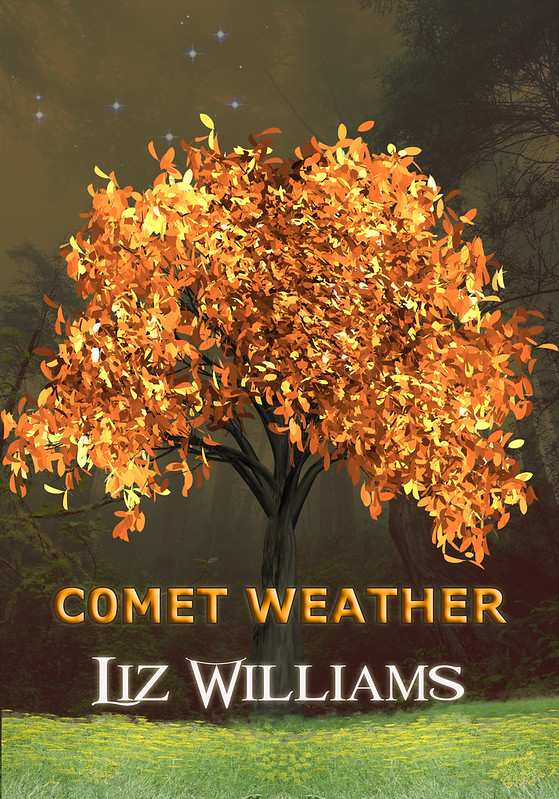 Author Liz Williams has spent more than a little amount of time pouring herself into her contemporary fairytale, Comet Weather — more time, in fact, than she ever imagined she might. In today’s Big Idea, join her as she describes what went into crafting this female-led, Somerset-based series, and why it was worth the wait.

I wrote Comet Weather over the course of a decade – embarrassingly, since I usually write a novel in a year, and sometimes two novels. It was my ‘fun’ project: my publishing career had slowed significantly, so I decided to just write for fun. I made a bucket list of everything I’d like to see in a novel (comets, rocking horses, church bells, pirates, old houses, weathercocks) and put them into it. I was aiming to create the atmosphere of the books I loved when I was a young reader: Garner, Boston, Masefield, Cooper, Goudge. But I wanted to write that sort of book for adults: a novel that had the same dream-like quality, a touch of time travel, but also a feeling of reassurance, and one which drew heavily on British folklore. There were a few factors, however, which were consciously a little different.

Firstly, I think a lot of British Celtic mythology has been done to death. This kills me, since I am of Welsh and Scots extraction and I identify as a Celt. Also, the mythology around Arthur and Glastonbury – where I actually live – has been mined to the point of literary exhaustion, too. I wanted to move away from well trodden territory, so although I set most of the novel in Somerset, there’s no mention of Avalon or Merlin. I tried to draw on aspects of the folkloric culture that have not been so heavily explored, such as the Behenian stars.

Mooncote, the house in the novel, is haunted by the spirits of the fixed stars, the celestial bodies that were most influential in Arabic and later in English astrology – Spica, Arcturus, Aldebaran and their sisters. I drew on the stories around the white chalk figures of neighbouring Wiltshire and Dorset, and the lych paths, the old ways on which corpses are borne to the churchyard, and the spectral lore of Dartmoor. In the sequel, Blackthorn Winter, I’ll also be visiting Elizabethan demonology, grimoire magic, and late nineteenth century occultism.

It became clear as I was writing the book, and thinking about the rest of the quartet, that I wanted to set these novels specifically in southern England. This is a fascinating part of the country, and not hugely explored in fantasy. I wanted to do for the south of England – white horse country, the Jurassic coast, Cornwall and the great city at the heart of the south east, which is of course London – what writers like Alan Garner have done for Cheshire. Although I don’t have Garner’s intimate ancestral understanding of dialect, I come from Gloucester and most of my life has been lived in the southern counties: Sussex for many years, and now the West Country. My own ancestors are named in the Civil War (the English one) and I know exactly where, and from whom, my ancestry comes. This is a privilege, but it is one of which I intend to make full use.

And I also wanted to make this a very female-centric novel – by no means my first endeavour in these waters, since I’ve written a number of books which barely feature men at all. The men in this novel are supporting characters: the stories belong to the four sisters who are the book’s protagonists, and the men are along for the ride. Their role is to support the women, and romance, while present, is not a central theme.

I wanted to write a book in which women were unapologetic about being in the world, which all four sisters are in different ways, and in which they weren’t traumatised. I’ve written a lot of novels in which women have suffered some awful things, but this isn’t one of them. Bad things might happen, but the Fallows bounce back. They take the magic of their world for granted, but they’re not particularly ‘feisty’: the super-tough weapons-carrying urban fantasy heroine doesn’t make much of an appearance here, because I think she’s become a stereotype. I don’t walk down the street carrying a crossbow or a sword myself, though I might have a whack at a home-invading entity with a random golf club, as Stella does in the novel.

Some years ago a dinner guest remarked to my (male) partner: “You’re not much troubled by self doubt, are you?” Without making the characters too full of themselves, I wanted them to have a degree of self confidence, too. They’re OK with who they are; Luna, the youngest, is still gaining that confidence but learning from older women. Over the past couple of decades we’ve been getting into genre territory in which female characters are only respected if their behaviour follows enculturated expectations of male behaviour….yeah, no. There are lots of ways of being.

Writing the book was, as I mention above, a slow process: this was my escape pod from a number of factors, including the financial crash, trying to save a business, and my father’s final illness and death. Thus there were long gaps in between writing chunks of the book: I saved them up, rather as readers save up books that they love and try not to finish them too quickly (readers have reported doing this with Comet Weather, a huge compliment to its author). So this was a writing process which I actively enjoyed, and although I roughed out an outline, it changed over the decade and the plot was primarily pantsed.

And on a final technical writing point, in writing four protagonists, I had to key in to their voices: Stella’s is the closest to my own voice, although she’s a lot younger, and people who know me have picked up on that, probably because we both swear so much. Their voices are English, and contemporary: if you like the deeply organic growth of the language as it is spoken by modern Brits, you might like this. But the house, Mooncote, is also a character: my long term love of books about houses (Green Knowe, or Moonacre Manor, which Mooncote is named after) comes to the fore here, too.

← This Hurricane’s For Real, People
Showcasing My Collection: Enamel Pins, Volume One →