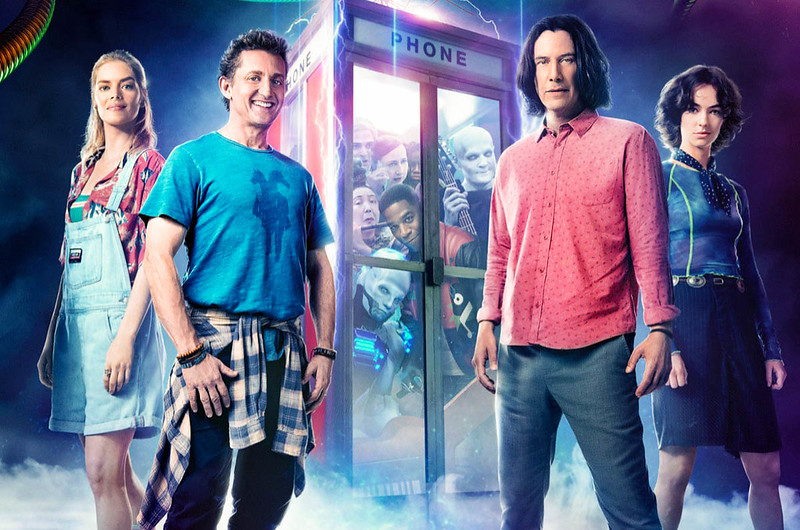 I enjoyed Bill & Ted Face the Music quite a bit, which is utterly unsurprising as I am both Gen-X, i.e., the generation of Bill and/or Ted, and also I used to live in San Dimas, home of Bill and Ted and the town in which almost all of this film takes place (fictionally; it doesn’t look like they did a whole lot of filming in actual San Dimas this time around). Also I am the fan of the first two films, particularly Bill & Ted’s Bogus Journey, the first film in history to successfully reference both Ingmar Bergman and the glam band Poison. What was surprising to me was that I teared up a bit at the end of this one. I know why, and I’ll tell you in a bit.

But first let me talk a little bit about why the Bill & Ted films, including this one, work at all. It’s because, despite their silliness and Gen-X’s general reputation for being deeply saturated in irony, Bill and Ted are genuinely and guilelessly sincere. They’re happy when they’re happy, sad when they’re sad, they like who and what they like, and when they’re called upon to save the world, they square up their shoulders and get to it even when they’re aware that it’s improbable, and possibly irresponsible on the part of the universe, that they are the ones called upon to do it.

They’re holy fools, basically, second cousins to Chance the Gardener and Forrest Gump. They have to be; if they were any more self-aware than they are, these slender and conceptually fragile films wouldn’t fly. Bill and Ted would be too full of doubt and self-recrimination, especially by the time of the third film, when they have been trying to save the world through music for two and a half decades, and consistently failing. If they were more reflective, they wouldn’t still be at it. They’d be co-owners of a Pretzels & Cheese franchise since 2002.

Indeed, when the third film starts, Ted “Theodore” Logan and Bill S. Preston, Esq. (Keanu Reeves and Alex Winter), are as close to self-reflection as they have ever gotten; their moment as the hottest band in the world is long gone, their careers are over, and their marriages and personal relationships are precarious because they still keep trying to plug away at uniting the world through song, even when their songs are, well, discordant. After a disastrous wedding gig, the two of them are seriously considering packing it in.

Then of course someone arrives from the future, with a new mission for them: Put together the song that unites the world, or the universe collapses. Oh, and they have seventy seven minutes to do it. Go. Off they go in their physics-bending phone booth.

The story wrinkle this time: They’re not the only ones crossing the time streams. Their kids, Thea and Billi (Samara Weaving and Brigette Lundy-Paine), who appear as sweetly aimless and musically obsessed as their fathers, get hold of their own temporal conveyance to put together a most excellent backing band for their dads, so that when they show up with a song, there will be people to play it. Things go awry, as they do, which occasions a family reunion in Hell, as one does, on the way to an entirely unsurprising and yet emotionally satisfying climax.

Bill and Ted are not enormously self-aware, but the film is and its screenwriters (Chris Matheson and Ed Solomon) are, and one of the most important things they are aware of is that times do change, and time does change us. Holy fools though they are, Bill and Ted do some learning over the course of the film, in a way that allows them to grow up while still keeping to the core of who they are. I figured out a particular plot twist in the film early on, so for me the question was how Bill and Ted would both earn that twist and respond to it. I was pretty happy with the outcome.

And with the film. The film is, bluntly and baldy, optimistic at its core, which feel likes a radical thing here at the end of August in 2020. The idea that there could be one song that brings the whole world together is nothing but a wish, but when the film makes a run at it, it feels like a good wish, and it feels good that people who are decent and kind, as Bill and Ted, and Thea and Billie, and indeed the entire Preston Logan clan are, stand up to be the ones to take that run at it.

Kindness, decency, optimism and guilelessness: That’s why I teared up a bit at Bill & Ted Face the Music. Which was not what I was expecting to do. But I was fine with it when it happened. Turns out I needed it, and a little bit of Bill and Ted, right about now.