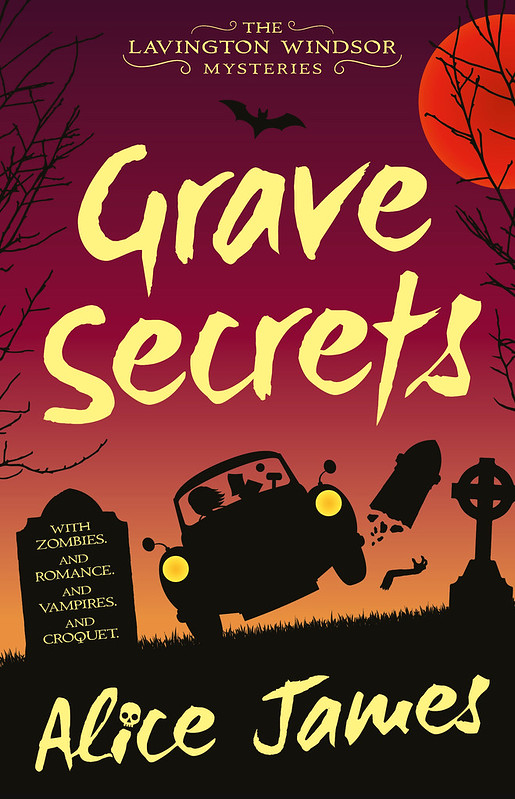 How can someone without a heartbeat find true love? Take a walk between life and death with author Alice James’ latest novel, Grave Secrets, and find out what zombies have that living men just don’t.

What’s in the brain of a brain eater?

Why on earth did I write Grave Secrets? I had been focusing on my children’s fiction, my financial writing, my magazine work… The bills were getting paid. I had finally landed a gig as a travel writer. The trouble was that these milestones might look all very well on a CV – but I just have this thing about zombies.

It’s hard to express, even though expressing myself is the thing I’m meant to be good at, but let me try. I’m the one who moved into a chapel with gravestones in the garden. I’m the person who’s filled it with skulls – ceramic, glass, real – scattered where most people put seashells and vases. (I’m also the ex-Goth with the spider obsession and all the Sisters of Mercy posters who is still kind of wondering when Andrew Eldritch will ask me out, but that’s a tale for another day.) I feel this odd draw to the dead. In a graveyard, I feel moved by the stones and what lies beneath them. Their occupants feel bewilderingly real to me, close, almost tangibly so.

I wonder where it came from? I see it at work on my library shelves. Nothing makes a book more enthralling to me than the feeling that the casual darkness of the world that we see hides an even darker otherness, and that if you tug aside the fragile veil of reality, the numinousness of that unfathomable realm will begin to ooze inside…

And nothing achieves that better than a healthy – or unhealthy – dose of the undead.

It’s the idea that shuffling off this mortal coil could maybe have a reverse gear that does it for me. You know, the concept that the final curtain could be raised again for an uncanny encore that’s neither truly alive nor dead. That’s the core of the underlying horror in Dracula – that if you try to cheat death, you are cheated in return. You get back this amoral creature who can only survive by draining the living to sustain what should be resting peacefully six feet under.

The thing is that vampires have been slightly sanitized since Bram Stoker penned his masterpiece. They are sexy, cool, sparkling (wasn’t me!) and wear a lot of black leather. Now, there’s nothing wrong with vampires in black leather (James Marsters in his duster coat is high on my inappropriate fantasy list, as is Alyson Hannigan in That Corset Scene). But – with the exception of the exceptional Rob Thomas – no one’s got round to rehabilitating zombies very much.

And that’s what I wanted to do; I wanted to write from the perspective of the zombie. I wanted to explore what it might be like to leave death behind and be raised from your grave, hungry for brainzzz and wondering why you aren’t in a comfy coffin any longer. But to do that, your zombie apocalypse can’t be truly mindless. They must have an inner monologue with a broader vocabulary than: “Grr. Argh.” So I created Bredon, the most courteous, loyal and charmingly attired famished revenant ever to be summoned to a graveyard near you. I was going to write (wait for it) a short story about zombies.

I know, but that’s all that I planned. It was going to take a week. I had it all mapped out. There was a short story competition I had been eyeing up and it would be just the thing. But the words kept coming, the narrative was flowing, the short story deadline passed unnoticed, the heads were getting ripped off, Toni was falling in love, the shambling hoards were marching across my screen… So I just kept writing.

I mean, I had to! No man is an island, be he dead or alive, so I had to populate an entire landscape for my reanimated corpse to stride across. There needed to be plot – a whodunit and a romance as it turned out – and some metaphysics about what goes on when the souls of the living hang around rather longer than their use-by date. As it turned out, there also had to be some shagging scenes, because my attention span is short. But most importantly of all, let’s not forget that this is a book about zombies. And I know the rules…so there had to be a fair amount of gore. I won’t add spoilers by counting up how many heads get ripped off, or hearts torn out, but rest assured there are plenty. I mean, we might be into double figures, and the book is only three hundred pages long.

So there we are, the big idea. And it kind of worked. I love the book even though I never planned to write a book. I love the romance, even though I really never intended to write chick lit. I adore the cosy crime plot twists despite them sneaking in almost unbidden because they just worked out like that. And I treasure my zombie, the one element of the story that was always going to be written. I’m also stoked that it’s been published, because that was never, ever in the plan, even the director’s extended cut.

I didn’t answer my own question, though, as to why I am so beguiled by the undead. But I have a lot of sequels to work on, so maybe I will work that one out too.

← My Brain Is Empty So Here’s Some Flower Pictures
Occasional Reminder: Don’t Send Me Story and/or Collaboration Ideas →