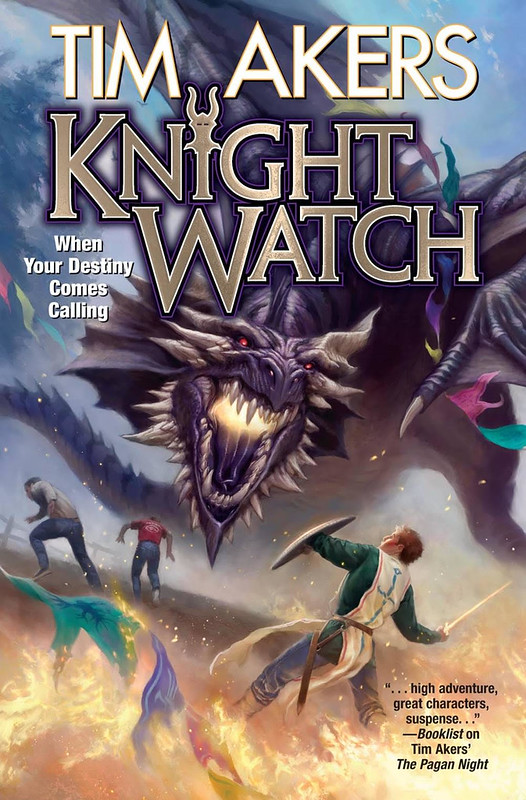 There’s the book you’re meant to write, and then there’s the book you write because it just seems like it would be more fun. Guess which book Knight Watch is! Author Tim Akers is here to explain how it came to be.

Knight Watch wasn’t the book I was supposed to be writing. I had just finished a massive epic fantasy trilogy and the expectation was that I would continue with something in line with that. Brand identity, and all that nonsense. So I produced a pitch document for my agent, and he passed it around the office, and after a little discussion we agreed on a slightly less massive and yet still epic fantasy novel that I had been kicking around in my drafts folder for the last four years.

That book is still in drafts. Someday I’ll finish it. Honest. Just not… today. Because about halfway through the first draft, Knight Watch fell into my head. Not fully formed, and certainly not in the form that will appear in bookstores today, but the beautiful, glimmering core of the novel just appeared in my head at four in the morning. I lay in bed staring at the ceiling and thinking about it and when my wife finally woke up (seriously, woman, I have a book to tell you about, WAKE UP) I spilled the whole thing to her and she said “That sounds nice” and then rolled over and went back to sleep. And with this bold endorsement of my genius, I started to secretly write the book.

So what was that brilliant idea? Well, basically, it’s Men in Black but at the Ren Faire. That wasn’t how I thought of it at first, but people kept asking me about the book and I would produce all these complicated explanations and their eyes would glaze over, so I came up with the purest form of the idea. You’ve seen Men in Black? Yes? Well, that, but at the Ren Faire. Result.

As for the complicated explanation? We all have things that make us incredibly happy. For me, that’s some combination of my time in college when my friends and I made our own version of the Society for Creative Anachronism, late nights spent playing D&D (where I met my wife), and memories of my father reading PG Wodehouse to me when I was a child. So I threw all those things into a book. In a lot of ways, this book is the closest expression of my inner life I can imagine. It has knights, snark, Crossfit worshipping dragons, a bookstore in a mall (which might be stretching a reader’s willingness to suspend disbelief), a secret society that takes its brand identity very seriously, a fantasy novelist who works entirely in adjectives and detailed maps, and precisely one million dogs. What could be better?

The real trick in writing this book was that I didn’t want bad things to happen. Every time I got to a new section I would think “Well, if I was reading this, what would I want to happen here?” That’s how we got one million dogs. That’s how I ended up with a character whose best friend is a cartoon dragon in the real world, but in the Unreal world it becomes a violent, psychopathic dragon who tries to burn his castle down at every opportunity. And as any good writer will tell you, that’s a terrible way to write a book. There needs to be tension, and setbacks, and revelations that change the direction of the narrative, and… look, I’m not going to walk you through Syd Field’s Paradigm. The point is that bad things have to happen to people the reader likes, and when the writer is the Prime Reader, that kind of sucks. But you don’t get into the business of being a writer to be happy, you fool.

Or maybe you do. Because there was something about writing this book that was such a relief. It wasn’t the book I was supposed to write, but it was the book I had to write. It was the book I wanted to write more than anything, and the process of creating the world, meeting the characters… heck, just the act of writing it has been one of the most fun experiences in my *mumblemumble* long writing career. And maybe that was the real quest reward all along.