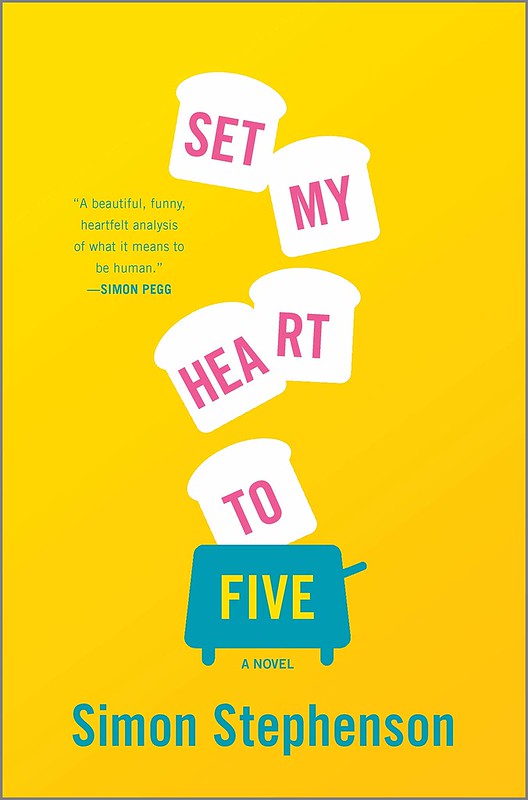 Not too long ago, Simon Stephenson had a chance encounter that rocked him to his core and made him question some of his long-held assumptions. No, it’s (probably) not what you think. But it was an event that set him on the path to his novel, Set My Heart to Five. Are you prepared to learn of this fateful event? Spoiler: It involves dental hygiene!

A few years ago, I spent a night in a chain hotel after a long series of international flights.  I arrived after midnight, took a shower and an Ambien, and then discovered that I had forgotten my toothpaste. I called down to reception and ten minutes later, the doorbell on my room rang. I threw on my robe, grabbed a few dollars for a tip, and opened the door to reveal the creature that had perma-stalked my childhood nightmares: a Dalek.

For a moment, my Dalek and I stood in silent contemplation of each other. I had outrun them for decades but now Davros’ mechanical foot soldiers had caught me: alone, tired, drugged, be-robed and with no real weapons to defend myself except a Gideon bible and that thing they leave in hotel rooms that has something to do with shoes. Too late, I now understood that this had been my inevitable destiny all along: maybe you can escape the small screen Daleks by hiding behind the couch, and outwit them in real life by climbing stairs, but they have possessed advanced time-travel technology since at least the Last Great Time War and so were always going to catch up with me at some point. I sighed, and prepared myself for extermination.

But no death ray emanated. Instead, the Dalek’s head popped open to reveal not a furious irradiated mutant but a small tube of toothpaste. The Dalek beeped insistently until I removed the toothpaste; as soon as I did this, his head closed back up, and he turned and trundled back down the corridor. Not only had my nemesis not exterminated me, he had not even given me a chance to tip him.

Like an infuriating protagonist in a bad horror movie, I set off in pursuit of the danger. At the lift hall, I witnessed my Dalek do something that will no doubt strike fear in the hearts of Time Lords everywhere: he wirelessly summoned the elevator. I took a deep breath then followed him in, and together we began our uneasy descent.

You know the oppressive silent awkwardness you feel when alone in an elevator with a stranger? It is infinitely worse when that stranger happens to be a Dalek. At the seventh floor, an unsuspecting family joined us. The parents were happily oblivious to the killer in our midst, but the wide-eyed kids visibly understood our peril. The brother whispered something in a language I did not understand, but his sister’s reply contained a universal word: ‘Dalek.’

‘It’s okay,’ I reassured them, ‘I think this one is actually a good Dalek.’

The family all stared at me, and even the parents now seemed horrified. Perhaps they knew there was no such thing as a good Dalek, maybe they had not understood me, or perhaps a forty-year old man in a robe simply has no business talking to other people’s children in a hotel elevator after midnight. The oppressive silent awkwardness only worsened.

When the doors finally opened to the lobby, the family hurried out and my Dalek trundled across the floor to take up post by the desk.  I followed him and stared at him until the night clerk asked if there was something he could help me with? I looked down at my robe, at the toothpaste in one hand, and the few dollars in the other, and tried desperately to make sense of it all. I could not. I placed the dollars on the desk, and headed back upstairs to my uneasy dreams.

When I woke the next morning, I assumed I had imagined the Dalek at my door. It would not be the first time Ambien and jet lag had conspired to blur the boundaries of reality for me, but as I checked out, I saw he was still stood at attention beside the desk. Perhaps he was not exactly a Dalek – there was no manipulator arm or death ray – but he was nonetheless a chest-high cylindrical robot, so it had been an easy mistake to make.

As humans, we are inherently suspicious of the future. No doubt there is an evolutionary advantage in this wariness, because while we can protect ourselves in the known present, who knows what dangers the coming seasons may bring? Perhaps this is part of the reason we love to read about dystopias. They reassure us we are indeed correct to worry, and help us plan for the worst: what will we do when the fascists seize power, when the extra-terrestrials invade, when procreation fails?

Increasingly, though, we seem to worry more about technology than almost anything else, the genocidal AI having replaced the witch and the vampire as the designated bogeyman of our times. And, of course, we indulge in these worries while each day alternatively ignoring and feeding the infinitely more murderous elephant in the room, the climate emergency.

And so, this is my big idea: what if the robots don’t want to exterminate us, but simply bring us our toothbrushes? And what if in turn, we humans – with our suspicion, our aggression, our beloved right to bear our death-rays and our merciless late-capitalism – are the real Daleks? That plucky little room service robot only wanted to help me clean my teeth and asked for nothing in return. I repaid his noble efforts with fear, suspicion, stereotyping and – to add insult to injury – by going down to the lobby myself anyway.

Over the next weeks and months, my little misunderstood room service robot stayed with me. I began to think about an android that was the best of us – kind, optimistic, joyful, innocent – attempting to make his way in a world that was the worst of us. Not the dystopian worst, but a more everyday kind of worst: a mildly self-centered, petty, careless and casually-prejudiced worst. A world where humans have locked themselves out of the internet by forgetting the names of their favorite teaches and first pets, where Elon Musk has blown up the moon, and yet the villains of every blockbuster movie are nonetheless genocidal robots.  A world where we have androids, but make them do our worst jobs and incinerate them at the first hint of them developing anything resembling feelings.

That is the world of Set My Heart To Five, and the story is narrated by an android called Jared. Oh, and Jared’s programmed job?  Well, he is a dentist, of course.