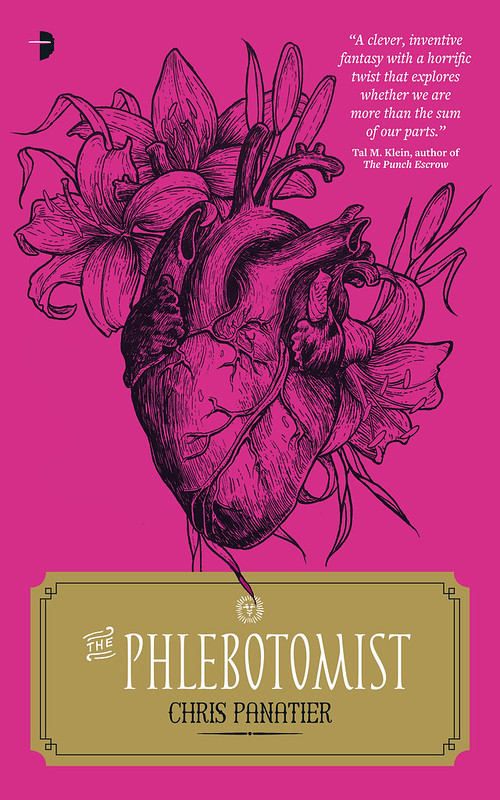 In a near-future irradiated America, blood still runs red, but its value has changed. In The Phlebotomist, author Chris Panatier takes us through a post-war world where human’s tendencies towards altruism, prejudice, and control all pivot on the tip of a butterfly needle. Read on as he explains more about its conception and evolution.

It was January 24th, 2018, and I was going to bed angry. The U.S. Government was in the midst of passing a colossal tax cut for the rich to the tune of some seventeen trillion dollars, while doing almost nothing for the lower and middle classes. Lying there on the pillow, I only grew more exasperated, to the point where I actually growled, “What a bunch of f—— REDACTED.”

Only one of those was a curse word, but to unredact the rest would be to spoil. Nevertheless, it was in that moment of rage that the central premise for my debut novel, The Phlebotomist, kindled.

Good news: it’s not a story about tax cuts. But it is very much about power, and the lengths to which people will go to obtain and hold it. It’s happening as we speak, with the President of the United States sabotaging the Post Office to suppress the mail-in vote.

In the near-future world of The Phlebotomist, post-war radiation sickness has led to a government-mandated blood draw. Every forty-five days, each person sixteen and up is required to give a pint at their local donor station. This is the Harvest. People can also sell extra for cash, which everyone does because automation took all the jobs. It’s all overseen by a government blood contractor called Patriot.

Not all blood is valued the same. Price is dictated by each type’s compatibility for prospective recipients. The more compatible your blood is, the more money you have. Those with less compatible types, the low bloods, have very little and live in poverty. By the time we arrive in the story, society has long been segregated by blood type.

Segregation takes many forms and occurs for all sorts of reasons, some de jure and some de facto. There can be one, or a combination, of racial, socioeconomic, ethnographic, religious, etc., justifications or reasons for it. The Phlebotomist posits another – blood type – and builds an economy on top of it. The way that patriotism can be harnessed and commandeered to do that which is antithetical to patriotic ideals is the big idea.

Our main character, phlebotomist Willa, is forced to confront how it all came to be; How things got to the point where the government was harvesting the blood of its own people. In her world, the downward slide into authoritarianism started with a national tragedy, a nuclear bomb:

It had changed the world so drastically and all at once, that what came
after – a new way of living in the name of national defense – was expected,
embraced even. Changes came, always in the name of the Greater Good.
Changes in everyday life, like the subtle expansion of surveillance and police
powers. Like the restrictions of rights, after few had questioned it and even
fewer opposed. Incremental steps that, looking back, had amounted to gradual surrender by the people of what little freedom they’d had left. Willa wasn’t formally educated, but she was a student of her own six decades, and from that she’d identified a pattern: tragedy begat patriotism, patriotism begat opportunism, opportunism begat poverty.

We saw something like this play out right here in the U.S. with the ironically titled Patriot Act, that became a tool of the government to monitor and surveil its citizens with little or no probable cause or repercussions. Of interest to readers, the Act gave the government the authority to obtain library records and other information about citizens’ reading habits. I doubt we will ever know the full extent of how much we gave away; i.e., what the government watched and recorded. But it was the country’s rush to embrace and exhibit patriotism in the wake of what had happened to us on 9/11, that allowed the Patriot Act to go through with such little opposition. It was passed in 2001 with a four-year term. It lasted all the way until June of 2020. Once governments gets power, they are loathed to relinquish it.

The setup for The Phlebotomist is an example of how patriotism and altruism in the wake of tragedy can be redirected by those in power to leverage liberty in order to enrich themselves in both authority and treasure.

Now might be a good time to say that The Phlebotomist is not a political screed, but actually a fun and humorous adventure with a diverse cast of characters! No, seriously. And while the story is, at its heart, a new take on the REDACTED trope, I hope that some of these themes will have readers watching their leaders with a critical eye; especially when the flag-wavers come seeking the voluntary surrender of rights under the banner of patriotism.