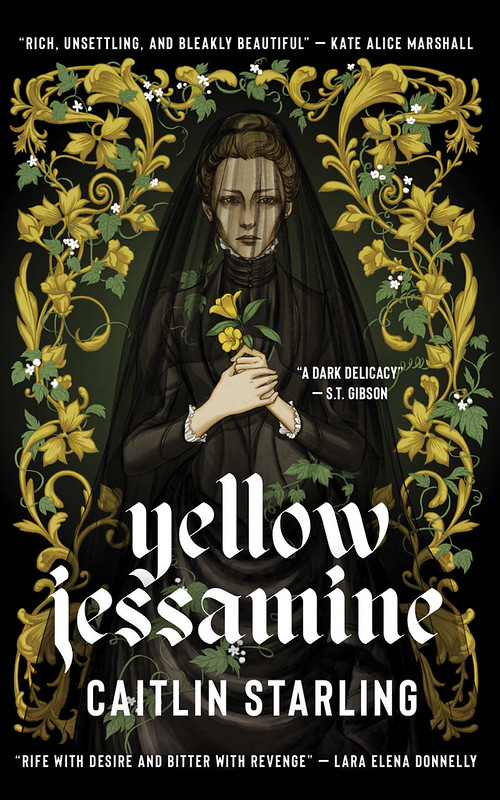 When I was first drafting Yellow Jessamine, I described it in meme-terms to a friend as:

“Sometimes a family is a murderous noblewoman playing at mercantile dominance and weekend gardening, her head of household staff who would scorch the earth to make her happy, a local law enforcement officer who hasn’t noticed the bodies piling up, and a traitorous soldier she blinded and locked in her spare bedroom.”

It’s a pretty thorough, if flippant, pitch for the book, and it went hand in hand with a fever dream of a cover idea that I had around the same time: our protagonist, Evelyn, draped in her mourning black and entangled with the naked bodies of her assistant, that judiciary officer, and her kidnapping victim. Grotesque intimacy, or the illusion thereof – that’s what I was trying to get at.

Yellow Jessamine is, first and foremost, a story about isolation – but unlike my first book, The Luminous Dead, that isolation is set off by a sizeable (for me, anyway) supporting cast. Evelyn is not alone because she’s stuck in a cave; she’s alone because she refuses to accept any offering of emotional support from anybody around her.

Evelyn was, in some ways, very easy to write. Her defenses, while exaggerated, are familiar to me. It’s easier to handle grief if you refuse to let yourself care; it’s easier to work and isolate than to reach out and risk being judged, hurt, abandoned. It’s easier to avoid attachment than to handle the weight of others’ love and nurture a relationship. But detachment has consequences. Patience is not endless; push somebody away enough times, and they will probably leave for good. And when the storm comes, it can be impossible to weather it alone.

There are so many instances in Yellow Jessamine where things could have gone differently, where somebody reaches out and offers Evelyn a different path. Sometimes she notices and rejects it out of fear; other times, it’s left to the reader to see the opportunity Evelyn has entirely missed. Violetta, Evelyn’s assistant, not only enjoys her job, but is in love with her taciturn, mercurial mistress. Linden Pollard, local judiciary officer with a heart of gold, actively attempts to insert himself into Evelyn’s life in order to protect her, much to her horror. Both are willing to jump to her defense, to give her the benefit of the doubt, even to break laws and risk their lives to help her.

And that soldier comes to Evelyn’s door for a reason.

Perhaps most importantly, though, the world that Evelyn thinks she lives in has changed, markedly, since she was a child. The rules are different now; the threats she has built her walls up against have changed form. Avenues that were closed off to her back then have now opened. She has power, power to improve her life and the lives of those around her.

But deep down, she’s still a little girl: ashamed, abandoned, defensive because without that prickly exterior, she would have suffered even more dearly.

Writers like to talk about taking a certain amount of glee in tormenting our characters (and, perhaps, our readers), but I often found myself wanting to fix things for Evelyn. To take away those opportunities for connection instead of letting her miss them, or to allow her to be happy. To write about how terrible things had been done to her, and to erase or obscure the terrible actions Evelyn later took, influenced but not excused by her past.

Except that wasn’t the book I wanted to write. I wanted to write a book where our protagonist was confronted with the outcome of her decisions; I didn’t want to punish her, necessarily, but I didn’t want her to be able to avoid those consequences, either. Instead, by methodically laying bare how her anxieties and mistrust and inflexibility have shaped her life and the lives of those closest to her, I hoped to give her, by the end, the dignity of understanding herself.

Evelyn is not incapable of affection; she is only incapable of acknowledging it. In another book, she might have at last found not only real companionship and support, but also a way out of the predicament her actions have led to.

But this is still a tragedy, a horror story. Salvation is close at hand, and Evelyn will grasp it until it’s too late.