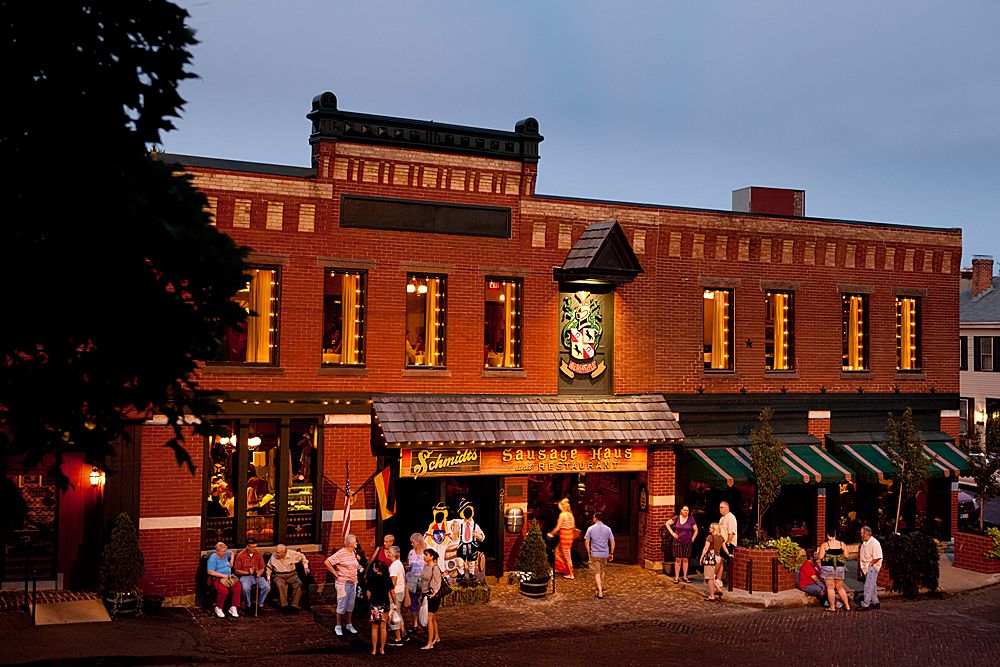 (photo is from before pandemic, don’t worry)

This past weekend I took a stroll down to German Village in Columbus, Ohio. My pals and I perused some shops, admired the architecture, saw two super cute cats, and best of all, ate at Schmidt’s Sausage Haus und Restaurant, which from here on out I will be calling Schmidt’s.

Perhaps you’re wondering why out of all the restaurants in Columbus, I chose to go to Schmidt’s. I’m glad you asked! It’s actually a very short tale. Back in the fall semester of 2018, I took German 101 at Miami University, and learned pretty basic German, as is to be suspected when you take a class called German 101. One of the chapters was entirely about food, cutlery, how to order at a restaurant, etc. So after learning about wurst and sauerkraut and apfelstrudel, I decided I simply had to try it. I’d never had German cuisine before, so I sought out a German restaurant, and per a Google search, I discovered Schmidt’s. Somehow, it took me two years to actually go and try it, but here we are! We made it. And boy howdy was it worth the wait!

I know that venturing out and eating at restaurants is a dangerous game in these “unprecedented times”. However, Schmidt’s has taken several precautions to promote a safe environment, such as hanging up clear shower curtain-like plastic sheets in between socially distanced tables, having people wait outside so as not to crowd the waiting area inside, and having you look at the menu on your phone by scanning a code instead of handing out physical menus. My friends and I wore our masks, of course.

After thoroughly scanning the menu, I decided I simply had to go with the sausage sampler platter. When in Rome, and all that. Four different sausages, hot sauerkraut, German potato salad, chunky applesauce AND a side of bread made up this amazing plate.

The sausages were, in a word, delicious. I’m not even a big pork fan, but these sausages were seriously good. There was one of the four that had a bit of a kick to it, and normally I hate spicy stuff, but it was actually quite tasty! My friends tried a bite of each of my sausages and all of us agreed it was some truly bangin’ sausage. The sauerkraut and potato salad were excellent as well, and the applesauce was surprisingly great, like probably the best applesauce I’ve ever had. It was sweet, cinnamony, and a little chunky, as the name “chunky applesauce” suggests. Even the bread was slappin’! All around, a fantastic platter that I would highly recommend.

My friend got the Haus Saurbraten, which is marinated beef over spätzel noodles with gingersnap gravy, and mashed potatoes and green beans for the side. I got to try some of it and it was definitely good, but the gingersnap gravy was the true star of the dish, it had such a unique flavor! My other friend got the loaded potato soup, and no surprise, it was delicious.

Can you really review a restaurant if you don’t have dessert, too? I mean, probably, but it doesn’t hurt to also have dessert. So, I got their famed 1/2 pound cream puff to split with my friends, as well as their German Chocolate Cake, because, duh, it’s German! They have a couple different flavors of cream puffs, and we ordered the black raspberry chocolate chip one. It was so yummy, the cream was fluffy and light, the pastry itself was perfectly airy and golden, all around it was awesome and we devoured it. The cake was pretty okay, the frosting was probably the best part of an otherwise very normal chocolate cake.

All in all, an awesome place to eat, I definitely recommend checking it out if you’re ever in Columbus! I’m very glad I got to go and I’m hoping to go again soon. I honestly might just end up ordering the exact same thing again because it was so good. Even if I don’t eat there again next time I’m in Columbus, I’ll be sure to stop by and get a cream puff to go, because wow.

If you’ve been there, tell me about your experience in the comments! And have a great day!