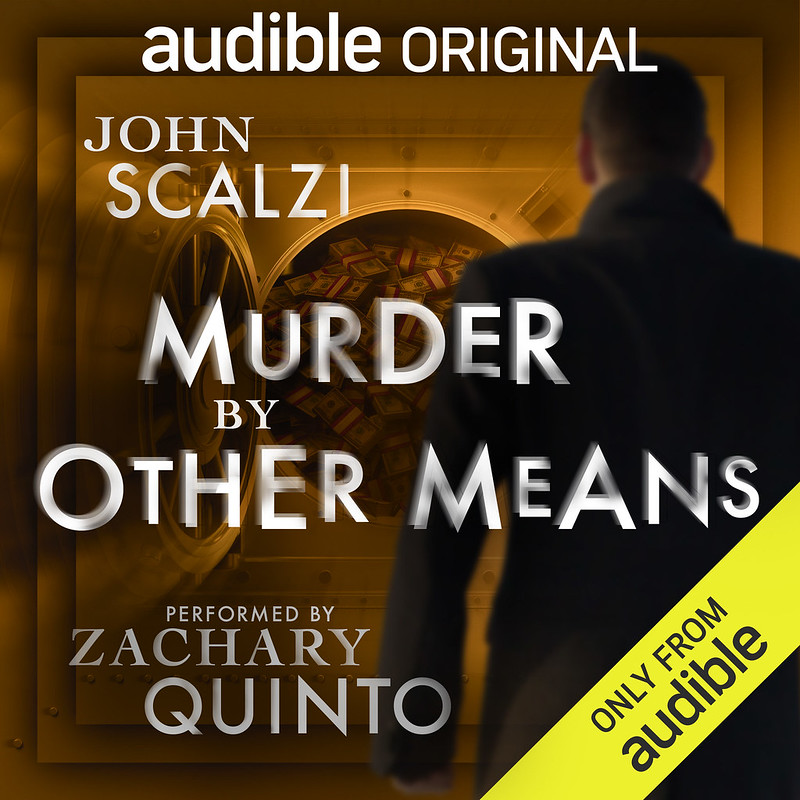 Today’s the day! Murder By Other Means, the second installment of the the “Dispatcher” series, is now available on Audible! Like The Dispatcher, it is performed by the estimable Zachary Quinto, and once again the story is filled with intrigue and danger, in a world where murder is a near-impossibility.

What is this one about? I’m glad you asked! Here’s the promotional text:

Welcome to the new world, in which murder is all but a thing of the past. Because when someone kills you, 999 times out of 1,000, you instantly come back to life. In this world, there are dispatchers – licensed killers who step in when you’re at risk of a natural or unintentional death. They kill you – so you can live.

Tony Valdez is used to working his job as a dispatcher within the rules of the law and the state. But times are tough, and more and more Tony finds himself riding the line between what’s legal and what will pay his bills. After one of these shady gigs and after being a witness to a crime gone horribly wrong, Tony discovers that people around him are dying, for reasons that make no sense…and which just may implicate him.

Tony is running out of time: to solve the mystery of these deaths, to keep others from dying, and to keep himself from being a victim of what looks like murder, by other means.

Pretty exciting stuff, if I do say so myself. As with The Dispatcher, Murder is novella length, which means it’s the perfect size for listening to around the house, and keeping you company on short trips and exercise.

How do you get it? Well, if you’re currently an Audible Premium or Audible Plus subscriber, all you have to do it hit up that Audible page I linked to above; it’s available to you as part of your subscription (as is The Dispatcher, the first in the series). You can download it instantly and be good to go. If you’re not an Audible Premium or Plus subscriber, or live somewhere the new Audible Plus service is not yet available, you can still purchase it from Audible, either with an Audible credit, or with actual money. Yes, actual money is still a thing!

I’m hugely excited to have this new installment of the Dispatcher series out in the world. I love writing this series and I love the fact that Zachary Quinto brings protagonist Tony Valdez and his world to life with his audio performance. I think you are going to like Murder a whole lot. I can’t wait for you to listen it.

Speaking of listening, I have a very special treat for you: “The Dispatcher,” the theme song for Murder By Other Means, written and performed by none other than indie music superstar Ted Leo. It’s having its world premiere right here and right now, for you, yes, you!

Can I tell you just how geeked out I am about Ted doing this song? I am super geeked out. I’ve been a fan of Ted’s for years, in pretty much all of his musical iterations. To have him make a song for Murder is just about the Best Thing Ever. I hope you love it as much as I do.

Happy release day to Ted, and Zachary, and me — and to you too! Come get a taste of Murder By Other Means. It’s ready for you to try!

← The Big Idea: Dan Hanks
Here’s Me and Zachary Quinto Interviewing Each Other About “Murder By Other Means” →