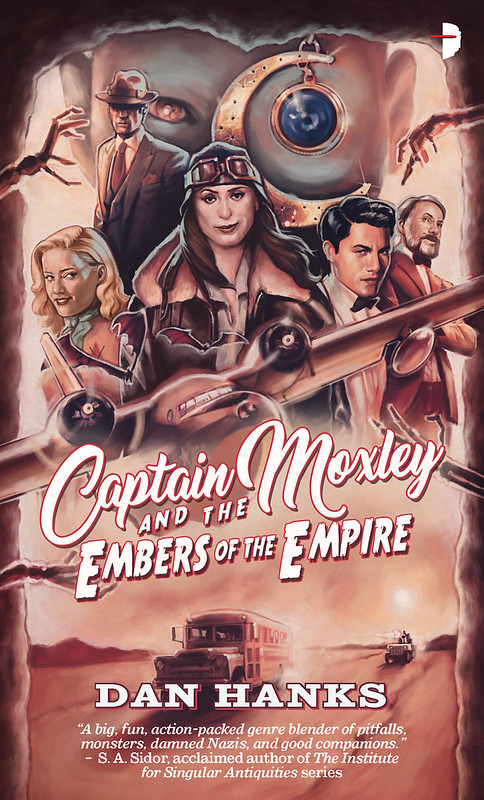 There’s a line, made famous from the movies, that Dan Hanks is thinking about with his newest novel, Captain Moxley and the Ember of the Empire. The problem is… that line doesn’t go far enough.

“It belongs in a museum.”

That’s the quote we all know and love, uttered as the bad guys try to steal the priceless artifact away from Indiana Jones. And when he says it, the audience is usually cheering him on. He’s the scientist with the archaeological smarts after all. He knows how much these artifacts could benefit the world, so he’s going to risk his life to give us the chance to see them. Pretty damn noble if you ask me.

That’s not really the whole story, is it?

Captain Moxley and the Embers of the Empire, was always meant to be a fast, fun, action-packed adventure in the Indiana Jones style. An entertaining beach read (or, I guess, ‘pandemic read’ now). However, it was also important to me to address some serious archaeological issues, in particular the colonial elements of these types of stories. I wanted to pull that aspect into the torch light and inspect it properly (while hoping it didn’t set off a trap).

The big idea here is that the famous “it belongs in a museum” line is only half complete. In a world where archaeologists and museums are being nudged to move beyond their colonial past, it deserves a follow-up:

Museums are inherently collections of artifacts often obtained without permission. There’s no getting away from that uncomfortable fact, no matter how much we’ve been taught to overlook it in favour of the benefits they offer.

Okay, yes, it’s tricky to get permission from the dead to show off their old coins, flints or ceramics. But a lot of material culture that goes on display is simply detritus and of arguably low personal significance to its past owners. (Burials and bodies are a whole other level of significance that would require a separate blog post/PhD to talk about.)

What I’m mainly concerned with here are artifacts of importance that quite clearly belong to other cultures or countries. Stolen items that continue to be displayed in usually Western collections, where the right to keep them might even be fiercely defended under some kind of weird, misplaced national pride.

In order to tackle this much-needed conversation in my book, I felt it important to give the characters opposing viewpoints on it. To give them the knowledge to raise issues I know I’ve often thought about and have them argue the point.

I was literally old-schooled in Western archaeological thinking, studying the subject at university far too long ago, and almost venturing along the path to becoming a Doctor of Archaeology. I worked in the heritage sector in Australia, where issues of ownership and permissions were front and centre of all Indigenous archaeological projects. And, more recently, I’ve been listening intently to traditionally silenced voices on the subject – voices that must now be hoarse after talking for so long about the false romanticism of stealing artifacts from their native lands and displaying for outsiders to ogle over them.

Of course, even with all this experience at my disposal, trying to inject it into a light-hearted, pacey action-adventure was challenging. Thankfully, readers always need a moment or two to catch their breath. It was in these quieter moments I was able to explore the topic more fully by making it a central conflict between our cynical, seen-it-all-and-killed-a-bad-man-to-get-the-T-shirt protagonist, Captain Samantha Moxley, and her younger, more blinkered archaeologist sister, Jess.

Readers will spot the theme elsewhere too. We also have an antagonist, Colonel Arif, who is a pretty awful human being, but who we sympathise with on some level because he’s right to be upset with westerners pinching things from his beloved Egypt. Meanwhile, the idea also helped bring the debate full circle at the end of the book, more closely tying the plot with the theme via a final revelation that poses a question the characters can’t answer… although maybe the reader can?

Thanks to my exploration of this big idea in Captain Moxley, I’ve come to more fully understand how possible it is to love something problematic, while also acknowledging its faults (as long as they’re not too faulty or beyond redemption).

Some of my favourite places in the world are museums. And I will continue to champion their importance as places of learning where we can protect and study our past, learning more about ourselves and where we need to go next. BUT in certain cases they also bring with them a range of issues relating to the collections they hold. We might be grateful that they’ve saved priceless artifacts from harm previously, yet if there’s a chance to repatriate them now, why wouldn’t we?

We can – and should – encourage them to do better. Which first means recognising the issues for ourselves.

As for Indy… well, I’ll always love his stories. I didn’t quite follow in his footsteps and became an author instead (which is much less muddy, but with infinitely more curses). Yet being on the outside of the profession has meant I’ve been in a much better position to write a love letter to it, while tackling its less desirable elements. And I think that’s important. Because, in the end, it’s time for our thinking – and these stories – to move beyond the Western romanticism of travelling the world obtaining artifacts, and for us to realise maybe they don’t always belong in museums.

At least, not ours.

Captain Moxley and the Embers of the Empire: Amazon|Barnes & Noble|Indiebound|Powell’s

← Trying New Places: Schmidt’s Sausage Haus und Restaurant
Murder By Other Means is Out on Audible + The World Premiere of “The Dispatcher” by Ted Leo →