Dude, That’s My Jam: A Review of Four Fancy Jams 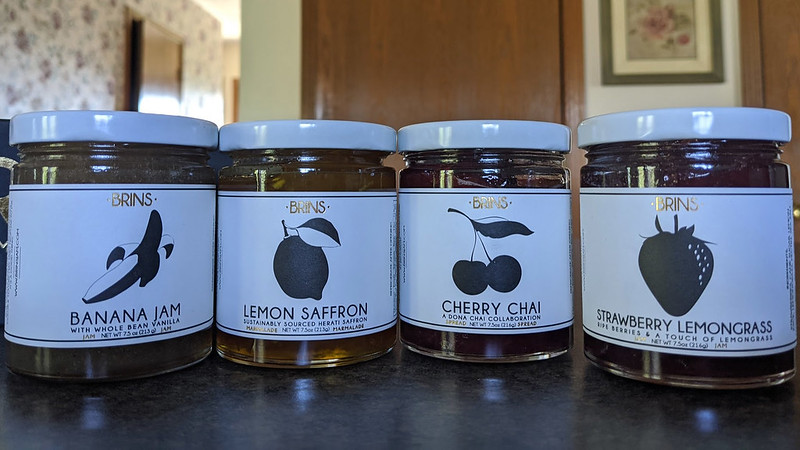 Here at the Scalzi Compound, we are big believers in jam. My mom and I just made homemade peach jam two nights ago, and my dad is a frequent buyer of “Frog Jam” at a local place, and it’s a general rule we don’t buy cheap jam in this household. Maybe it’s a little bougie, but we just really believe jam is one of those things worth paying a little more for, if and when you’re able.

So when I got an advertisement for Brin’s Jam & Marmalade and perused their website, I knew I had to get some. The advertisement (which I’m not entirely sure why I got in the first place…) was for banana jam, something I’ve never heard of, or even imagined was possible, which made me curious enough to click on their site. Other than their banana jam, I was also captivated by their cherry chai jam. If there’s one thing I love, it’s chai; so the idea of it being encapsulated in a jam form was definitely intriguing.

I consulted with my father about buying the jams and we decided to do a piece over it! So we bought the banana, cherry chai, strawberry lemongrass, and lemon saffron. We were originally only going to do the first three, but we decided we might as well get a fourth so we could get free shipping.

So I bought some fresh French country bread as well as sourdough from a local bakery that I used to work at, and my mom toasted some slices in a pan with butter, and we each tried the four jams. So without further ado, here’s our reviews of each of the jams! 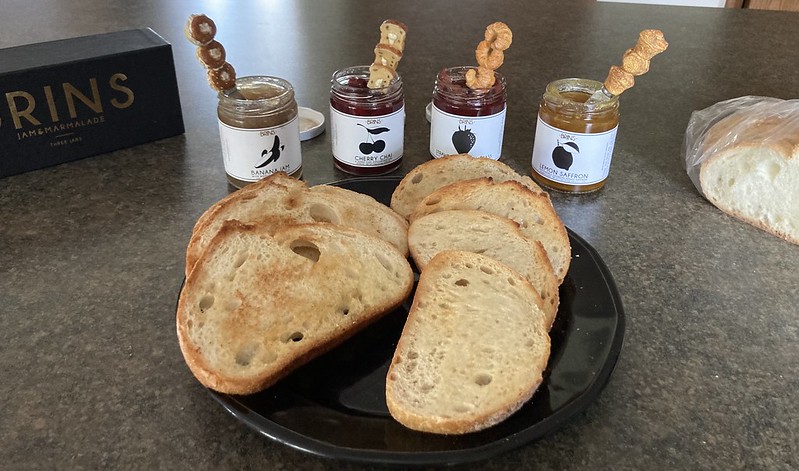 Since the banana jam is what originally caught my attention, we’ll start with the reviews of that one. My dad said it tasted like bananas and honey, while my mom said it really just tasted like banana puree, and both of them liked it, my dad gave it a 7.5/10, while my mom settled on 6/10. Meanwhile, I absolutely loved it, it tastes like sweet banana bread. I could honestly eat it with a spoon, I thought it was so good that I gave it a 10/10. It exceeded my expectations. We all agreed it would be great on a peanut butter, banana, honey sandwich. It almost had an applesauce-like texture, definitely a more runny jam, but that makes it super duper easy to spread! Overall, the combined family score is 8/10.

Next up was the cherry chai! Upon opening it, it smelled like a candle, and you could almost mistake it for a jar of maraschino cherries with how chunky it is. In contrast to the smooth banana jam, the cherry chai was so packed full of cherry halves and pieces that you could pick out a whole cherry from it. While my mom was a big fan of the chunkiness, my dad said he would’ve liked a smoother consistency (however, when you spread it on bread, it does smooth out a bit).

The consensus on this one was also positive! My dad said it made him think of when you’re a kid and you smell a candle, and then you end up tasting the wax, this is what every kid wishes the wax had actually tasted like, instead of, well, wax. My mom said it tasted way better than she thought it would. Originally, she was skeptical of it and was pretty sure she wouldn’t enjoy it, but she ended up giving it an 8/10, while my dad gave it a 7.5/10 as well. As for me, I thought it was really pleasant, it tasted a little tart, but also tasted like a coffeehouse, soft aromatic spices and warmth underneath the fruitiness. It was an 8.5/10 for me, making the family score another 8/10.

Third on the list is the strawberry lemongrass. Unlike the previous two, this one was not quite as hard a hitter. It kind of smells like strawberry jam, but if the jam had body odor, which my dad said was an exactly correct description. As for taste, it was completely ordinary in my opinion, I didn’t even really taste any lemongrass, though my dad claims it was too lemongrassy (though he mentioned the aftertaste is better), and my mom agrees it’s really just a weak strawberry jam. My dad said that if we had no other jam in the house, he would use it for a sandwich, but it’s not great. My dad gave it a 5.5/10, while my mom only gave it a 5/10, and I gave it a 6/10, making the total family score a whopping 5.5/10.

And last (and certainly least, in my opinion) is the lemon saffron. To me, it smelled like paint thinner, while my dad said it was more of a household cleaner scent. When we ate it, I couldn’t help but make a face, it was awful. I almost couldn’t take another bite, it was so disgusting. Meanwhile, my parents said it would be good if we had it on something other than buttered bread, like it would go well on a charcuterie board with prosciutto or some kind of cheese, but I don’t think I’d like it even then.

My parents gave it a low score, my dad with a 5/10 and my mom with a 3/10, but said that its potential score — were it to be paired with the correct ingredients — would be a 7/10, or in my mom’s case, a 7.5. However, I give it a flat 2/10. It is consumable, but just barely, and I certainly will not partake again. The family score on this is inconclusive, due to the potential high scores it could have.

Overall, the jams were good! I’m sure some of Brin’s other flavors are enjoyable, as well, but I’m glad we got the ones we got. If you want to try one or two of them but aren’t ready to commit, they do offer five dollar mini versions, whereas the full size ones are ten. I definitely recommend the banana jam and the cherry chai (but especially the banana).

I’m off for the rest of the weekend. Have a great day!

← The Big Idea: Elaine Mongeon and Glen Zipper
It’s Been a While Since I’ve Posted a Picture of Krissy, So, Hey, Look, It’s Krissy →

29 Comments on “Dude, That’s My Jam: A Review of Four Fancy Jams”