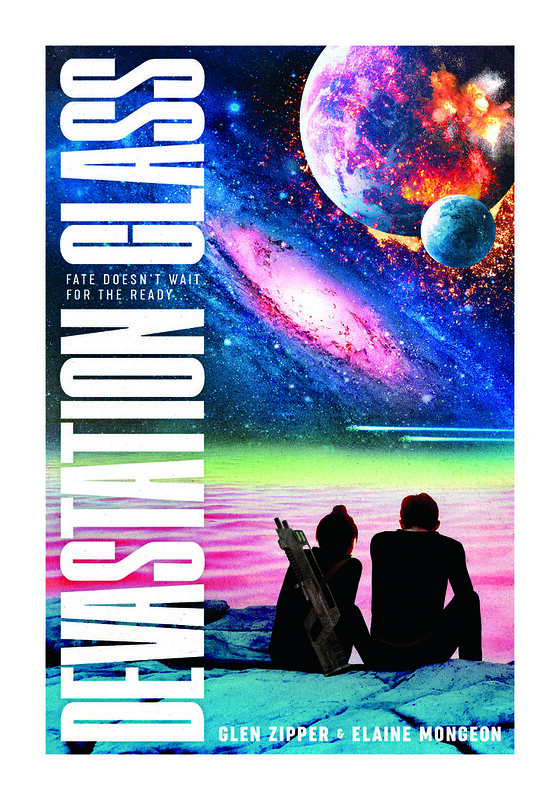 Doing the right thing isn’t always easy, and a lot of the time, it’s easier just to do nothing. But when you decide to make a stand, are you willing to risk everything, even your life, for the cause? Authors Glen Zipper and Elaine Mongeon explore this idea of self-sacrifice for the greater good in their new novel, Devastation Class.

The creative process, whatever form of expression it may take, can sometimes feel like it requires the deepest of Faustian bargains. Once you’re into it, you get to experience one of the most freeing, joyous, and exhilarating things life has to offer, but in order to get it you have to give enough of yourself to break through a six-foot thick brick wall and then climb Mount Everest. Barefoot. While juggling ferrets. And not nice ferrets. Surly ones.*

Everest (and the bare feet and the surly ferrets) are the metaphor for all those things big and small that stand in the way of making the commitment, day in and day out, to pulling that idea from your soul and bringing it into reality. The boss who says, “Umm, yeah… I’m gonna need you to come on in on Saturday.” Waiting for the inevitable fight when your partner says nothing is wrong, but one-hundred percent something is very wrong and seventy-five percent you’re going to be in a lot of trouble for it. The seemingly endless stream of bad news about the state of the world flooding into your eyeballs from social media (2020 please end now – thanks! Signed, Everyone). Or, most of all, the times where every one of your creative instincts seems wrong or just plain stupid.

So how do you do it? Where can you accumulate enough speed and momentum to topple that wall, and where do you find the stamina to climb Everest, never stopping until you reach its pinnacle? For us, it’s all about that big idea. An idea that haunts us like a ghost if we dare entertain the thought of letting it be forgotten. An idea that operates like a rocket booster with an inexhaustible source of creative fuel. And an idea that helps us ask questions that deserve answers, even if we ultimately don’t find all (or any) of them.

With Devastation Class that big idea was about being out of control, or, more specifically, how young women and men have to navigate a world with huge, increasingly existential stakes while older generations continually marginalize them or otherwise try to mute their voices.  The feeling of not being in control of your own destiny is, of course, familiar to any teenager, but the implications of their not being in control of their destinies are becoming exponentially more dire with each turn of the calendar page.

Right now, today, those in power are making decisions that will affect generations to come. The pandemic. Climate change. Racial equality. Social justice. Why and how does it make sense that older generations, the ones with all the silver at their temples, get to make decisions about such critical issues that they are really just the temporary caretakers of? It is the generations standing behind them that are going to inherit and live with the consequences of these decisions. So shouldn’t Generation Z and soon Generation Alpha have a voice in where we are going and how we get there? And if their voice is not heard, what should they do to make sure that it is heard – even if that means challenging a norm, breaking a rule, or perhaps even breaking a law? When does the means justify the ends and when does it not?

For us, one of our first memories of storytelling that asked some of these questions was the 1981 film Taps directed by Harold Becker – which also happens to be memorable for boasting a cast of then little-known young actors, such as Tom Cruise, Sean Penn, Timothy Hutton, and Giancarlo Esposito – all of whom would go on to enjoy much success. Taps, like Devastation Class, centers on a group of military cadets, but rather than being confronted with the life and death stakes of an alien invasion, they are confronted with the end of an institution that they love and believe in – namely a more than century-old military academy that represents an ideal that is inextricable from their identities. Instead of accepting the demise of the institution as well as the ideals it embodies to make way for the empty fate of yet another row of unnecessary condominiums, the cadets seize the campus, lock out the construction crews, and eventually have to fight the actual military to defend their position.

If you haven’t seen Taps you should, so we’ll avoid wading into spoiler territory, but suffice it to say you will absolutely question whether what the cadets were trying to protect justified the extraordinary means they took to protect it. If they would have done nothing, if they would have just let it go, what would have happened? Sure, they may have felt disloyal to an ideal, and they might have felt shame for not trying to protect that ideal, but would life have gone on without any horrible practical consequence? Our guess is your answer will be “It probably would have.”

The question we wanted to ask with Devastation Class was what happens when you reach the same crossroads as did the cadets in Taps, but, rather than it being a crossroads of the murky abstraction of loyalty to an ideal, it is a crossroads of true life and death? Even more specifically, what happens when you make a life-and-death choice you believe in your heart and gut is right, but making that choice also requires you to violate the most fundamental rules you are expected to obey?

The main characters of Devastation Class, JD Marshall and Vivien Nixon, and their cadet comrades are faced with exactly this sort of situation when an alien invasion force, the Kastazi, threatens to destroy them and annihilate human civilization itself. If they do nothing, the cadets are almost positive they and everyone they love will perish. However, if they do take action there is still no guarantee they’ll survive, and, even if they do, they will instantly and forever become criminals and pariahs.

How does someone make an impossible choice to sacrifice their future like that? Even if they feel like they have to make that choice, how do they overcome their fears and their learned, habituated instinct to “obey” those in power and their rules? And, most importantly, how do they deal with the domino effect of all the consequences of their choice – many of which they could never possibly have seen coming?

Today all you have to do is walk out your door to see choices like this being made in the real world. Whether it’s protesting for racial and social justice, or in any way espousing a just cause or view that is abhorrent to those in power, young women and men are making choices at their own risk and peril to do what they know in their hearts and guts is right. The critical question eventually becomes what do they do when the result they are trying to achieve requires taking action that could truly sacrifice their own well-being and future for the greater good of those who will continue to suffer if they don’t take action?

Devastation Class, wrapped in the allegory of a mind-bendy YA space opera adventure, tries to ask some of these questions. While we don’t presume to offer any definitive answers other than perhaps some insight into our own POVs, the big idea wasn’t about finding any one answer. It was about asking the right questions and using the stakes imbued within those questions to drive our creative process.

And, let’s be honest… Big idea aside, our creative process was also motivated by wanting to blow stuff up in space. Like a lot of stuff. So we had that going for us. Which was nice.

* No ferrets were harmed in the writing of this Big Idea.

← Here’s Me and Zachary Quinto Interviewing Each Other About “Murder By Other Means”
Dude, That’s My Jam: A Review of Four Fancy Jams →

1 Comments on “The Big Idea: Elaine Mongeon and Glen Zipper”