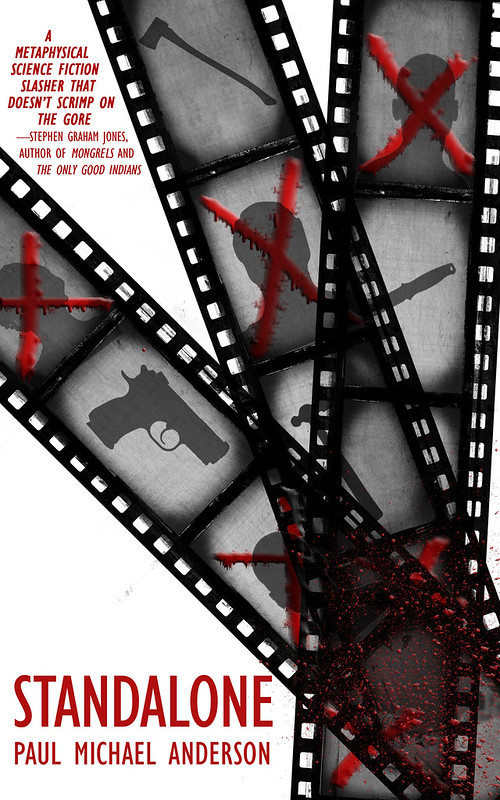 Assassination isn’t always personal, sometimes it’s just business. And sometimes the people carrying out the business are from a different dimension and are dressed like nightmarish monsters. It’s all part of the gig in author Paul Michael Anderson’s newest sci-fi/horror novel, Standalone.

At the kick-off of what I’ve been calling The Standalone Promo Tour™ to my wife, writer Adam Cesare featured my new book on his Project: Black T-Shirt YouTube channel. Describing my slasher novella, he said, “Now, it’s being marketed as a horror book, it’s being marketed to horror people, but I would call this, without a doubt, a science fiction book.”

You know that meme where, in one frame, the stick figure holds up a finger as if to go, “hey, wait a minute,” but in the next frame, the finger wilts as the person reconsiders saying anything? That was me.  I couldn’t fault Adam for saying that about Standalone in a video where he gives a glowing recommendation for it. Adam, who’s written a slasher or two of his own (including the just-released Clown in the Cornfield from Harper Teen, which you should go pick up post-haste, and am I allowed to recommend someone else’s book while trying to sell my own? I hope so!), knows the genre, and Standalone…yeah, it has more than slight science-fiction undertones.

See, Standalone is about a group of people who, once a month, jump from the Center of the Multiverse into various versions of Earth and, disguised as that location’s urban legend (think, like, Jason Voorhees from Friday the 13th), kill preselected groups of people with the purpose of maintaining the energy balance of all existence. However, something is now stalking them and it’s up to the sole survivor to figure out a solution before the Multiverse winks out.

So, yes, it’s not a straight forward horror story. It’s also not a stereotypical science fiction story, either.  It’s a weird blend.

But, thinking it over, I’m not particularly surprised by this, for two reasons. One, I had to think of some way of making mass murderers both evil and convincingly empathetic, as well as doing the same with the people hunting the murderers, and the only way my head could think to do that was through using blue-collar guys jumping multiple-dimensions, like Sliders and Ghostbusters by way of Scream.

And, two, my head worked the problem out that way because of Harlan Ellison and Jack Ketchum.

I have on the top shelf of one of my book cases a memorial, for lack of a better term, to both writers, collecting their hardcovers and paperbacks in one place, separate from my otherwise anally-organized books (genre, then last name, then chronological, and, yes, it’s exhausting). These two writers shaped the kind of writer I eventually became more than any other—more than Stephen King or William Gibson or Shirley Jackson or Octavia Butler.

Jack Ketchum, the writer of such novels as Off Season, The Girl Next Door, Red, and (with director Lucky McKee) The Secret Life of Souls, was known for writing brutal, heart-wrenching horror of unflinching violence but also unwavering pathos. His work hurt the mind and the heart. And I don’t need to, on this website, go over Harlan Ellison’s accolades, do I? The infamous grump was at the forefront of science fiction’s new wave and, even afterwards, remained, reluctantly, its squawking Jiminy Cricket.

Both writers affected me deeply, shaping not just the way a story could be told, but the motivations of the people within that story, and how hard the emotional truth can be not just to get to, but to put into words. It’s not unkind to say that these writers were polar opposites of each other in terms of content, mode, and execution. Ketchum, predominately a novelist, could never have come up with something as fantastic as “The Man Who Rowed Christopher Columbus Ashore” or “Shatterday”—but Ellison, who preferred to work in the short form, could never have written the heart-wrenching gray areas of Red or I’m Not Sam.

It’s in the middle of both writers and their respective oeuvre that I find myself more and more often, recently, none more so than with Standalone, which can be taken as something akin to a marriage between the two writers. I sometimes wish I was more out-and-out weird like, Harlan or Jeff VanderMeer or Kelly Link, or more hardboiled like Jack or Eddie Little or Jim Thompson, but the stories I tend to like to tell—and the stories that tend to resonate with readers—are those that shimmy between the two extremes.  It’s a tight-rope act, honestly. Will SF fans turn out for a horror story, and vice versa?  It’s cliché to say people should read widely, but the fact that we still have to tell others to do this lets you know how often people actually listen to that advice.

Standalone at the end of the day is about a single person who left behind their life and chose to commit extreme violence in a variety of realities, all in the hopes that it would somehow protect the people they left behind. Boiling away all the extra stuff—the multitude of genres, the punchy verbs I write to try and get your attention—Standalone is about that and nothing more.

Hopefully, Harlan and Jack would’ve been happy with that.