When I was a kid, I went to Camp Willson, a YMCA summer camp in Bellefontaine, Ohio. I went for nine years. The first time I went, I was seven, and the last time I went, I was sixteen, and I was a counselor in training that time around rather than a camper. I had meant to be a junior counselor the next year, and become one of the legendary ten year campers, but I never did it, because I was more interested in being a camper and having fun than actually having responsibility.

Camp Willson was one of the best things in my life. I’m so glad my parents sent me to camp (even if the first year or two I got homesick and kind of maybe cried a smidge). I have always remembered my camp days fondly, and part of me always wished I could go back. Well, little did I know what awaited me at their Woman’s Weekend!

Once the summer camp season is over, Camp Willson offers a couple different programs. Usually they partner with schools in the area for field trips and whatnot, but they also have weekend camps for kids like spring, fall, and winter camp (which I also used to go to), and then for adults they have Woman’s Weekend twice a year and Men’s Weekend, as well. And it was exactly what I had been hoping for: Summer camp for adults!

My mom and I signed up and went this past weekend to Camp Willson, where we had a blast. But, how do you make something like summer camp safe during a pandemic? I’m here to say, Camp Willson did a great job of being safe and sanitary, by giving each party (for example, my mom and I) our own cabin. Cabins normally sleep fourteen, so to have one or two people staying in a whole cabin by themselves was interesting, but definitely a necessary precaution. The cabins had attached bathrooms, as well, so there was no worry over germy communal bathrooms.

Also, everyone sat six feet apart at the campfire and at meals, and instead of their usual serve-yourself style, gloved and masked staff served the food. Not to mention there were only a dozen women including my mom and I, and we rarely interacted with each other outside of the socially distanced meals, so contact was certainly limited.

My mom and I arrived Friday night, but the only thing that really happened that evening was the welcoming campfire. Oh my gosh there was the most amazing cheeseball, it was like strawberries and cream cheese and it was bright pink, it was really good. Other than that there nothing worth noting for that night, so I’ll just skip straight to Saturday. 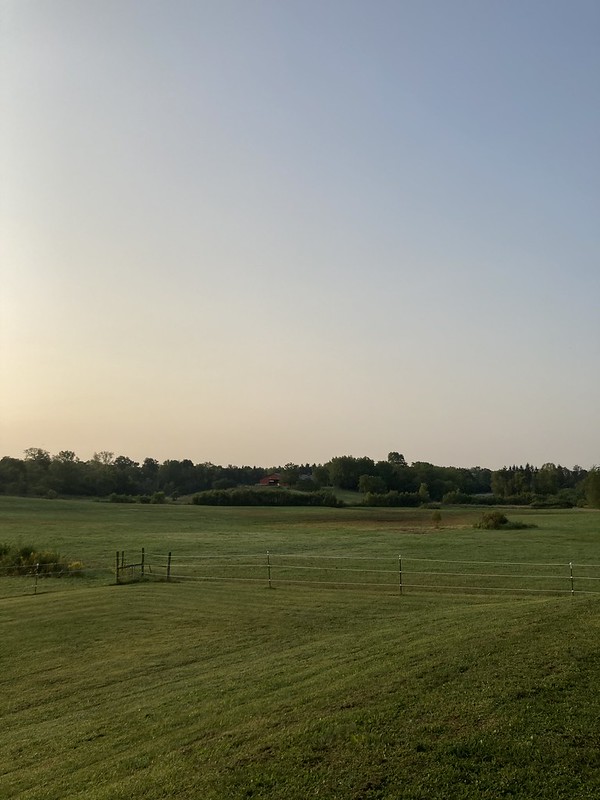 We woke up at seven and went to breakfast. All the meals were outdoors (probably also a safety precaution), and watching the sun rise over the horse pasture in the crisp morning air while eating a fan flippin’ tastic waffle was definitely the right way to start off our activity packed day (man, those waffles… something about them was so good, they had some kind of crispy sugar crust on the outside).

First up, we did archery. It was just my mom and I and one other woman, and we all stood about ten feet apart, and the staff wiped down our bows with sanitizer repeatedly. My mom did a great job! I didn’t shoot quite as well, but I think we all could’ve guessed my mom is kind of a bad ass. 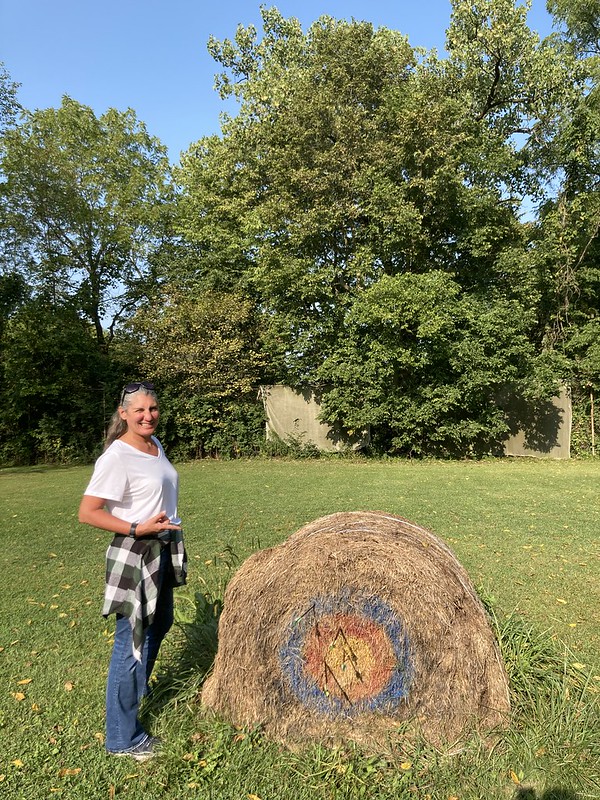 We shot for about forty-five minutes before we went to our next activity, the Giant Swing. This is my personal favorite thing at Camp Willson, and something I haven’t done for roughly five years, since I was a CIT. My excitement was immense. The Giant Swing consists of three tall wooden poles, and you’re in a harness, then you get pulled to the top of one pole, about thirty-five feet in the air, and are dropped, and you swing in between the other two poles. It’s really hard to explain so I’ve provided a video of an attraction that is very similar:

This one is at an amusement park in Canada and is a LOT taller than the one at camp, but that’s basically the gist of it is you’re pulled to a high height and then dropped and swing around for a bit. It’s insanely fun and feels like flying, you feel totally weightless and free (maybe not exactly free because of the harness) and it’s exhilarating! Here’s my mom and me swingin’ away: 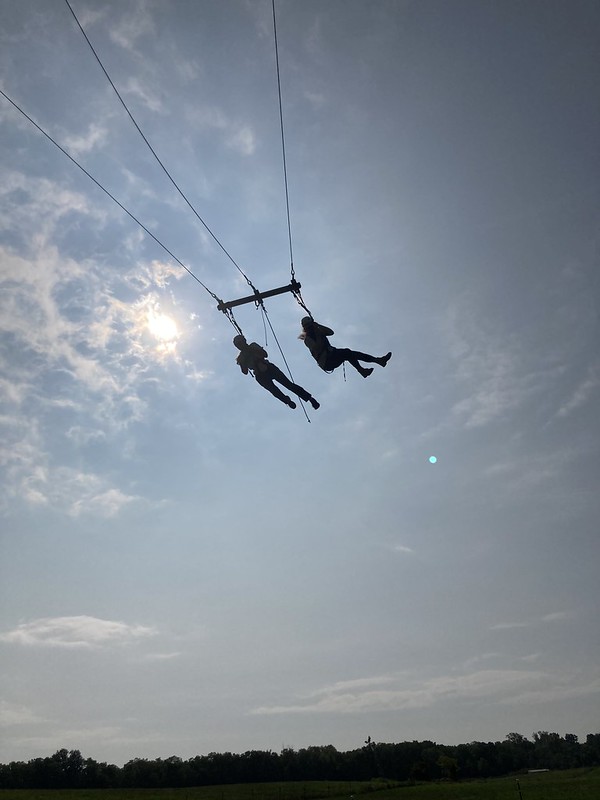 After the high ropes escapade, we had some lunch, and then hit the lake! My mom kayaked, and while I do really enjoy kayaking I decided to paddleboard instead, which made for a much more interesting (and carefully balanced) expedition. I didn’t fall off though, which actually surprised me, I did much better than I thought I would! It was super fun, and it’s a decently large lake. I didn’t get any pictures because I didn’t want to risk dropping my phone in the water, but it’s a very pretty lake with woods all around it.

Once we had paddled around a bit, we went horseback riding. Granted, it was only a trail ride, but it was nice to explore some of the paths through the woods and be in a saddle again; horseback riding is something I did more often in my youth that I miss a lot. 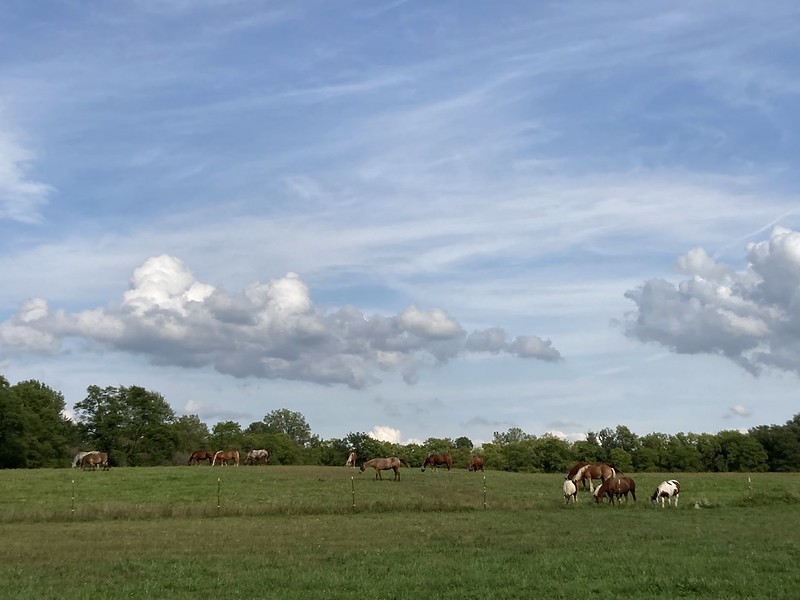 These activities I mentioned weren’t our only options, by the way, the camp had a lot more to offer! There was yoga, wine glass painting, making your own bath bombs, a climbing wall, canoeing (and normally they offer massages and facials but due to COVID this year they only had manicures and pedicures, but those have like a 25 dollar extra fee). My mom and I had planned to go to a Sip and Paint (mocktails, not cocktails), but I ended up falling asleep super early in the evening and sleeping until the next morning.

Sunday morning, it was pouring outside, so my mom and I just sat on the cabin porch and read our books and drank the coffee the staff had brought to our cabin. The rain stopped just in time for brunch, where we had a really good quiche and some seriously delicious scones. One was chocolate strawberry and one was pumpkin spice, so my mom and I each picked one and then split with each other, because how could you not try both?! After brunch, we packed up and headed out for the little over an hour drive back home.

It was a seriously fun weekend, and I’m so glad I was able to do these awesome activities with my mom. There’s no one I would’ve rather gone with, and I hope we get to go again soon. And I’m so happy that places like Camp Willson exist. It gave me amazing memories as a child that will last for the rest of my life; I never expected it could give me new fantastic memories as an adult, too. 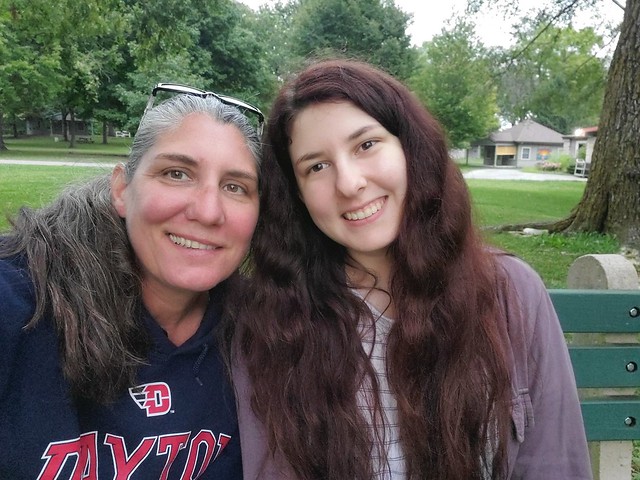