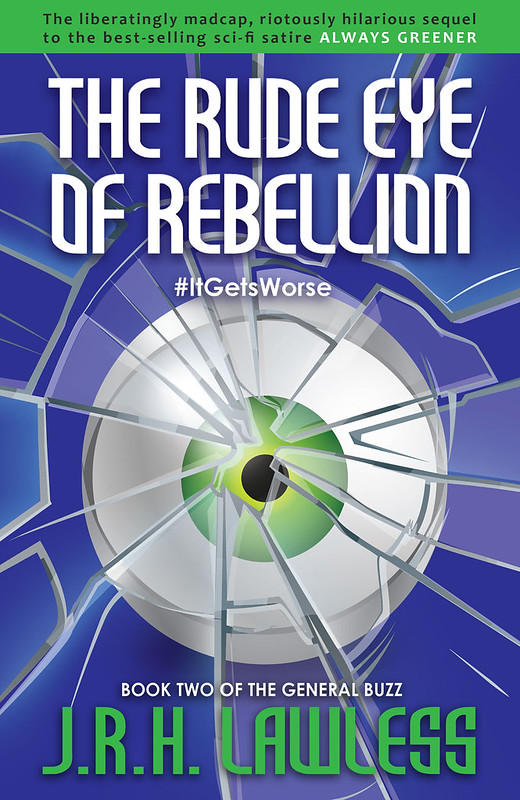 Everybody come on down to The Rude Eye of Rebellion! In today’s prize package we have: dark comedy, torture based reality entertainment, and a slow-brewing Marxist revolution! Now please put your hands together for your host, J.R.H. Lawless!

If The Rude Eye of Rebellion, the second book in the General Buzz series, could be summed up in a Gif, it would probably be one of those Shutterstock “cute kitten” pictures—maybe even one of the especially nightmarish ones where the cat looks like it’s wearing a suit—with the words HOW CAN I HAZ REVOLUTION?

Then again, the same could be said about a lot of things these days, starting with the year we’re all enduring.

Rude Eye is a dark humor novel all about The Grass is Greener, a reality game show where the corporate world-state of the 2070s exploits its worst victims, the ones with the most ridiculous, nonsensical jobs and lives, to make everyone else feel better about their own lot. And perhaps worst of all, the contestants are willing participants, since they’re competing for recognition as the world’s biggest victim, and the life of luxury alongside the corporate elite that goes along with it.

The “opium of the people” has never been so good, since now it’s composed of the people themselves, like some sort of weird hybrid between A Contribution to the Critique of Hegel’s Philosophy of Right, and Soylent Green.

But all the humor stirred into the brew, all the absurd situations, the wordplay, the puns, and the quirky etymology footnotes are only the teaspoon of sugar added by a particularly messed-up Mary Poppins to make the medicine go down. And that medicine is the real Big Idea in Rude Eye: Marxist revolutionary theory applied to a late 21st century corporate world-state.

I work as a lawyer when I’m not mashing my forehead against a mechanical keyboard (although, admittedly, that’s also a large part of being a lawyer), but my original training led to me picking up two Master’s degrees in political science, for some reason. And among the many vital lessons I learned even though they weren’t necessarily the ones the schools were trying to teach, I’ll always remember the class where my French “general culture” teacher started waxing lyrical about “entrism”, the Leninist and Trotskyist notion of having agents of marginal movements integrate more mainstream and influential organizations in order to reach a position where they can effect change from the inside.

That moment planted the seed for what would become the General Buzz series, and especially The Rude Eye of Rebellion, since the book explores the extent and limits of the main character’s power to use a position of relative influence within the corporate structure to uphold his principles, help right wrongs, and make the world a better place.

He meets a small host of characters along the way, and some of them are relatively thinly veiled opportunities to explore and question the Marxist revolutionary themes within the world of Rude Eye at greater depth. Whether it’s through fireside conversations about bases and superstructures in an isolated farm commune, or in the novel’s climax—which involves a covert mission to seize and free the new means of production of the corporate era, entertainment content streaming—the novel is all about applying the ever-timely notions and categories of Marxist revolutionary thought to the world we’re careening towards, faster and faster every day.

As if all of that wasn’t tongue-in-cheek enough, I even have the main character take a forced trip to a literal corporate era superstructure—”Paradise Mars”, the extraterritorial haven built in the hollowed-out husk of Phobos, where gravity is a commodity and the corporate elite can do whatever the hell they like, which most definitely includes abducting and brainwashing important corporate assets who may have started showing disturbing signs of thinking for themselves.

Independently of whether the main character succeeds or not—you may have guessed from the overall dark humor tone of the book that things generally aren’t going to end with sunshine and roses—the main thing Rude Eye highlights is that revolution is a process.

The seeds planted by any individual’s actions might only bloom years or decades later, in the most unexpected of ways, but always stretching towards the same goal—offering a credible, Direct Democratic alternative to the inevitable confrontation between globalized corporate rule and a return to fascist, nationalistic authoritarianism.

And, at this point, I’m obviously not just talking about the world of the General Buzz series anymore.

← So I Was Going to Post This Picture of Spice Stretching Last Night, But I Guess I Got Distracted By, You Know, STUFF, So Here It Is This Morning, Hello
The Reagan Test and Donald Trump →