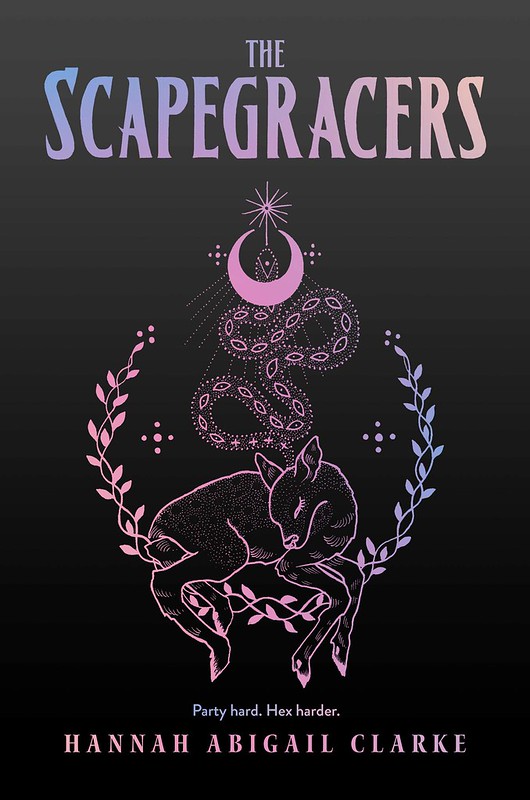 Hey, remember all those teen movies with the girl cliques? So does Hannah Abigail Clarke. Their new novel The Scapegracers is one of the things that happened when these films and the author collided.

I wrote The Scapegracers when I was 19 because I was lonely and pissed. Let me elaborate.

At 19, I was rageful. Teenage anger is a well-documented phenomenon, as the rapid onset of political, psychological, and physical changes makes for a trifecta of awful brain space. In my specific circumstance, my rage was augmented by a sudden awareness of the fact that I felt lonely for a reason. I was a dubiously gendered lesbian in the rural Midwest. Among all the other Things we could remark upon here, the most relevant is that the lack of likeness in media abraded me constantly. Three years ago, there was next to nothing on genre fiction shelves with lesbian protagonists, much less gender nonconforming ones. Still ain’t much. So! Rageful teen Clarke ate a lot of media that wasn’t intended for them.

I’m talking here about kitschy girl clique movies from the late eighties through the early aughts. Think Mean Girls and Heathers and Jawbreaker and The Craft. All of the above are absolute camp fests with intense focus on homosocial relationships between teenage girls. These movies all seem to feature eccentrically dressed girls with substantial social power who have bizarre, stylized dialogue and absolutely despise each other by the movie’s end. The girl clique falls apart, often with great (comic?) violence. Lesbianism hangs over the narratives like a thorny pink-and-orange ghost.

In Jawbreaker, the girl clique accidentally murders one of their own, but because a mousy little lesbian was obsessed with the murdered girl, they suddenly had a replacement that spared them jail time. In Mean Girls, members of a girl clique are psychologically tortured because one of them accused a non-lesbian of lesbianism and that insult warranted an elaborate revenge plot. I’ve said it before, but on vibes alone, Nancy from The Craft feels incredibly queer. Hollywood loves a crazy obsessive lesbian. Heathers is aggressively straight, we’ll forgive it that—though I could gesture at the atrocious remake’s insistence that the central clique is queer.

My point is this: a whole slew of fantastic movies, I’d argue some of the most fun movies about multiple girls and their relationships to one another, are drenched in some drab and ugly assumptions about girlhood and lesbianism. Even so! Man, do I love the beginning of these movies where a bunch of high femmes are jackasses together.

So, I’m not a girl. We don’t need to get into the specifics of lesbian gender viper pits, but it goes to say that I’m not much like the girls in a girl clique film. YA has plenty of girls who will tell you endlessly that they also aren’t like girls in a girl clique film. I’m not what they mean by that. The Not Like Other Girls trope allows for a character to disavow femininity on the grounds that femininity is shallow/opulent/unintelligent/garish/promiscuous/Bad, but the trope is very careful about binding its character enough to femininity that nobody mistakes them for a butch dyke. There are bad ways to be Not Like Other Girls, and the YA that fell into my hands when I was young summarily avoided them.

Again: I was lonely and pissed.

The Scapegracers is a book that weds a lot of these consternations of mine into a single narrative—a girl too far away from femininity to be Not Like Other Girls appropriately, befriends girls so saturated with femininity that they become the Other Girls themselves; their friendship does not unravel because of cattiness or bitchiness or violence or what have you, they are ridiculous and campy and ill behaved, and wrathful, and extremely gay. They navigate a magic system that I built around our dirtbag protagonist, Sideways Pike, and the trauma that’s been mapped onto her body, both interpersonally and structurally. They mercilessly hex those who transgress them. They party harder than they probably should. They hang out. They yearn together.

I’m not 19 anymore. Time happens, I guess. Even so, The Scapegracers exists to acknowledge not just the queerness of its characters, but the pain and joy they feel as legitimate, immediate, and tangible. It’s a sketchy, neon triage tent for the pocket dimension version of Clarke who will always be 19 in farm country, Ohio. I know that there are a plethora of other living beings adjacent to pocket dimension Clarke who might need this book, either because they’re currently rageful queer teenagers, or because they’ve got pocket dimension egos of their own to affirm and look after. I mean for it to be the book object equivalent of a novelty match book. I hope that whatever little fires it strikes can warm your hands awhile.

← The Reagan Test and Donald Trump
Put a Ring On It →