The Big Idea: R. B. Lemberg 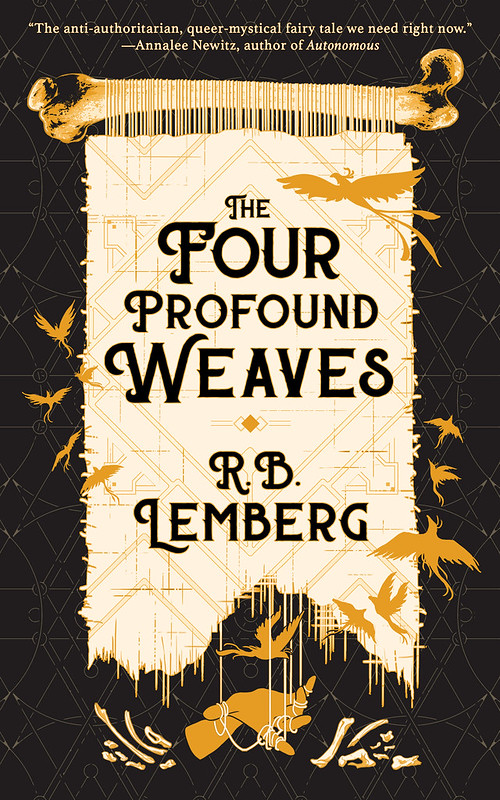 Who needs to be the Chosen One at the age of thirteen, or to save the world at sixteen? With The Four Profound Weaves, author R. B. Lemberg takes us on a fantastical journey with an older character, one whose story has just begun.

I’ve been writing in Birdverse, my LGBTQIA+ centered fantasy world, for about a decade. For a while, I primarily published poetry. Then I began writing short stories that revealed, from different angles, a complex and diverse fantasy world in which queer and trans people take central stage – in the world’s mythologies, histories, politics, and in my storytelling. One of these short stories was “Grandmother-nai-Leylit’s Cloth of Winds,” a novelette published in Beneath Ceaseless Skies, which became a Nebula finalist in 2016.

The story, told from a perspective of a young, cisgender queer woman called Aviya, looked at what happens when one’s family members don’t fit into the mold prescribed by one’s culture. I always knew that there is a big story – a much bigger story – to be told about Aviya’s transgender grandparent, and in 2017, I finally began working on the book which is my Birdverse debut, the novella The Four Profound Weaves.

My Big Idea for this piece has always been this: what if older transgender people get to tell their own stories, get to go on a quest, on a grand and tragic and hopeful adventure in which they can finally, in their sixties, truly begin their stories?

This shouldn’t be, perhaps, such a Big idea, but older people – especially older women and older queer people — are underrepresented in SFF unless they are mentors. And of course, there are barely any older trans people in SFF, even as mentors. Older mentors are often in the stories only briefly – they endow the hero with cool magical skills or the Really Big Sword, and then the mentors go on to be tragically killed, so that they can continue to inspire the much younger hero from a safe distance of being dead. I always wanted to write a “mentor’s own adventure” type of story, in which these brilliant mentors get to be in focus.

I was curious about the nameless man, the trans protagonist of my book. He transitioned in his sixties, after forty years of agonizing and closeted life. I wanted to know what he would do after he finally transitioned. Well, almost immediately he made a friend, another trans person, Uiziya, who became the other protagonist of The Four Profound Weaves. Together, they embarked on a mystical quest to find Uiziya’s exiled aunt Benesret, a master weaver who knows everything about death. Uiziya and the nameless man need to learn to weave from death itself to defeat an evil ruler who’d once, a very long time ago, imprisoned and killed the nameless man’s lover.

I often write people with histories of trauma. Sometimes, exploring my characters’ traumas helps me think about my life, and sometimes my own CPTSD interferes with my process; I need to stop and attend to my feelings and memories before I can proceed writing my characters’ intense and emotional worlds. It is a very intimate process. The Four Profound Weaves took shape after my father of blessed memory passed away in a different country, before I could get to see him for one last time. I was en route when he passed.

For months after, I thought I would never write again. The grief was so big it was like the whole world was blanketed in snow, and I could not see or hear anything else. Then, slowly, writing resurfaced, and it was time to tell this story. I wrote the initial draft quickly, followed by many revision rounds. After the book sold to Tachyon, the fine folks there helped me through two big rounds of revision. I love revising, especially with such excellent editors.

I am deeply grateful to all my readers, editors, and allies for believing in this book. It’s amazing to see The Four Profound Weaves out in the world. I hope many more readers will discover it, engage with its core ideas, find meaning and wonder and and solace in this story. Some of my readers described reading this book as a religious experience. I cherish that.

← Ask Me a Question!
The State of Masking in Trump Country: An Anecdotal Report →