The State of Masking in Trump Country: An Anecdotal Report 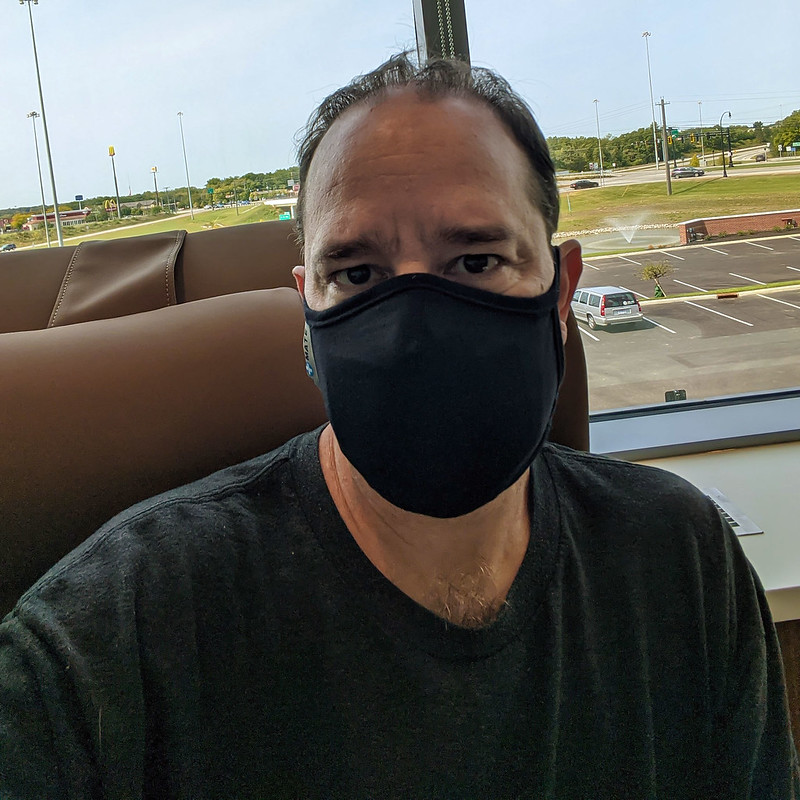 I had a doctor’s appointment today (spoiler: I’m fine, everything’s fine), and I was excited about it because I haven’t been out of the house for a while and also I bought some new masks and I was excited to try one of them out. The new masks are triple layer (one of the layers being an N95 insert), have an elastic band around the back of the head so they don’t fall off, and fit snugly around the chin for extra cover-your-faceness. Welcome to 2020, masks are so in this year.

Well, sort of. As most of you know, I live in a county that went 78% for Trump in 2016 and is likely to pull similar numbers this year, and out in Trump Country, masks are the sign of a multinational Soros-funded conspiracy to compromise our precious bodily fluids, or whatever. So the question is: What is the status of mask wearing in rural-ish America, or at least the part of it where I live and move around in?

The answer: Spotty! At the doctor’s office, of course, it was full compliance; all the receptionists, nurses and doctors wore masks (mostly basic disposable surgical masks) and wore them the entire time they were working on me. I also wore mine the entire time, as I was not there for anything that involved anyone needing me to breathe on them, or them looking down my throat. I suspect it would be a bad time for anyone trying to argue in a medical office that masks weren’t needed or required.

Then I went to Kroger, to pick up some things, and the mask-wearing percentage dropped significantly. Who were wearing masks? Well, it wasn’t middle-aged-and-younger dudes, I can tell you that much; not counting the dudes working, I was the only man my age or younger wearing a mask. Older men (and older people in general) were wearing masks, probably because regardless of their political positions it’s been drilled into their heads by now that older people are more susceptible to the ravages of COVID-19 than younger people. That said, of the younger men I saw not wearing masks, a rather lot of them had, how best to put it, obvious co-morbidity factors. It probably wouldn’t be great for them if they got sick.

Anecdotally, this has been the way of it for a while now out here: If you’re a man visibly under the age of 60 (and here where I live, in a county that is 98.5% white, this means basically white men under the age of 60), you’re far more likely not to be wearing a mask out in public, and in the retail sphere, than you are to be wearing one. Now, note that Kroger and nearly all other retail establishments have signs at the entrances telling customers that masks are required; the dudes are ignoring them and the retail workers (all of whom are masked) are not stopping them, because we’ve all seen the videos of people completely losing their shit when asked to wear a mask, and retail doesn’t pay enough for that sort of nonsense. Over the age of 60, men wearing masks becomes more common, because they don’t want to die. In my experience the ratio of women of all ages wearing masks is the inverse of the men under 60; most women wear masks, but some don’t.

Mask wearing, at least as I see it here and in my own anecdotal experience, is very definitely coded by sex, and while I haven’t done any sort of serious study of it — I’m not out in front of Kroger, tallying up masks and not masks — it wouldn’t terribly surprise me if the correlation between who refuses to wear a mask and who is voting for Trump is very high. Likewise the correlation between the dudes not wearing a mask and their level of education (less than a quarter of the people who live in Darke county have a bachelor’s degree), which again correlates well with one of Trump’s most solid voting constituencies. Trump eschews the wearing of masks and has made wearing them both political and a referendum on masculinity, so it’s not entirely surprising if his supporters have followed suit.

Does this mean that I am getting terrible looks from dudes because I’m wearing a mask? Not at all; mostly everyone in Kroger and elsewhere is working on minding their own business. I do find anecdotally that dudes have far less of a problem with the “social distancing” aspect of things, which doesn’t surprise me all that much — Trump and his associated lackies have made much less of an issue of standing six feet apart — so it’s been relatively simple to keep a prudent distance from the maskless in any event. Most people here seem to have settled on the “If you want to wear a mask, wear one; if you don’t, dont,” level of things. Which, again, is against current retail regulations. But rules that aren’t enforced aren’t really rules, are they.

Important point: I’ve made the anecdotal connection between supporting Trump and not wearing a mask, but let me take a moment here to note that my anecdotal experience is anecdotal; I’ve literally not been more than 15 miles from my house in months. It’s entirely possible that dudes under 60 in deeply blue areas are just as useless about wearing masks as the dudes under 60 here in my deeply red area. In which case, it’s not about rampaging Trumpism, it’s about dudes under 60 generally being shit when it comes to caring about other people. Dipshit masculinity is a hell of a drug, y’all. Those of you elsewhere, you can tell me your own anecdotal experience in the comments, if you like.

I’m not thrilled by people who don’t wear masks; at this point, however, I’ve sort of wearily accepted that some people are just never gonna, and since the Governor of Ohio has not vested in me the power to be Mask Warden, what I’m going to do is a) stay home most of the time, b) mask myself up when I do go out, and c) keep out of the way of the maskless when I can, and I mostly can. This is low-density living and people are mostly just fine giving everyone else space. Hopefully that will be enough for now.

135 Comments on “The State of Masking in Trump Country: An Anecdotal Report”