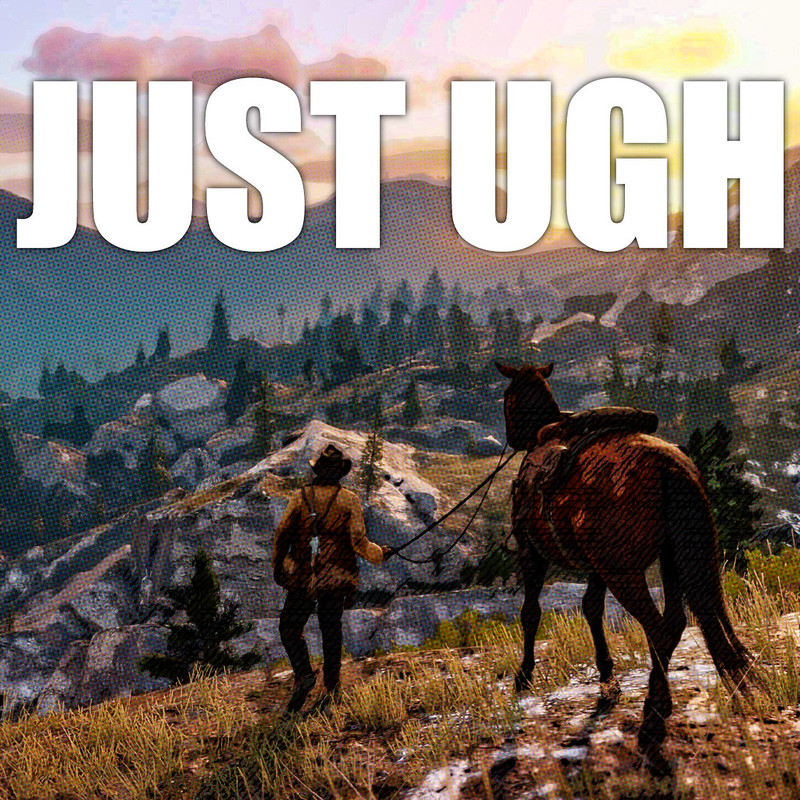 I’ve always loved video games. My whole life, I’ve been enamored with the gaming world, from the PS2 to the Nintendo Switch, from arcade machines at the movie theater to the PC (which is obviously the best but we’ll save that for another post). But there is one thing I’ve been noticing recently that I never really had an issue with when I was younger. I’m not sure if it’s just me or if it’s like, a newer game problem, but: Everything is too difficult.

I know, I sound like a big crybaby who isn’t very good at video games. And you’re right, I am exactly that. But I honestly believe that combat in recent video games is too difficult! I tried to play Fallout 4 on the PS4 this year and no joke I got my shit rocked by glowing ghouls and synths alike. I’m less than halfway through the game because I simply can’t complete the missions I’m supposed to, I just get sick of trying after like my seventh attempt.

I’m mentioning all this because I was planning to write a post this week over Red Dead Redemption 2. All I had to do was complete the last mission and then I was going to write up my post, easy peasy. However, when I sat down yesterday to finish the game, I found that I was getting my ass handed to me on a silver platter by some cowboy NPCs. So instead of making that post, I’m making this one to complain about how tough this shit can be.

Most of my life, I’ve played games where you can adjust the difficulty setting. Even some newer games, like Spider-Man for the PS4, have choices between easier combat for players who are more focused on the story, and harder combat for those who like a challenge. Some games like this will make fun of you for choosing the easy route, but I’m not about to set myself up for failure by picking something harder than I can handle.

This difficulty setting from Wolfenstein is especially funny to me because when I was a kid I would play games with my dad on his computer. I would sit in his lap and he’d let me be the guns and he’d do the movement, and we’d kick the shit out of aliens in Half-Life.

When it comes to games being so difficult you can’t even play them, I think the first one that comes to anyone’s mind is Dark Souls. Absolutely bonkers. Rage quit every time. Listen, I bought the remastered version on the Switch earlier this year and I’m quite literally not even past the second boss. This game gets a pass in my mind though because it’s specifically meant to be hard as fuck. Or is that false, and I just think that because I’ve heard my whole life that it’s ridiculously hard?

Anyways, maybe I’m just worse at video games than I previously thought. Maybe I just don’t have that pro-gamer gene in me. All I know is, I’ve abandoned a lot of games, games that I really liked and enjoyed and thought were super cool, just because I simply can’t continue. It’s just too hard.

This is one of the interesting things about a game like Skyrim. You can go around and explore and find things to fight in the woods. However, if you accidentally come across a level 90 dragon priest up in the mountains, you can RUN AWAY. You don’t have to fight! You can outrun pretty much any enemy. So yes, the combat can be hard if you stumble upon an NPC that’s a way higher level than you, but you can just as easily avoid said conflicts or even run away from them. You should always have a “chicken out” option.

There are just so many games I’ve stopped playing either halfway through, or at the final boss fight. Another good example is Breath of the Wild. As much as I adore practically everything about it, the Divine Beasts are ridiculously hard. I started with the elephant and the camel, and I had to look up walkthroughs for both. I would have never gotten them on my own, and they’re supposed to be the easier two of the four!

I’m really starting to think this might just be a me problem though, because all of my friends that play the same games seem to have no trouble with them. Especially the handful of my friends that are really good at Dark Souls. Maybe I’m just the weak link in my gamer group, y’know?

(Unrelated to combat being too difficult, but can we talk about how RIDICULOUSLY DIFFICULT Rocket League is?! GOD that shit is so annoying.)

Okay, back to my original point. It’s especially frustrating to not be able to beat a game when you spend sixty bucks on it. Like, at that point I’m just mad at myself that not only am I not good enough to win, but I spent money on this unbeatable game!

So, yeah. Just wanted to have a quick vent about that and explain why you all shan’t be receiving a Red Dead Redemption 2 post (yet). I’m off to give it another whirl. Yee-haw!

← In Which I Offer An Opinion So Contentious It May Rock the Very Fabric of Our Society
And Now, Something Relaxing →