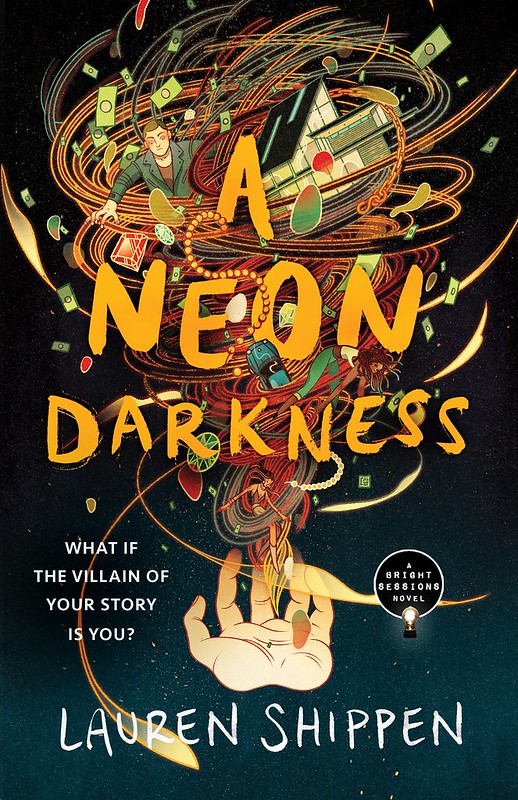 Do you love a good villain story? Who doesn’t enjoy a nice anti-hero now and again, right? Take a trip to the dark side with author Lauren Shippen’s newest release, A Neon Darkness, and see just how bad a good person can be.

I never thought I would write a villain story.

It isn’t that I don’t find villains compelling, or enjoy it when they monologue about their sinister plans—there are hundreds of engrossing, thoughtful stories about villains, anti-heroes, and those who never quite settle on either side. I liked these stories in the way that I like popcorn—I have a good time eating it and then the moment I’m done, I don’t think about popcorn until the next time it’s put in front of me. I certainly never expected to be spending all of my time out in cornfields.

This metaphor is falling apart—the point is this: I’ve never mooned over the bad boy. It’s not that I want simple and perfect heroes either.  I like nuance, I like complicated characters, I like hanging in the moral grey area.  But mustache-twirling, leather jacket wearing, said-it-with-a-smirk-ing characters have never been the object of my affection. So imagine my surprise when I decided to write an entire book detailing the origin story of my own podcast’s antagonist, whom I had bestowed with the self-aware moniker of “Damien”.

When I introduced Damien in The Bright Sessions, he was meant to be a direct commentary on the slick bad boys that send fans into a tizzy despite the bottomless black void that sits where their heart should be. What is it that makes people go wild for characters who behave so badly?  How much are we willing to excuse when a villain is given a tragic backstory of their own?  How much pain is a person in pain allowed to inflict on others? I created Damien to poke at this archetype, to show that, yes, a person can be redeemed but only if they are active in their own redemption. It isn’t the hero’s job to save their villain.

But then something funny happened. The more I got to know Damien—in writing with him and working with my voice actor, Charlie Ian, who also voiced the audiobook for A Neon Darkness—the more I realized that, in Damien’s mind, he was the hero. When we meet him in The Bright Sessions, he’s in his late twenties, comfortable with his supernatural ability, and refusing to take responsibility for his actions.  He’s the villain in everyone’s story, but the hero of his own.

When I wrote A Neon Darkness, I wanted to flip this on its head.  Damien isn’t Damien yet—he’s still going by his given name, Robert. He’s eighteen and terrified of the power he has to make people do whatever he wants. It’s not that he doesn’t want to take responsibility, he doesn’t know how. Like a lot of young people arriving in a new city, with no idea what to do with his life, Robert makes mistake after mistake, but also falls in love with a place, with a group of people, and realizes that the thing he wants most is to keep them.

Robert’s intentions in A Neon Darkness aren’t to gain perfect control of his ability, or to get money or fame or power.  He isn’t trying to take over the world or build his perfect life.  He’s just trying to keep the family he’s built and will do anything to achieve it, even when it means hurting the people he loves most. And that was my Big Idea: do intentions matter when we do bad things? Can intention redeem our actions? How many chances do we give someone who behaves cruelly but doesn’t have cruel intentions?  Robert may be the protagonist of A Neon Darkness, but this time he isn’t the hero.

I fell for my own trap. In trying to create a straightforward commentary on inexplicably captivating villains, I got captivated.  I decided to put gourmet truffle salt on the popcorn.  But those little corn kernels still get stuck in your teeth. They cut your gums, pouring salt in the wound, but you keep going back for more. Now that I’ve written a villain story of my own, I don’t know that I have an answer for why I find them compelling, why I keep putting my hand into that popcorn bowl.  But if I were to wager a guess, I might admit that sometimes I worry I’m the villain of my own story too.  And that if I understand what a real villain looks like, I can work on being the hero.

I have one last confession: Damien does smirk. Once.