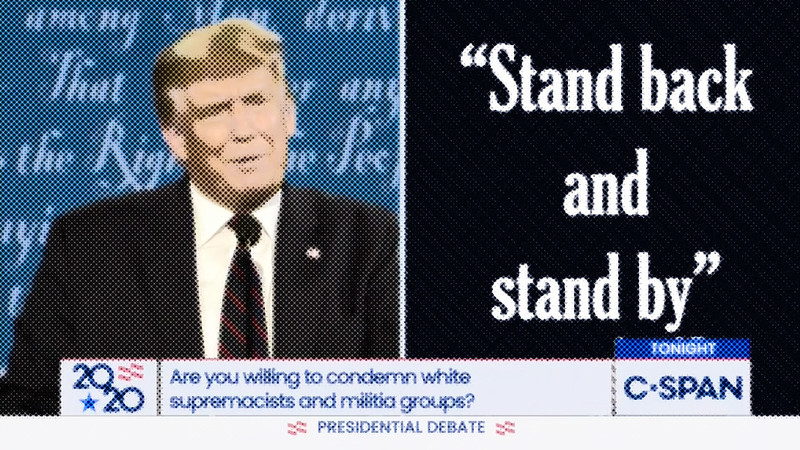 Screen capture from C-SPAN, photoedited by me.

Last night, after catching up with a debate that it turns out I was 100% correct not to watch live, and thus still have a TV that’s functional because I didn’t throw something heavy at it, I wrote this on Twitter:

Now it’s the next morning and it still looks like that was the accurate takeaway from the debate. If there was still somehow any doubt in anyone’s mind that Trump is in the tank for white supremacy, because white supremacy is in the tank for him, last night’s “debate” should have taken away that fig leaf. Not only could Trump not bring himself to disavow white supremacists longer than a sentence or two, he doubled down on them and effectively told them to wait for his signal. Certainly the white supremacists have taken it that way: “Proud Boys” and neo-nazis are openly saying they’re waiting for his further orders. He signaled to them that they were his personal paramilitary shock troops, and they have responded: Yes. Yes they are.

Let’s be clear about this: A sitting president of the United States has openly and actively claimed control of a legion of white supremacist domestic terrorists, and that legion of white supremacist domestic terrorists has openly and actively told him they’re his to command. You can’t pretend it didn’t happen — the white supremacists certainly aren’t pretending that. They heard him loud and clear. This wasn’t a dog whistle. “Stand back and stand by” is an explicit admission of control and a passing of orders.

Four years ago, after Trump, much to the dismay of himself and others, was elected to the presidency, I wrote about the Cinemax Theory of Racism, about how people who said that they voted for a racist for reasons other than his racism were still on the hook for supporting a racist. The racist in question, Trump, was never coy about the racism (and sexism, and every other bigotry he offers on display); it was there front and center, all through the campaign. When people claimed they were voting for him for other reasons, they were saying “I want this more than I’m worried about his bigotry.” Perhaps, presuming they were concerned about that they were worried about his bigotry at all, they were of the opinion that once in office, his tendencies would be moderated by his advisors and underlings.

It’s one reason why they exploded with joy last night after Trump’s command to them. For just a moment, senpai well and truly noticed them. And sure, today, the underlings have to pretend that what actually happened didn’t actually happen, and maybe even Trump himself will be prodded into walking back what he said. Again, the white supremacists understand how that all works. They also know that Trump has told them he knows they’re in his pocket, and he likes that they’re there. They like it too. This is where we are, four years in: A president who waves to white supremacists in a debate, and then his underlings pretend that he didn’t and are angry that you saw it, even as the white supremacists are quite happily waving back.

Which is the point: Four years ago, a Trump voter who hoped to avoid being splashed by his bigotry and white supremacy could hope someone would keep him in check. Today, when the man might as well have a neon sign over his head flashing “The Nazis Will Riot When I Say So,” they don’t have either that luxury or excuse. Americans generally are not better off than they were four years ago; the president has had a disastrous four years in office and has no actual plans for the next four, other than grift and white supremacy. Any attempt to get him to articulate a policy will result in an answer that’s fifty percent rambling (probably lies), forty percent self-congratulation (definitely lies), and ten percent appalling (and thus probably true). Again: all Trump has to offer is grift and white supremacy. That’s all there is. That’s pretty much all there ever was, it turns out, but now there’s no pretending otherwise without looking like a fool.

Trump’s supporters are generally not likely to get onto his grift, so that just leaves white supremacy as the thing they’re getting out of the next four years. That’s the platform, that’s the policy, and that’s the promise. That’s pretty much all Trump supporters are voting for, here in 2020. They can pretend it’s something else — anything else! — but that’s the deal, and none of the rest of us at this point need to pretend otherwise. White power and stripping down the US for parts: Trump 2020.

If it works, and Trump is elected for a second term, then I don’t expect that Trump is even going to bother with pretending that he or his administration is opposed to white supremacy, or that he isn’t a white supremacist. After all, white supremacy was what he was offering, and it worked. As Molly Ivins memorably said, you dance with them what brung ya. He’ll be under no obligation toward, and have no interest in, pretending otherwise.

And if it doesn’t work — and let’s again be clear, at this point, it doesn’t look like it will, and Trump’s window for legitimately winning the election is closing rapidly — well. The Proud Boys and the neo-nazis and all the other white supremacists are standing by. Trump asked them to. Loud and clear, and in front of an entire nation.