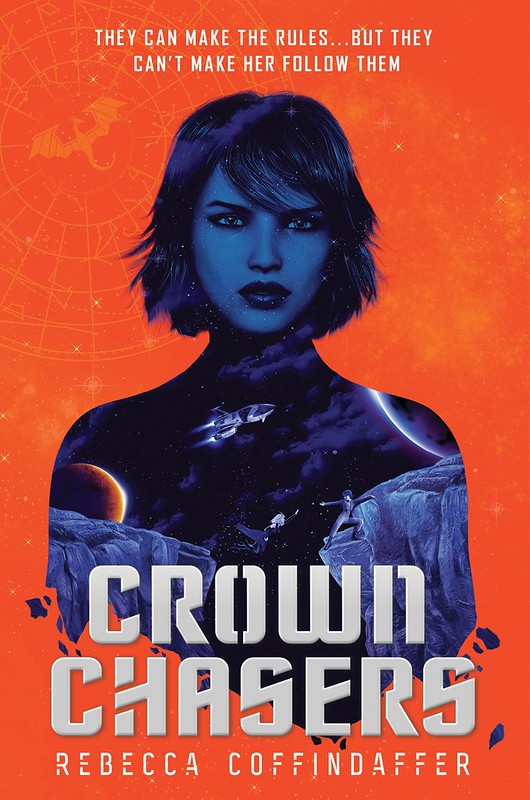 Sometimes, despite all your efforts to the contrary, you have to think about being the hero. Or so author Rebecca Coffindaffer might argue, in the context of her novel Crownchasers.

I love a reluctant hero.

I’ve loved them ever since I sat, wide-eyed, as my dad read The Fellowship of the Ring out loud and I listened as poor Frodo and Samwise found themselves further and further entangled in the fate of the One Ring. I love Ellen Ripley, who never wanted to go back to that damn planet but still ended up on a Weyland-Yutani ship. I love Buffy Summers, the Slayer who just wanted to be normal.

It’s that moment in Gladiator. When Russell Crowe’s Maximus is offered the imperial throne of Rome. With all my heart, no, he says, and the great Richard Harris as Marcus Aurelius replies, That is why it MUST be you!

I created the main character of Crownchasers, Alyssa Farshot, in the vein of some of my favorite heroes — Han Solo, Indiana Jones, Buffy, Kara “Starbuck” Thrace. She’s quick with a comeback, runs headfirst into danger, and is really great at the controls of a spaceship (but absolutely terrible with her own emotions).

And like General Maximus Decimus Meridius, she stands at the heart of an empire and is offered power she doesn’t want.

Alyssa is the niece of Atar Faroshti, the emperor of 1,001 planets — his only true heir, really — but she has no interest in the throne. Her eyes are on the stars, searching for the next great discovery, the next exhilarating experience, as she crisscrosses the galaxy in her beloved starship. But when her uncle’s health deteriorates suddenly, he calls for a crownchase — a race across the galaxy between the most elite families in the empire to find the royal seal and claim the throne — and Alyssa is pulled back into the tangled web of imperial politics that she’s been working so hard to escape. She knows all too well the kind of damage a struggle for power can do — most of the Faroshti family, including her mother, was lost to a war over the crown — and she’s never wanted to go down that road. She just wants to be…Alyssa, free to choose her own path and make her own (oftentimes questionable) life choices.

When I started writing Crownchasers a few years ago, what I needed most was a project where I could challenge myself to put the voice front and center and rediscover a little of what made writing fun. And writing this dashing, funny, thoroughly reluctant hero was most definitely fun.

But even as I pieced Alyssa and her story together, I struggled with whether we needed another reluctant hero, especially in the world we live in right now. A world where so many of us feel our powerlessness amplified by every new crisis plastered across the churn of media, and no matter how much we shout about the corruption and inequality and violence and suffering, the response from those entrenched at the top is, “Who cares?” Could I even still love a reluctant hero as I watched what was happening, knowing how much I would give to stand toe to toe with the rich and powerful and have the leverage to make a difference, make them listen, gain by feet instead of inches? C’mon, Becks, why write another reluctant hero?

Frodo steps into the middle of Elrond’s Council and volunteers to go to Mordor.

Han Solo and Chewie reappear in the middle of the battle against the Death Star.

Ripley gears up and wades into the heart of the xenomorph nest.

Buffy steps out of her front door so she can save the world again.

The power of that decision, where you can feel in your chest how much the character would rather be doing anything else in the world but they turn and choose to fight anyway — that is the true crux of the reluctant hero. They do it because they can, sure, but mainly they do it because it’s right and deep down they always knew that.

I wanted to take Alyssa Farshot on a journey like that. A journey that includes so much of what I love about science fiction and space opera, galactic politics and starship battles, and traveling faster than light between strange new worlds. But also a journey that, at its very core, is really about one reckless, wiseass, wonder-filled girl realizing she has the responsibility to become the hero she never wanted to be.