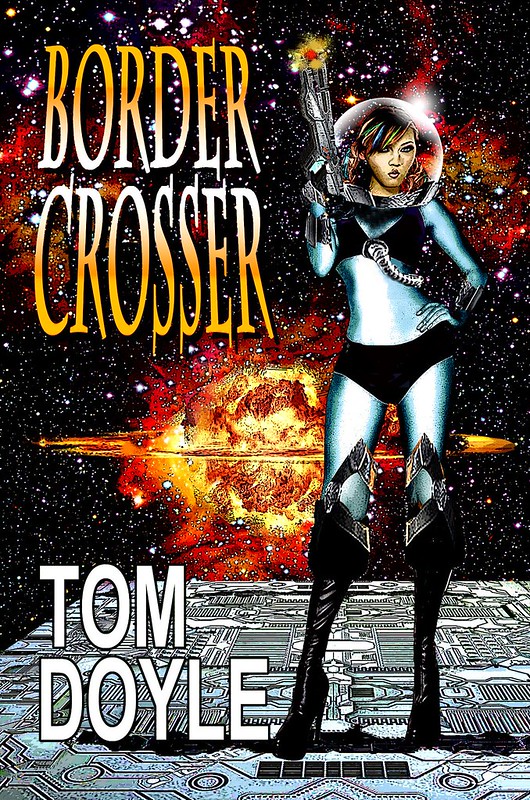 The human brain comes in almost infinite varieties, but for the future that Tom Doyle imagines in his novel Border Crosser, his question is: Will all of those brains, and the humans who possess them, be welcome?

Does the far future have a place for mental illness?

This is a question at the heart of Border Crosser. Indeed, a recurring theme in my stories has been finding work for the psychologically atypical.

But writing this sort of character proved much more challenging with Border Crosser. The secret agent heroine, Eris, has borderline personality disorder with a severe emotional amnesia component. This means that, though she remembers facts quite clearly, she has difficulty remembering how she felt previously about those facts, whether they’re events, things, or people. Her hidden employers want her loyalties to be extremely flexible, so they’ve amplified her condition to swing easily from love to hate and back again.

My challenge was keeping the narrative coherent despite Eris’s profoundly decentered mental state. Such a state is, in real life, a very different thing from its Hollywood version–in those fairy tales there’s usually a core fixed point of personality that others can guide toward a happy-ever-after ending. Instead of this more comforting narrative, I tell Eris’s story in her ever-fluctuating emotional present tense. Though Eris is well aware of her condition, there’s little she can do under the circumstances to alter it. If there’s to be a happy ending for her, it may be far removed from what others would envision.

Much of classic science fiction wasn’t much help in providing models for this sort of writing. For good or ill, characters in classic hard SF often look at the world with a scientific positivism and Enlightenment rationality, and their inner life appears to match this outlook.

Here’s a well-known example from another medium: before the current versions of the franchise, the Star Trek universe was largely free of mental illness–it was a rare aberration that for the most part either came from aliens or only happened to aliens. In the original series, the two episodes that dealt with old-fashioned human psychological issues, “Dagger of the Mind” and “Whom the Gods Destroy,” made it clear that serious mental illness was on the way out in the Federation. The few untreatables would soon be treated.

In contrast, the far future of Border Crosser has relatively few being treated for mental illness, and even fewer being treated without consent. Why? In that universe’s distant past (and our near future), there was a hard technological singularity, and human-like AIs nearly took over. One of the ways they exerted power was through very intimate and thorough psychological control of their human populations, and Eris’s nickname for this past conflict with the AIs is “the Psych Wars.” After the defeat of the AIs, humanity decides that, besides outlawing such artificial human-like intelligences, they’re also going to prohibit any infringement on the integrity of the human personality, cybernetic or otherwise. Thus, the so-called Psych Laws are born.

Thus, people we might expect to be institutionalized or undergoing treatment simply aren’t. The Psych Laws have some loopholes–severe schizophrenia with a clearly effective treatment is the big one. For everything else, society has developed work-arounds.

As with any legal system, those with power find ways to exploit the Psych Laws to their advantage. Eris’s employers do this by recruiting the psychologically extreme for various tasks. They go further and violate those laws by secretly conditioning and tailoring the psychology of their recruits, but in Eris’s world who will notice if someone’s mental illness becomes slightly skewed?

With her borderline personality and emotional amnesia not only untreated but amplified, Eris presents a character development challenge. In a usual character arc, the emotions evolve over time in consistent alignment with the character’s experiences. So, in a Pride and Prejudice romance scenario, the change of dislike into love has a clear emotional logic as the protagonists learn more about each other.

With her condition, Eris must frequently lack such emotional logic and consistency. She both approaches and avoids her targets, loves and hates them, though she’s usually in some sense spiraling toward them and a form of culmination. Despite her best efforts to make it an idée fixe, she can’t be much more straightforward in her pursuit of revenge against her employers.

Given the difficulties, why did I write this book? I could say that such characters are inherently interesting to me, but until now I’ve never questioned why. I think one reason for my interest is a deep childhood fear of involuntary commitment to a mental institution. I was a lonely kid with a big imagination back when One Flew Over the Cuckoo’s Nest represented a common film and TV plotline. But my worse fear was that they’d be right to put me away–that I was really in such a profoundly decentered state. That’s in part why I called the employers that Eris is struggling to escape “the Asylum.”

As I’ve grown older, that fear has transmuted to empathy. I’m human, and nothing human is strange to me. However, I still don’t like stories of mistaken or otherwise involuntary commitment.

But more important than my internal reasons and fears, I now live in a country that’s in a profoundly decentered state, and as of this writing there’s no Hollywood ending in sight. Eris is the best character with whom I can speak to this moment in a way that feels right and true. She battles nightmares that are as much of our own time as her far future–klept-oligarchs, theocrats, experts in genocide, human traffickers, and large-scale psychological manipulators. She is able to do this because she is at home in such a decentered world. Eris is my border-crossing hero against the monsters.

I hope that those slogging through our current conjoined internal and external nightmares find this book. This one’s for you.

(PS. I’d be interested in hearing readers’ views on critiques of Enlightenment rationality within and outside of SF, so please feel free to contact me through one of the links below.)

← The Big Idea: Rebecca Coffindaffer
A (Possibly Relevant) Blast From the Past →