The Fitbit Sense: A Review 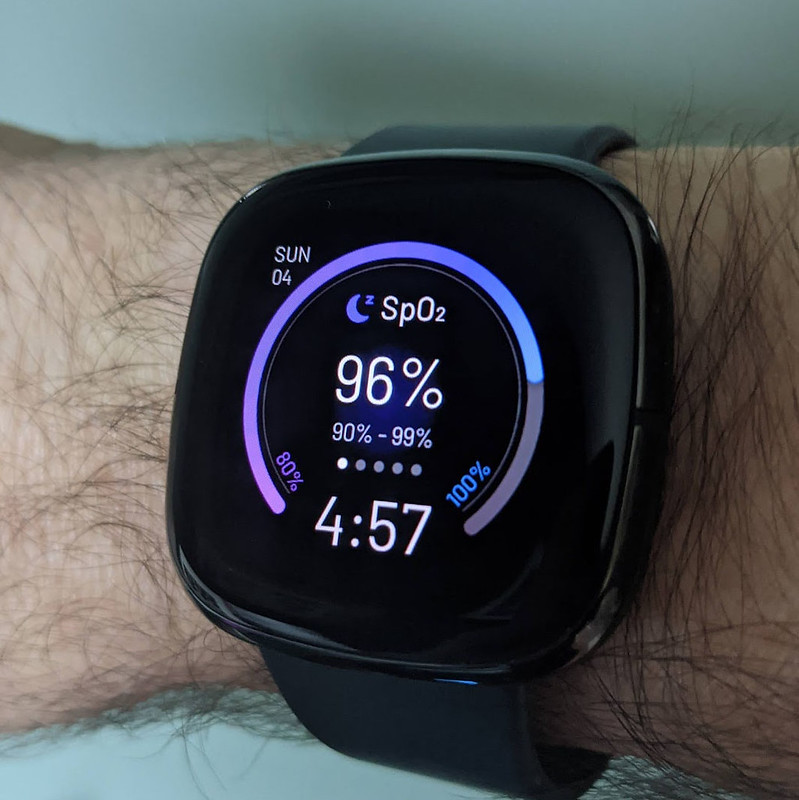 I’ve been using Fitbits for a couple of years, first to help with my weight loss and exercise regimen, and these days to help maintain my current weight and otherwise keep on top of my health (in a very general, this-is-not-an-actual-medical-device way). Fitbit recently announced a new top of the line model, the Fitbit Sense, and I was looking to upgrade, so I went ahead and got it.

I’ve had it now for a couple of weeks and I’m pretty happy with it, although frankly I’m not entirely sure that many of the new bells and whistles are things I need, or track things I need to be especially concerned about. For example, the Sense tracks my blood oxygen levels (you can see the blood oxygen tracking watchface above, which apparently is the only watchface that you can use if you want the watch to track blood oxygen levels, although why that would be the case is a little puzzling to me). While it’s nice to know that for the last two weeks I’m at a more or less consistent 96% blood oxygen saturation level, I’m not entirely sure what that means, how it matters or why, outside of a COVID-19-like situation, I need to care very much. I’m sure someone can and will explain in the comments why this is important, but at the moment, it’s just, huh, I guess I’m getting enough oxygen.

This goes for other features, like trackers for my skin temperature, heart rate variability and breathing rate, all of which are tracked whilst I sleep (the Sense also tracks how much and how well I am sleeping). I think all of these features are probably useful for someone; I’m not sure that person is me. To be sure, I think it’s fun to know my skin temperature last night was a degree less than it usually is (I had a leg out of the blanket for most of the night), but again, so what? For me it’s just kind of random data, and not data that is exact enough necessarily to be of medical use (again, the Fitbit people make pains to note the Sense isn’t strictly a medical device). I’m sure all this information is in the ball park; I’m just again not sure why I should care.

The feature that sort encapsulates the Sense’s “sure it’s cool, but also, so what” suite of features for me is the EDA scan, which is supposed to trace “electrodermal activity” on your skin to give you an idea of how stressed you are. You start up the app on the phone, put your hand on the watchface (covering the metal band that goes around the watchface), and then you bliss out for a couple of minutes while the watch senses how many electrical twitches you have in your hand (I’m, uh, paraphrasing here), which apparently correlates to your stress levels.

Does it? I mean, maaaaybe? The first time I did I felt pretty relaxed and it told me I had had 11 EDA events in two minutes, which seems like a lot. The next time I did it, I got zero EDA events (which is supposed to be good!), although I personally didn’t feel any more relaxed and indeed had just got done reading news about our damn fool president doing some damn fool thing. As other people have noted, taking a couple of minutes just to be still and bliss out isn’t a bad thing; I like taking the EDA test just to have a moment to do nothing. But I don’t know how accurate the test is as it relates to my actual stress levels (likewise the numerical value it attaches to my overall Stress Management level). I feel more than vaguely that it’s probably a bit of “we’re making things up to have something to sell” here.

Not that I’m accusing Fitbit of any particular nefariousness, or at least, if they are engaging in nefariousness, then so is every other smartwatch manufacturer out there, including Apple and Samsung, since all the smartwatches these days have more or less the same suite of health and wellness trackers. We want to be able to quantify how we’re doing and feeling, and they want to sell smartwatches, so in the end everyone is happy, I suppose.

And in point of fact I am happy — like I said, having all this information at my fingertips is fun and interesting and maybe once I figure all of it out, who knows, it might even be useful. For now, though, it seems mostly frippery designed to make me feel like I’m doing something for my health and to justify the $330 price point.

It turns out I’m primarily still using the Sense for what I used my very first Fitbit for, and every one since — tracking steps and heart rate, and also, using the Fitbit app and Web site to jot down my calorie consumption over the course of a day. And for that, the Sense, like all the other Fitbit appliances I’ve used, does a pretty good job! It’s why I keep getting the company’s products.

Because the Sense is Fitbit’s top of the line product, it also has some other nice bells and whistles, including an improved screen, GPS in the watch itself, and a limited but nice number of apps one can use from the watch, including Spotify and an NFC payment option, as well as the option to get phone messages and other alerts on one’s phone. I personally use almost none of these — I turn off nearly all notifications on my phone as it is — but because I’m a tech dweeb who geeks out at multifunction, I like that I have the option of all this stuff I don’t use.

Two very specific things I can criticize the Sense for: One, Fitbit did away with the physical side button for a “haptic” button, which would be fine if that button worked reliably, but it doesn’t, so it’s just annoying and largely not useful (you can also tap the screen to wake the watch up and scroll about, but I’d prefer having an actual button). Don’t replace things if what you’re replacing it with doesn’t work as well. Two, there’s a bit of a time lag when one scrolls through for apps and information, which is not great, considering this is the top-of-the-line Fitbit.

(Oh, and — I’m currently using the Fitbit Premium service, as the Sense comes with a six-month trial. It offers a bunch of workout and fitness stuff and apparently I can even chat with a Fitbit expert to tailor a workout regimen if I want. I can already tell this is more than I will ever use and will probably drop it before I get charged $10 a month for it. But if this is the sort of thing you think is useful, then, hey, it’s cheaper than Peloton, I suppose?)

I like my Fitbit Sense and I’m happy with my purchase. It does all the things I want it to do very well, has a bunch of functionality which might be useful for me if I can ever figure why I should care about it, and otherwise has a feature set I’m not gonna use but in the abstract enjoy that I have the option for. It looks good and I think it’s worth considering if you’re not already hopelessly tied into the Apple watch ecosystem or otherwise have another smartwatch family you’ve pledged your troth to. I do think people should look to see if they need all the functionality the Sense offers, since Fitbit has several other options (including the newly released Versa 3) that cost less and do the core functions of Fitbit just as well, and offer the same access to the Fitbit app and site. If what you really want is just steps and heart tracking, there are other ways to get that done, without the hit to your credit card.

But if you want all the smartwatch things, then sure, give the Sense a look. It’ll give them to you, whether you need them or not.

29 Comments on “The Fitbit Sense: A Review”