Nostalgia is a Luxury 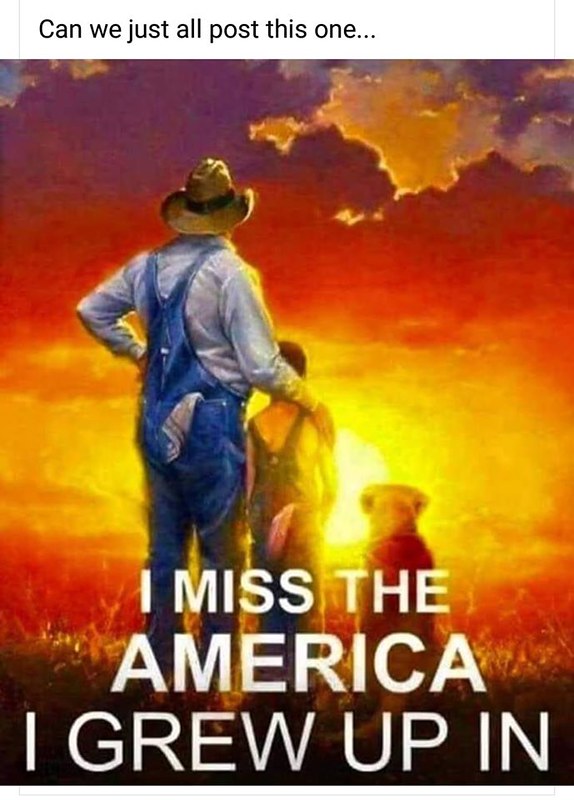 The image above was posted on Facebook today, and I had an immediate reaction to it, which I posted on Twitter: “The problem with this picture is, having grown up in the 80s, I assumed they are looking at the end result of a US-Soviet nuclear exchange, and this is the very instant before their terrifying death.”

Moreover, assuming that the two people (and the dog) in the picture are looking at a sunrise or sunset rather than atomic annihilation, their dress codes to the rural 1930s, i.e., Great Depression times, which you may recall were not actually a great time for rural Americans, or indeed the nation generally. I don’t suspect most of the people still alive who lived through it miss it all that much. No matter how you slice it, this attempt at nostalgia plumping misses the mark.

But it does remind me of my own relationship with nostalgia, which is that I don’t have all that much of it. In fact I don’t miss the America I grew up in — the America I grew up in, aside from being saddled with the strong possibility of nuclear war, had leaded gasoline and smog, it had stagflation and an oil crisis, it was a place where people smoked everywhere, including on airplanes, and people were still comfortable tossing out racial epithets in casual public conversation. It was a place where gay and lesbians and trans people couldn’t get married but could get arrested for existing in public. In my lifetime banks were not obliged to give women credit cards or loans without a male cosigner, women didn’t have the right to control their own bodies, and in the America I grew up in sexual harassment was an expected part of the cultural landscape.

So, yeah, the America I grew up was kinda terrible! And the parts of today that aren’t great are a direct result of what was terrible back then — you may have noticed we haven’t quite gotten rid of racial, sexual or gender issues, and if the GOP gets its way we’ll be saddled with them longer, because that’s how white supremacy do, and the GOP is now a white supremacist party, from the top on down. We also have the largest income and social mobility disparity in over a century, and again, that’s a direct result of policies that got their start in the era in which I grew up.

Part of the reason people have nostalgia is because they yearn for a simpler time — which for most people means a time when they were young, and didn’t know or didn’t care about the rest of the world. This presumes, of course, that one’s youth was simple, which is another reason I don’t have nostalgia; my childhood was not. It had long stretches of poverty and domestic uncertainty and I spent a lot of my time not knowing what was going to happen next — and even if I did know, I had no control over it. To be clear I also had good times and good friends and people who loved and cared for me; I’m not gunning for a “worst childhood” award here. But neither am I nostalgic for my childhood, nor for the era in which it existed.

The America I grew up in was just as troubled as the America I’m in now — differently troubled, perhaps, but no less so. The America my parents grew up in was just as troubled as well, as was the America my grandparents grew up in, and my great-grandparents, and so on and so forth. Hell, some of my ancestors actively created American trouble, which I am not proud of but which is also a fact. Nostalgia is a lazy fallacy of the comfortable, or perhaps more accurately of the people who were once more comfortable than they are now, and wish they could be as comfortable again, without confronting their own complicity in how the world “suddenly” became less comfortable in the interim.

Let me tell you of the moment I feel the closest thing to nostalgia for: it’s 1999. Krissy and I had our first house. Our daughter was newly born. I had gotten my first book contract, or was about to, and was successfully freelancing as a writer. On the evening of one of those days, Krissy was bathing our infant daughter while I talked to her about the day. Our dog Kodi napped contentedly in a corner, and a song was playing in the background.

It was a simple, ordinary and absolutely unremarkable moment in my daily life, and yet in the moment I had the presence of mind to recognize that in that simple, ordinary and absolutely unremarkable moment, I was absolutely and transplendently happy with my life and the people in it. I was happy. We were happy. We were all happy together. It was a clarity of joy that one gets only a few times in one’s life, and here it was, while my wife was bathing my daughter and talking to me about nothing in particular. It was at the time, and remains in my memory, a perfect moment.

It was a perfect moment, I will note, in a troubled world, because 1999 very definitely had its troubles. There were troubles behind it and troubles ahead of it. The world was not better then than it is now. I just got to have that moment of peace in it. And then the moment was gone, but that’s not a bad thing. I’ve had other moments of near-perfect joy since, each of them in a world that was troubled in its way.

Maybe that’s another reason why I don’t have nostalgia: Because in every time and in every era, there are chances for those moments, with people you love. Nostalgia won’t bring old moments back, and old ways won’t work the same in new times.

I don’t miss the America I grew up in. I want to make the America I live in now better, so that everyone has a chance to have the moments of joy that I have been privileged to have.

PS: Here is the song that was playing in that moment I’m talking about above. Interestingly, the song is, in its way, about nostalgia and the impossibility of either living in the past, or returning to it. Now is what we have. Live it and make the future better.

103 Comments on “Nostalgia is a Luxury”