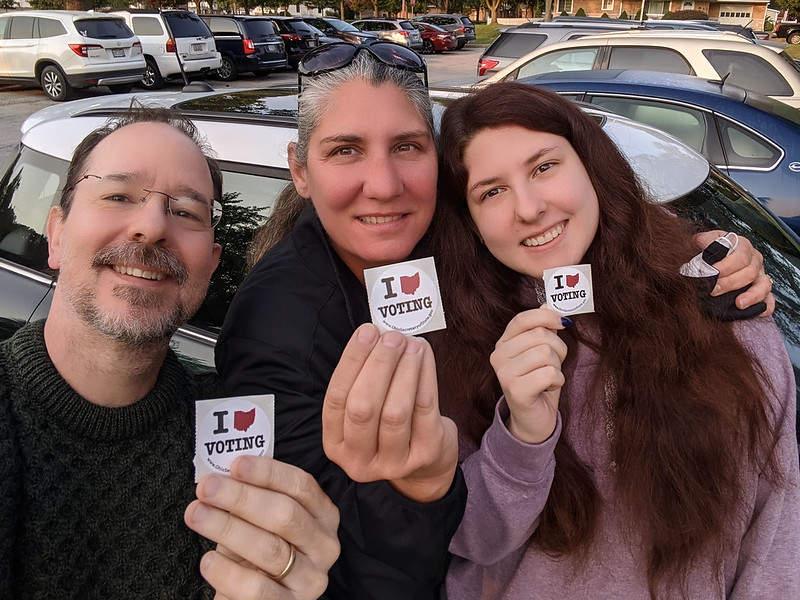 This year there are many good reasons to vote early, but for the Scalzi family, two stood out, one practical and one existential. The existential reason is that this year out of all other election years voting is under attack, specifically by the party in the White House and by the president, who has already signaled that he intends to deny any outcome that doesn’t make him happy. So better to vote early and in a manner that leaves no doubt one’s vote has been received and will be counted. The practical reason is that Krissy is having (minor) surgery tomorrow, and although that shouldn’t impede her ability to vote later, better safe than sorry.

Today is the first day of early voting in Ohio, so this morning the Scalzi family packed ourselves into the car and drove to the county seat of Greenville in order to vote in person at the board of elections office there. I’m pleased to say it was busy — apparently a lot of folks had the same idea we had about getting everything taken care of — but everyone was wearing masks and appropriate distancing was happening throughout the process. Most of the voters were on the older side; Athena was very definitely the youngest voter there, and I think Krissy and I were the next youngest. Young people, don’t forget to vote, and don’t forget that you can vote early.

The voting machines were new this year: They recorded the vote electronically, printed out a card with the voters choices on it, and then the printed card was fed into a repository that scanned the card as it was stored. I feel reasonably confident that my votes will be counted accurately, although to be clear I have not felt in previous years that they wouldn’t. Darke County, Ohio, whatever else it might be, is not in itself a hotbed of voter suppression.

I can’t say how the other two Scalzis voted, as I was not looking over their shoulder while they were voting, but I can say how I voted: No surprise at all, I voted Biden/Harris and otherwise voted for Democratic candidates on the ballot. With regard to the US Representative vote, this will be a futile gesture, as Warren Davidson, the Republican incumbent, is certain to win, having received nearly two votes in 2018 for every vote his opponent, Vanessa Enoch, got. Enoch is back this year and will probably do about the same. This is a very very red district; the Democrats haven’t won it since 1936, and 2020 will not be their year. Warren Davidson is in fact a solid representation of OH-8, and philosophically I’m fine with that. He’s not representative of my politics, however, so I didn’t vote his way. That’s how it works!

I do think my vote for Biden/Harris may be more representative of Ohio this year, however. Current polls have Biden and Trump evened up at around 47%; I suspect they’ll remain in or near a statistical tie through election day and we’ll just have to see what happens. If Trump loses Ohio, I suspect there is no (legal, fair) way he’ll be able to argue he didn’t lose the election, not because Ohio is a bellwether state this year but because if he’s lost Ohio, he’ll already likely have lost Florida and Pennsylvania and other “must win” states. If that turns out to be the case, I’ll be delighted to have had my vote be one that helped flip the state away from him.

In previous elections, and usually in local positions, I’ve voted for Republican candidates, particularly if they were running unopposed, as they often do for unglamorous county-wide civil jobs. This year I couldn’t bring myself to do that. I think the GOP is in a dangerous place these days, and has become a top-down, authoritarian, amoral white supremacist cult of personality. Maybe that doesn’t matter when the position is, say, County Recorder, where the prosaic function of the office doesn’t offer much opportunity for the politics of the party to intrude, and the Republican is the only person running for the office anyway. But as a matter of conscience, I can’t support the GOP for anything right now, and honestly I don’t know when I can again. The Republicans running unopposed on the ballot will get their jobs regardless. Just not with my vote.

In any event: Hey! I’ve voted! I’m happy that I have fulfilled my duty as a United States citizen, proud I have yet again extended my unbroken streak of exercising my franchise — this is my ninth consecutive presidential election — and, frankly, relieved to have done it and to know that whatever else happens, I made it clear who I want in the White House and in the government, and equally as important this year, who I do not.

And, this year above all other years, I feel pugnacious about it. Dear Donald Trump and the GOP: Fuck you, I’ve voted. The fact you’re actively working to keep other US citizens from doing so, and literally destroying public infrastructure and the public trust in the voting system to do it enrages me on a visceral level, as a human and as an American. In a perfect world all y’all would be voted out and some of you would be in prison. But I’ll settle for now with Trump out of the White House and the Senate flipped. That’ll be a good start. Let’s hope it happens.

To those of you reading this who are adult US citizens: Remember to vote. I recommend voting early and in person if that’s an option for you. If not, and you choose to vote absentee, vote as early as you can, mail your ballot as quickly as you can, and make sure you follow all the directions (and have sufficient postage!). If you are voting on election day itself, know where your polling place is, take the day off work if you can, and prepare to be in line for as long as it takes to vote (bring snacks! And an extra battery for your phone!).

However you do it: Vote. Get it done, folks. It matters, this year above all. I did my part. So did Krissy and Athena. Now it’s up to you.

← Nostalgia is a Luxury
The Scalzi Endorsement: Joe Biden →