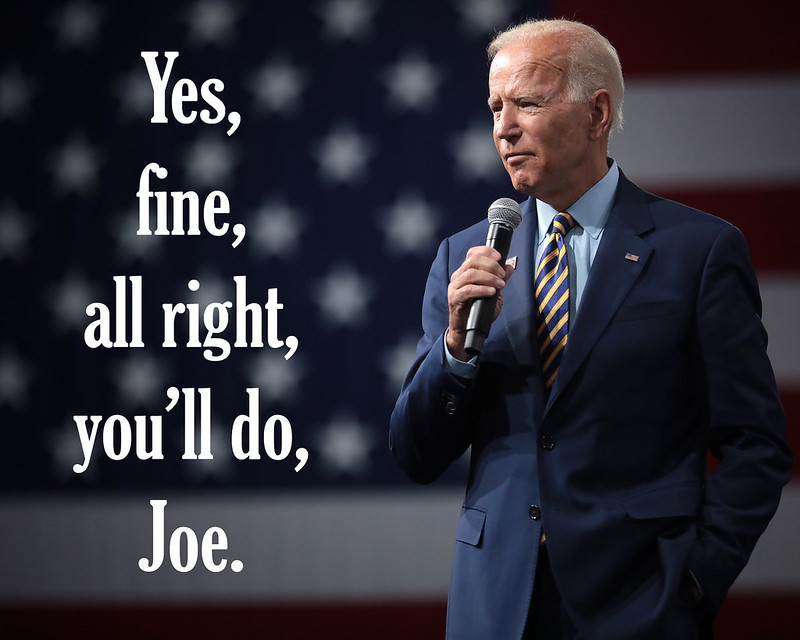 Inasmuch as I have, in fact, already voted for Joe Biden, I think it’s both safe and reasonable to come out and endorse the man to be President of the United States. I also think it’s reasonable to point out that this endorsement will not precisely be the most fulsome and ringing endorsement that I have ever given to a candidate for president, even as I acknowledge and recognize that voting for Joe Biden might have been the most important vote for president that I have ever made, or might ever make. Welcome to 2020, folks. What a fucking mess it is.

To be clear: Joe Biden will (probably) do fine as president. He wasn’t my first choice, or my second choice for that matter, but he picked my first choice to be his Vice President, so that’s all right. Biden is a career politician and in his 78 years has made some exceedingly questionable choices, from casual plagiarism to how he handled Anita Hill during the Clarence Thomas hearings. He has a bit of a tin ear and he is prone to gaffes, some but not all of which can be ascribed to navigating around a stutter. Also, he’s also shown that he can roll with changes and can, when necessary, read a room. He understands the job he’s trying to get, and he really does understand it’s not all about him. He’s your basic pol: Mostly competent, mostly a man of the people, mostly someone who when you look at him, your basic reaction is, well, okay, fine, he can probably do that job.

This is what I mean by not a ringing endorsement! Joe Biden does not set me afire with political passion. He in himself does not strike me as an epochal candidate, the way Barack Obama was, or Hillary Clinton might have been as the first woman president. He’s old, white, middlin’ and middle of the road. Certain sitcom characters aside, he does not inspire fervor in anyone. Even the character assassination of him from the foamy right lacks real passion, in no small part because he is old, white, middlin’ and middle of the road, and not, say, a black man, or a woman. No one expects greatness from Joe Biden. They expect adequate competence. He’ll probably be fine is the mantra here.

And he will, again, probably do fine! He’ll be just fine. His administration will be just fine, full of smart, competent people who will also do just fine, not a revolution but maybe some decent, solid steps forward to where we as a nation need to be. His fuckups will keep the Sunday talk show people employed but normal people won’t have to care much. A Biden administration will probably not consume every waking moment of your day with an existential dread about what awful racist shit it’s up to now, and how it might undermine the basic fucking fabric of American society.

Which, oh, hey, brings us to Donald Trump, the monumental fuck-up who is currently president, and who, as I write this, is careening through the White House, pumped up on steroids and experimental drugs, shedding viruses like a white cat sheds on a black shirt, and is thinking that lurching out of a hospital to wantonly infect others somehow projects strength, not sociopathy.

He is, literally, the worst. After four years, I don’t feel I need to break out all the reasons that he is the worst, although to lightly gloss, it’s to do with the corruption, the white supremacy, the self-dealing, the incompetence and the fact that 210,000 Americans (so far!) have died from a viral pandemic that Trump even today, even now, as it infects his own body, wants to pretend is not that big of a deal, and choses to do nothing useful about. The worst! The worst president in living memory for certain.

(Of all time? It’s a fight! James Buchanan actually broke the country so he might be the least competent president, and Andrew Jackson is pretty much the platonic ideal of a genocidal asshole, so he might be the worst human to be president. But Trump comes a close second in both categories! So he might be the worst president of all time simply on points. But even if Buchanan or Jackson (or Andrew Johnson, who was no treat either, or Warren G. Harding, I mean, shit, we really do elect some awful people to the gig) squeak by, again, no one alive has seen a worse president. No one alive has seen one so willfully unprepared for the job, one so disinterested in the job, one so ignorant of its scope, or one so unconcerned how all of that will affect those who have to suffer his administration, staffed as it is with incompetents and grifters because saner and smarter people either would have nothing to do with it, or left when they realized that Trump wanted sycophants, not useful advisors.)

The United States is not a better place for having Trump as president. The world is certainly not a better place. Most Americans are not better off now than they were four years ago. As much as Trump and his proudly ignorant, proudly racist and proudly angry supporters would like to suggest otherwise, a whole lot of the blame for all of that can be laid squarely at Trump’s door. Trump had no plan to be president — he didn’t want to be president, he just wanted attention — and he has no plan on what to do for another four years as president. He doesn’t want to be president now; he just doesn’t want to be branded a loser, and he doesn’t want to be on the hook for the hundreds of millions of dollars in personal loans coming due in the next few years. His presidency was born of grift and desperation, with a heavy dollop of white supremacy that history, I assure you, will find unforgivable.

Trump did not deserve to be president, does not deserve the job now, and certainly does not deserve another four years of it. Given the prospect of another four years of literally the worst president in living memory and possibly of all time, almost anyone the Democrats could have nominated would have had my vote in the general election. This was a done deal as of November 9, 2016, because it was pretty clear to me how bad the next four years were going to be, nor was I wrong. It makes no sense to deny that for the 2020 election, I was going to vote against Trump far more than I was going to vote for whomever the Democrats offered up.

Four years ago, I don’t think I was expecting that would be Biden, who will come into the White House as the oldest person to be elected to the job. I honestly believed that he figured he missed his shot, would write a memoir and then fade out. Surprise! Here we are, and here is Biden, and here is the 2020 election.

It is, and I say this without drama, the most consequential of the nine presidential elections I have to date voted in. We get to decide whether we will get four more years of corruption, of white supremacy, of self-dealing and of, literally, plague… or at least four years of not all of that. Four years of probably decent, probably unremarkable governance, by and from people who mostly know what they’re doing and mostly want to be useful when they do it, headed up by Joe Biden.

I’m not at all certain America will ever recover fully from four more years of Donald Trump. I’m very certain we can survive, and perhaps even thrive, with at least four years of Joe Biden.

So yes, Joe Biden, all right, fine, you’ll do. You got my vote. I hope you will get the vote of the majority of Americans, and (critically, due to our fucked-up system of choosing presidents) enough of the votes in each of the fifty US states to get you well above 270 electoral votes.

And more than that, I actively endorse you for president and encourage everyone to vote for you, so you can be a calm, unflashy, quiet, competent president who allows us all to fucking not have to concentrate on what terrible, awful, undemocratic and unamerican thing you are doing today, just because you want to and the people you surround yourself with are too ignorant and too corrupt to stop you.

Please be a perfectly fine president, Joe Biden. I need sleep. And so does everyone else. Thanks.