How “The Good Place” Kinda Messed Me Up 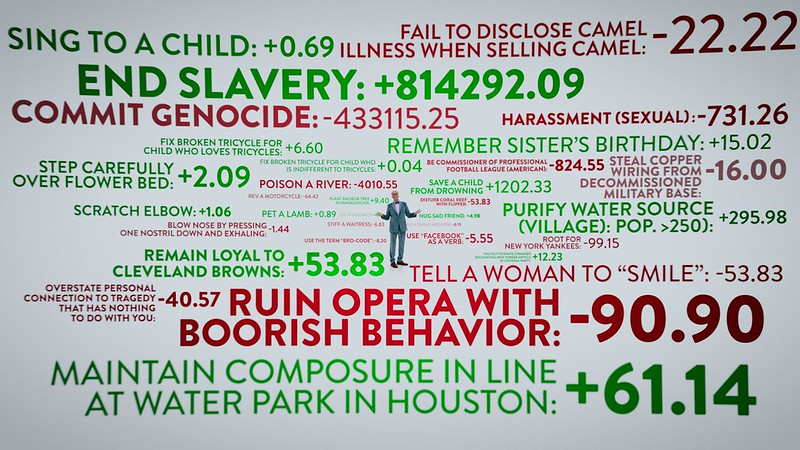 Do you ever wonder about life after death? If you’ve ever seen The Good Place, you know that their version of the afterlife is based on a point system that determines a person’s goodness. When a person dies, they either have negative or positive points, depending on what they did in their lifetime, and that score determines whether or not a person goes to “the Good Place” or “the Bad Place”. It’s very much like a Heaven and Hell sort of thing, but without the religion/faith aspect and just based purely on if you were a good person in your lifetime or not.

For me, I’ve always believed there’s nothing after death. But I really like the idea that the only qualification for a nice eternity is that you’re a decent person. But it makes me wonder about how many points things are worth. In the first episode, they mention that you even get good points for making a sandwich! Does that mean that Subway workers get a shit ton of free good points? Is anyone who works at Jimmy John’s for ten years guaranteed to get into “the good place” even if they do a lot of bad stuff just because they’ve been racking up points for years?

I’ve only seen the first season of The Good Place, so maybe all of this gets explained later on (or maybe I just don’t remember since I watched it when it came out), but it really makes me wonder which actions are better than other actions? Is it better to give money to a person standing on the corner with a sign asking for help, or is it better to offer to buy them a meal? Is it better to volunteer at an animal shelter or adopt a highway? What gets you more points, helping an old lady carry groceries, or helping your neighbor change a tire?

Who is the decider of how many points something is worth? Who dictates what is a good action and what is a bad action?

Anyways, I’ve lived my entire life not believing in an afterlife, so I didn’t really think of whether or not my actions would affect anything like that, except maybe in the ways of like, “karma is a bitch”. But after watching The Good Place, I started thinking about the point value of every single one of my actions. Like obsessively. Would doing this make me go into the negatives? How close am I to zero right now? Would doing this give me a substantial boost of positive points? Of course, I didn’t actually base my decisions off of these thoughts, but they still nagged at me constantly, and still do, two years later.

I keep thinking, if I died right now, would I go to “the Good Place”? But I guess people often think that about Heaven and whatnot as well. I wonder if right now I’m in the negatives, or if I’ve been a good enough person in my life to be in the green, y’know?

I don’t want to say I’m worried about it, but it definitely makes me think. I want to be a good person so badly. But I worry that every good thing I do is actually just performative, that I do it just in case it gets me good karma. Just in case someone is keeping score. I want to be selfless and generous and kind, but if I do anything that is considered “a good deed” am I really doing it because I’m a good person, or am I doing it because I want other people to think I’m a good person? I mean, I do want people to think I’m a good person. But I don’t want that to be my only reason for doing “good” things.

In The Good Place (spoiler), one of the characters did a ton of good things in their lifetime, but she didn’t it for the right reasons, so she ended up in the bad place despite having done a bunch of stuff that should’ve gotten her positive points. I worry I’m like her a lot.

The Good Place legitimately made me reevaluate my life and all the choices I’ve made. Which is kinda whack. I definitely want to watch the other seasons, I just haven’t gotten around to it.

Anyways, have a good day!

58 Comments on “How “The Good Place” Kinda Messed Me Up”