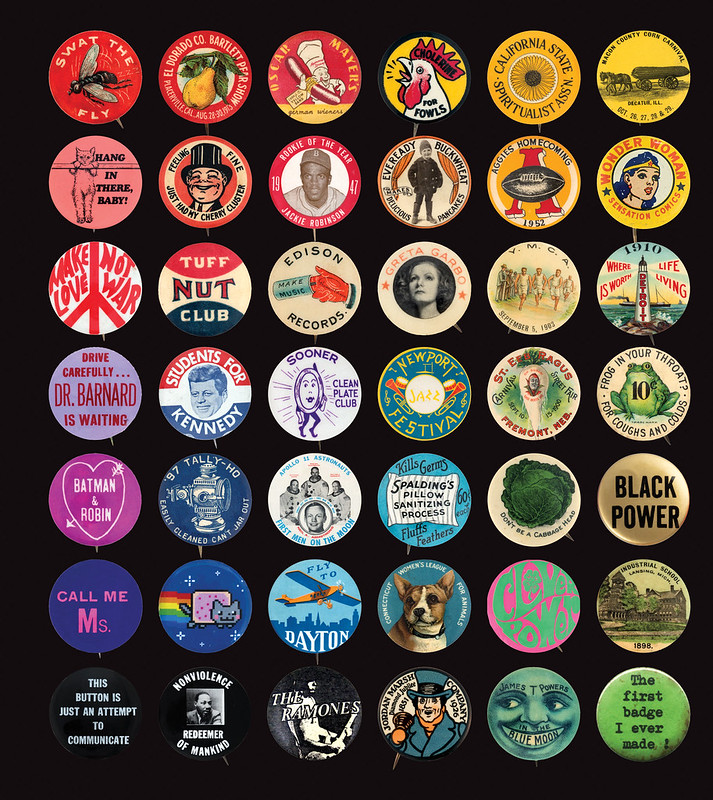 Few things in this world are as quirky a choice of fashion as a button, and according to author Christen Carter, few things encapsulate a story as well as one, too. This is their power — which might be why the title of the book Carter co-wrote with Ted Hake is called Button Power.

I bought my first button when I was twelve – it was one of the first things I ever bought with my own babysitting money. This little Snoopy and Woodstock button made me feel like we were all buddies. As a teenager, I would wear punk buttons, hoping to find other people that were into the same weird stuff as me. And I did! These buttons told a story to the world about who I was, and what I valued, and helped me connect to others who shared those values.  Today, I still wear them to express my political views, support a cause, and just wear art that I like.

Coming from a DIY/punk scene which was all about community, I wanted to help give others the means to share something about themselves and connect with their own communities. So, in 1995, I started Busy Beaver Button Company, and since then we’ve manufactured over 50 million buttons.

Along with making buttons, I’d been casually collecting them for many years. When I decided to create the Button Museum, I wanted to learn about the history of each button. My research led me to seek out an out-of-print book I had seen several years previously, Collectable Pin-Back Buttons written by Ted Hake in 1986, it’s still the bible for button collectors. It’s an incredible book, it shows a breath of styles and designs. I reached out to Ted and we became fast friends. To call Ted an expert is an understatement. He catalogued advertising and other popular culture buttons, basically created that button market for collectors. He’s been in the button dealing game for over 50 years. Ted and I both love the art and the stories (and the mysteries!) behind each button and we can talk about them forever.

After working on this book solo for about 5 years, I asked Ted if he’d like to create the book with me since I was asking him so many questions anyhow and I was way in over my head. To my delight, he said yes. We decided to gather our collections and organize by year, starting in 1896 and continuing to the present. For each year, we wanted to make sure that we caught the zeitgeist of the moment as well as any big events that took place. Our requirements to be considered in the book were:

Buttons may seem like a very niche, even quirky thing, but they can tell American history over the past 125 years like nothing else can. Buttons are a people’s history – they are mementos of personal pride, family reunions, and stupid jokes; sliced bread and electric mushrooms; punk rock and presidents; social justice, swimming lessons and space travel. They depict images that are both familiar and foreign. In their tiny format, buttons tell stories that are deep and wide.

In 1896, when the pin-back button was invented in Newark, New Jersey, it was really special to own a printed object; people weren’t as inundated with images as we are now. It’s fascinating how over time the messaging, the artwork, and the materials of buttons have changed to tell a story of what’s important to people and how we express ourselves.

Initially, Ted and I probably considered over 10,000 buttons before choosing the ones we wanted to include in the book. We ended up submitting 4,000 or so to the publisher. After lots of discussion and deliberations over each button, about 1,500 or so made the final round to be displayed in Button Power.

Ted, Jonell (Ted’s wife), and I went on many buttony adventures that took us around the country. We got to see the backrooms of the Smithsonian and visit famed collections in Newark, NJ and at the Met. We also spent so many hours in his office not just talking about the buttons, but about the inventors, the various manufacturers, the social context of them, the materials, how companies advertised and sold their buttons. How many times did we say, “What a beautiful button”?! To go into something so deeply and to find someone who cares and much and knows so much is an amazing treat. Making this book is one of the most fun things I’ve ever done!

← I Totally Forgot to Update the Site Today, So Here, Enjoy This Obscure Yet Tuneful Song
How “The Good Place” Kinda Messed Me Up →