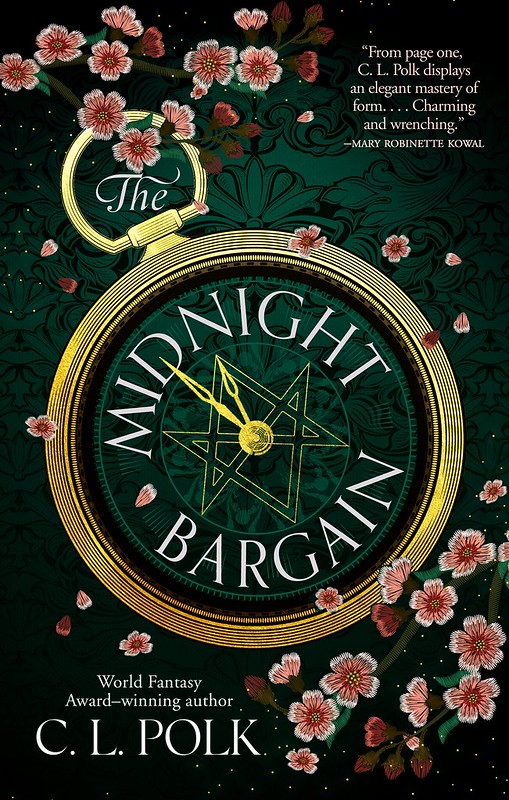 When people talk about The Midnight Bargain, they say nice things about how it’s a romantic fantasy with sharp social commentary. I’m glad they do, because while I wanted to write a story with the flouncy dresses and big hairstyles of the 18th century, the true big idea behind The Midnight Bargain is an image that I’ve seen on more than once over the years: a woman, with the silver curls and don’t-give-a-fuck aura of a crone at a pro-choice rally holding up a sign that reads, “I Can’t Believe We Still Have To Protest This Shit.”

Because wow, I can’t believe we’re still fighting for the right to control our bodies. I am astounded that even today, a person capable of carrying and birthing a child will not have their wishes respected if they become pregnant, when they don’t want to be pregnant anymore (and I don’t care what the reason is!) that in many states in the U.S., they can’t end that pregnancy. If I think about it too long, I start clenching my fists.

When I’m angry about something, it usually winds up in one of my books. This time, I’m digging into the dark side of hereditary magic. When magicians are born and not made in a fantasy story, we all assume that magicians will occupy a special place in society–advisors to rulers, if not rulers themselves, or members of groups with the ability to manipulate power on multiple levels. It seems almost inevitable that magicians will wind up dominating whatever society they’re a part of.

But that’s not the dark side I’m talking about here. Because you can imagine a world where natural born magicians have shaped a society where magic users are expected to improve the lives of others, and all kinds of noble things that I’ve enjoyed reading about. I spent an afternoon thinking about the creeping influence of hereditary magicians on institutional power, and then stumbled into wondering–what happens to the mothers?

Let me back up a little bit. If someone is a magician living in a society where magic is an advantage, and some people are born with it, and other people are not, then they’re going to want to pass that on to their children, to give them the same advantages.

Right? I mean we see that all the time in our history. We know that most of the places in expensive, prestigious schools don’t go to the best scholars across the society, but to the children of alumni who also attended that school, sometimes for generations, regardless of how well they performed in school previously. We know that wealthy people generally had generations of wealthy people behind them. We know that working class people are less likely to hold political office than wealthy people. We know that people want their children to have all the advantages they can give them. I don’t think that the inheritance of magic would be any different from the inheritance of land or wealth or power. But what does that mean to the people who can carry children?

I am a bit of a pessimist. I can’t look at ages of sexist beliefs and practices that perpetuated themselves in society after society for thousands upon thousands of years and even entertain the idea that child-carrying people in a world with hereditary magic would be given a scrap of meaningful choice about how they put those bodies to use. I simply cannot. And so I am certain that the addition of hereditary magic would only mean more oppressive control placed on the people who can carry and birth children.

But I wasn’t sure that the simple cruelty of sexism was enough. And so, I tied the essential element of magic–the assistance of a spirit capable of altering reality in specific, individual ways–to the desire to have the home of a body. To feel, see, touch, hear, taste, and smell with a body. And that it was possible, if a spirit managed to inhabit a developing fetus at just the right time. Faced with this problem, a sexist society is simply going to find a solution that puts all the burden on the person capable of carrying the child. Sound extreme?

Okay. Go ahead and list ten methods you can use as a sexually active person to reliably prevent pregnancy in the 21st century, assuming that there’s a penis and a vagina in intimate congress. You have one minute. Go!

That’s because there aren’t any. Oh, I know there’s a contraceptive pill that reached clinical trials that effectively stopped sperm production. Can you walk into your Wegmans and get it? No? Then it doesn’t really count, does it?

And that’s the simmering, terrible anger that lives under the flouncy dresses and genteel conversations in The Midnight Bargain – that some people bear almost all the responsibility of carrying and birthing children, and some people barely have to think about it at all, and it is that way because the societies we live in deliberately shaped themselves to be so. And if that wasn’t enough, the people who don’t have to worry about it have more personal and institutional power over the bodies of the people who do.

But we do. So here I am. And if this is where you are, please know I wrote The Midnight Bargain for you.