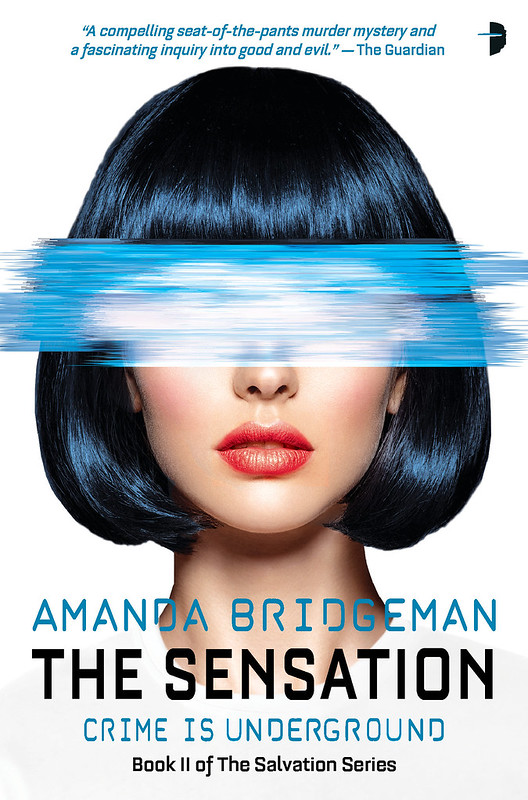 Ever feel like your tech knows too much about you? Like it’s literally in your head reading your thoughts? What if it was literally in your head? In Amanda Bridgeman’s newest novel, The Sensation, she explores a world in which neural implants are a reality, but much like the tech we have today, it might do more harm than good.

A discussion on our deepening relationship with technology has already begun in society. Whether it’s our spiraling addiction to social media, organizational data breaches or political hacking, many believe that technology is actually starting to make our lives worse, not better. We’re more hooked to our notifications than we are to our loved ones, and advertisers have harnessed our data to create powerful selling tools that know more about us than we do ourselves. That said, there’s nothing really wrong with being social online or buying things you want or need, right? But what if technology was used to control people in more overt and sinister ways?

The Sensation, book 2 in the Salvation series, follows homicide detective, Salvi Brentt, as she hunts down sadistic killers in a world left divided by a tech-terrorist attack known as The Crash. In the wake of The Crash, which left early adopters of connected neural implants either dead or brain damaged, some elements of society turned their backs on technology and set up tech-free communities outside the cities. Some of these communities are religious, some are survivalist, some are neither. Meanwhile, those who remain in the cities, hold on to their tech tighter than ever and some even fight to have connected neural implants made legal again.

In my previous book, The Subjugate, I explore the divisions created in this near-future society. Firstly, the division between those for and against neural implant technology (and technology at large). Secondly, the divide between saint and sinner; between organized religion and the penal system – and the places where these two worlds of control overlap. In this universe, Salvi investigates the murder of a young woman in a religious tech-pullaway community, Bountiful, which soon turns into a series of murders and the hunt for an escalating serial killer. The case is complicated, however, by a nearby high-tech prison, the Solme Complex, which legally uses neural implants to reform its violent criminals and then set them free in the religious community to serve and repent. But now women are winding up dead. So just who is responsible? Are these criminals truly cured?

The main idea in this book, which carries through into The Sensation, is on the use of neural implants to control people. In the case of The Subjugate, it’s to ‘cure’ violent criminals and stop them from reoffending. Essentially a tracking bracelet for the brain, the neural implants, attached to an external device worn on the skull, known as a ‘halo’, are used to analyze electrical activity in the areas of the brain that control such things as anger, violence and sexual arousal. When activity in these parts of the brain begin to spike, the halos act as a warning system – coding blue – which allows those around the offender to take the necessary measures before they can reoffend. And in a worst-case scenario, the implants can be used to subdue the offender. Between this ‘alarm’ system, chemical castration, and a healthy dose of religious repentance, these criminals should be tightly controlled, right?

I’ve always been fascinated with the ‘why’ of violent criminals, and a lot of research indicates a prevalence of neurological disorders that cause them to act the way they do (though one can’t ignore sociological or economic issues either). So, I explore the big idea of using this technology to possibly ‘cure’ violent criminals, but I also explore whether this cure, which essentially uses violence and oppression to cure violence and oppression, is the right answer.

And this same idea in threaded through into The Sensation as well. Though this time, I flip the idea on its head. Here the focus shifts back to the city (San Francisco) and a new drug-tech experience that has hit the streets, resulting in an epidemic of violence and a spiraling body count. I pose the question – if we can use neural implants to deaden the areas of the brain that control anger, violence and sexual arousal, what would happen if we used neural implants to intentionally heighten these areas? Could this be the ecstasy and methamphetamine use of the future, where the drugs are used in conjunction with neural implants that stimulate these areas of the brain to maximize their effects? And what would be the result? Some would use it purely for pleasure, yes; a drug-tech party experience that would blow everything that came before it out of the water. But in the wrong hands, without a doubt, some people would use it to control others in ways that could be incredibly detrimental to society.

And what would happen if those seeking to control others with this technology had a lot of money and power behind them? Would they become an unstoppable force? Neural implants could be used to stop killers, but they could also be used to create them too…

So, these are the big ideas behind the Salvation series: the good, the bad and the ugly of our relationship with technology, and the desire for control – those who seek control over others, those who submit to it, and those who fight against it.

← Once Again, My Annual Unsolicited Appreciation Post, Regarding WordPress
Today In “I’m Occasionally Reminded I Live the Life of a Hermit, Even Without COVID As an Excuse” →