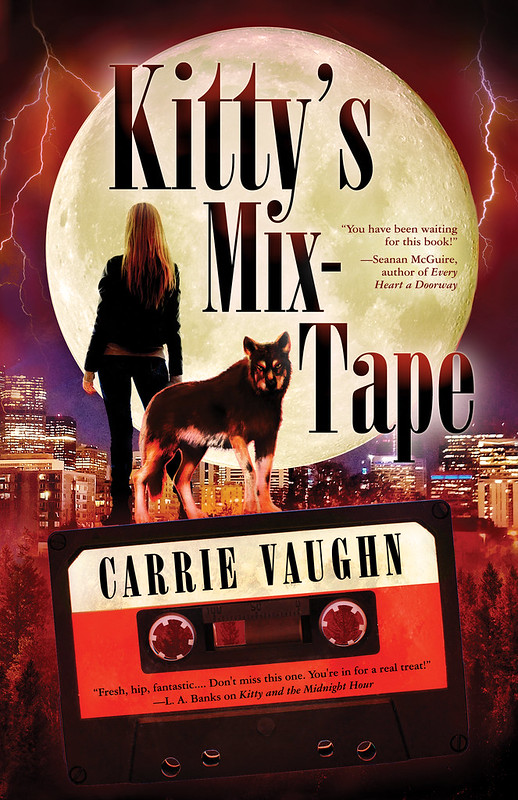 When the main character is away, the side characters and antagonists will play! Ever wonder what goes on behind the scenes in a novel? Read on to hear about Carrie Vaughn’s newest book, Kitty’s Mix-Tape and see what lies beyond the first-person perspective.

Sometimes a big idea is the culmination of a lot of other ideas. Sometimes, it happens toward the end of a process rather than at the start.

I wrapped up my series of novels about a werewolf named Kitty five years ago. . .but I had some loose ends. A handful of short stories connected to the series that hadn’t yet been collected anywhere, some crazy rough drafts that needed finishing. . .  I wanted to pull them all together and get them out in the world.

Collecting a decade’s worth of material is a chance to reflect on characters and a world I’ve lived with for quite a long time now (the first Kitty short story appeared in Weird Tales in 2001). How did I do? What did I miss? Would I change anything? Is there anything left to mine?

Heck, there’s always something left to mine! These are ideas, not molybdenum. They propagate. Short stories are the perfect form in which to explore maybe not big earth-shattering plots. But ideas. Weird ideas that don’t fit in a novel outline, that might not work stretched out over three hundred pages but might pack a punch at 30 pages. For example:  What happens when a werewolf goes to her 10 year high school reunion? I don’t know, let’s find out!

The novels were all written in first person point of view. First person is great for getting inside a protagonist’s mind, for intimately sharing their perspective, experiences, and emotional journey. It’s popular with many readers because it’s so immersive. But it has one big drawback:  you can only tell the reader what the main character knows. Their knowledge is limited to her knowledge. And it turns out a lot of Kitty’s friends—and enemies—weren’t very forthcoming with their own secrets and stories. Kitty kept asking and they kept not talking.

But I wanted to know what they were all about. Many of the short stories I wrote set in the Kitty universe are the back stories of other characters. (Rick the vampire needed his own whole collection, The Immortal Conquistador, which came out earlier this year.) What do these people do when Kitty isn’t around? A lot, it turns out. Not to mention the other random questions that come along. Like, it turns out if you’re writing a long-running urban fantasy series, and to relax from that you obsessively watch lush adaptations of Jane Austen novels because they’re the opposite of urban fantasy, eventually you begin to ask the question:  What would Regency society look like with werewolves? So yes, that topic gets covered here as well.

These are the Bonus Features. The Easter Eggs. I hope my long-time readers will enjoy these glimpses into other corners of Kitty’s world. I hope that through them, new readers will get a fine introduction to my series. Starting a fourteen-novel series is sometimes a big ask. But a short story? An appetizer? A taste? That’s easy, and new readers might just like it enough to ask for more.

So, that’s my Big Idea: short stories are gold. They’re my R&D department, my container garden where I can work on ideas that maybe don’t fit anywhere else. If I want to cut loose and shake off some cobwebs, run a sprint and not a marathon. . . I write short stories. And for readers, they’re a sample tray, a tasting menu, those delightful bites carried around by elegant servers at a high-end party. Or at least, I like to think so.

← Today In “I’m Occasionally Reminded I Live the Life of a Hermit, Even Without COVID As an Excuse”
Something To Listen To This Fine Friday →