How Jack Skellington Is the World’s Most Lovable Problematic Skeleton 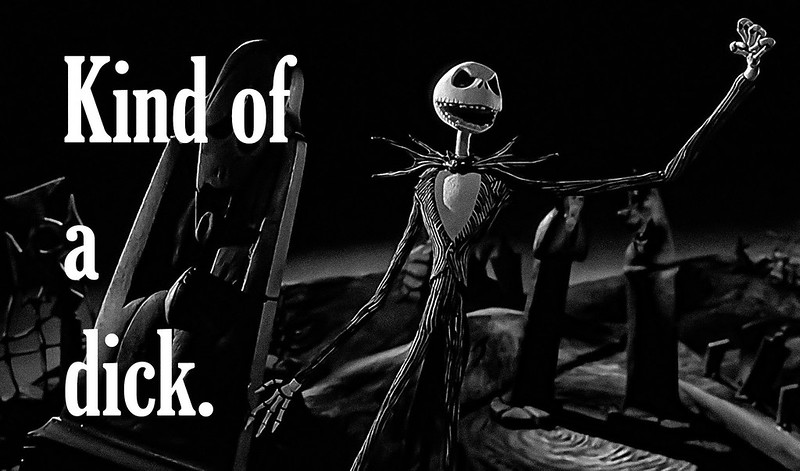 It’s that time of year again when The Nightmare Before Christmas is finally socially acceptable to watch, and thankfully it will remain in season until Christmas, because it is a wonderful film that doubles as both a Halloween and a Christmas movie. Though if you’re anything like me, you watch it far more often than just around the holidays.

You may remember I did a post about The Nightmare Before Christmas back in 2018. However, that post was only to express my adoration of the movie and tell you all it was my favorite. So, with the knowledge that it’s my favorite, let’s explore why my favorite character in my favorite movie of all time is actually kind of dick. And of course, spoiler warning (but it’s been almost thirty years since it came out, do you really need a spoiler warning after like, ten?).

Let’s talk about the fact that throughout the movie, it’s made very clear that Sally loves ol’ Bone Daddy. And she loves his presentation to the town over Christmas! That is, right until he swings back into Pumpkin King mode and describes Santa Claus, or Sandy Claws, as the monstrous ruler of Christmas Land. You can see the admiration and wonder on her face be replaced by a disturbed look.

So when the town starts getting ready for Christmas, Sally has some concerns, and tries to talk to Jack about them, but the boney biatch doesn’t listen. She tries to warn him of her vision, but he’s too obsessed over giving her a task to make his suit. He dismisses her worries about his “grand” ideas and then talks over her the entire time, until he basically says “okay I’ve given you your task now leave and get to it” without taking the time to hear her out. He never asks, “why do you think this?” or “what makes you feel this way?” He’s just so adamant about what he wants that he doesn’t give her the time of day.

I’m not sure about etiquette in Halloween Town, but Jack literally had three children kidnap someone. Verbatim, just straight up snatch and throw him into a trash bag. That’s pretty messed up! Spooky skeleton or not, you can’t just nab someone (even the music for that scene is called “Nabbed“). But, Jack feels literally no remorse about it, and you can tell by the way he steals Santa’s hat right off his head before the kids shove him back into the bag after presenting him to Jack.

It’s only after he ruins Christmas, gets blown out of the sky, and saves Santa and Sally that you can tell he feels bad. Jack apologetically hands Santa’s hat back to him; Santa yanks that hat out of Jack’s hands, then reprimands him for not listening to Sally.

(Also why do the kids just get off scot-free even though if they hadn’t given Santa to Oogie Boogie none of that would’ve been an issue? Jack specifically said to “leave that no good Oogie Boogie out of this!” But whatever, this isn’t about the kids, and their song about kidnapping Santa was fantastic, so I’ll let it slide.) 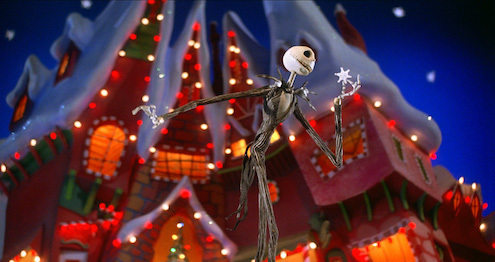 So, obviously, the big glaring problem with Jack and what makes him such a dick is that he tried to take over an entire other holiday, simply because he was bored and discontented with his life, and he felt he could, and even should, as seen in the quote from the song “Jack’s Obsession,” “And why should they have all the fun? It should belong to anyone. Not anyone, in fact, but me!”

It started out with a child-like wonder, and then grew into an admiration and love of everything Christmas Land had to offer. He loved the colors, the gifts, the decorations, the tree, everything about it. And then he tried to take it, and do it all himself, and just erase Santa out of the picture entirely and make Christmas his. And that’s what we call appropriation.

Being the ruler of one holiday wasn’t enough for ol’ Jack, the selfish skeleton wanted another one, but still wanted to keep his, too. That’s like the worst part, it wasn’t even a trade, he didn’t offer Santa Halloween, he just took Christmas and kept his own holiday on top of that. That’s a dick move.

Of course, by the end, Jack realizes his mistake and feels bad, and defeats Oogie Boogie and apologizes to Sally and everything, so he’s not a total dick. He was just misguided. At least that’s what I tell myself so I can still love Jack and The Nightmare Before Christmas as a whole.

Let me know in the comments if you think Jack was a total ass (and that Sally deserved better), or if Jack is just a lovable scamp, or somewhere in the middle. And have a great day!