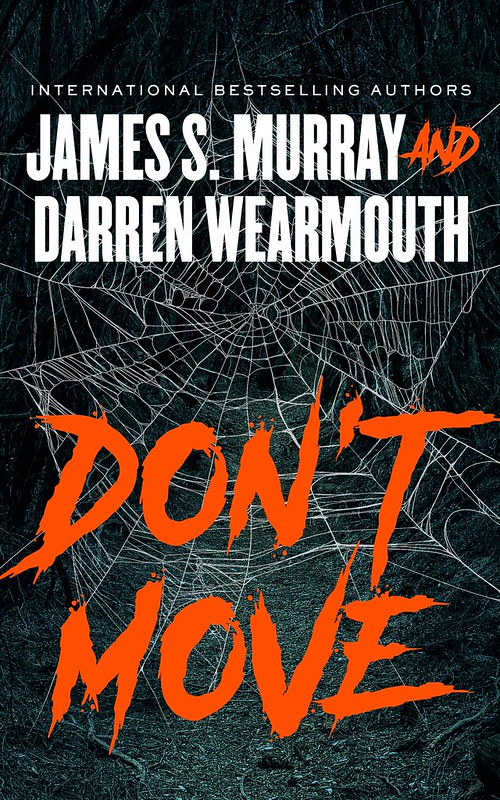 Have you ever felt the crippling anxiety of being lost? How about the feeling of being watched? Or both at the same time? Author James S. Murray (writing with Darren Wearmouth) explores this fear in his Big Idea for his new novel, Don’t Move.

I’ve only been lost in the woods once. It happened recently, in the fall of last year.

My wife Melyssa and I had just moved from an apartment in the city to a quiet house in Princeton, NJ. As a lifelong New Yorker, I felt like I’d teleported to another dimension, surrounded by a natural setting that seemed light years away from the chaotic hustle and bustle of the city.

We suddenly had this big new backyard with grass and songbirds and trees: the kind of things city dwellers only dream about. Most appreciative was our fluffy 1-year old puppy Penny, who despite only being 10 pounds, made herself at home in this new wild kingdom.

After the move, Melyssa and I were eager to explore the trails and hiking paths in the area, many of which are steeped in history. Miles of trails important to the Revolutionary War zigzag around the back roads of Princeton. We were determined to hike them all.

One cool October evening, Melyssa was finishing up some work in the house, so I decided to pack up the puppy and take her for a walk along one of the older trails. Just the two of us. I parked the car near a trailhead by the Princeton Battleground, a spot where George Washington and his soldiers made a valiant stand against British forces in the late 18th century.

It was serene. The sun had just dipped below the tree line, casting long sideways shadows across the forest floor. Penny and I walked for a while, and though I like to consider myself good with directions, I knew how easy it could be to get lost. One wrong turn and the whole forest could transform into a maze.

Eventually, we got deep enough into the trail where I figured there wouldn’t be other people or dogs around, so I let Penny off the leash so she could sprint and get some of her energy out. We must’ve only been about a mile from our car, but night was beginning to fall. The shadows along the ground were beginning to creep up and turn the tree silhouettes from the brown color of bark to black. Penny was just about out of breath. I figured a couple more minutes of walking and then we’d turn back.

But then I heard a noise.

I stopped dead in my tracks. Something rustled a few yards in front of us on the trail.

My mind raced. A bear? A murderer? The vengeful ghost of a fallen soldier?

It was a squirrel. Penny saw it before I did and within an instant, her instincts took over. She howled with ferocity as her little legs darted off the path in front of me, weaving in and out of the low brush. The squirrel took to the tree tops, shaking the canopy of leaves as it tried to outrun the barking fur ball chasing it from below. It all happened so fast.

And then, in an instant, I was alone.

At this point, the sun had sunk below the horizon. October nights get dark quickly, so it wasn’t long until the buzzing of insects filled the air. All of sudden, the trees felt like they were closing in around me. I pulled out a flashlight and trekked forward in the direction where Penny had run off. I called out her name while trying to avoid tripping on any of the rocks or vines that dotted the overgrown brush.

My imagination started running wild. The massive oak trees and pines that lined the path were hundreds of years old. It made me wonder. What other ancient creatures could be dwelling in these woods? Watching me at this very moment? The thought chilled me to the bone.

Just as the fear was setting in, a familiar jingling sound carried through the air. It was the bell on Penny’s collar. I focused my flashlight on the noise and spotted her thirty yards behind me. She was circling the base of a tree, trying with all her might to will the squirrel down from its perch. I breathed a massive sigh of relief and scooped her up into my arms.

The walk back to the car turned into more of a jog, and eventually, into a run. I was ready to get out of there. Whatever creatures I had imagined in my mind, it felt like all of them were after me. And considering I was armed with only a flashlight and a Shih Tzu puppy, I didn’t stand much of a chance.

Each night, when the sun goes down, the woods transform from a place of relaxation into a place of the unknown. I think that’s what makes it so scary as a setting. We just don’t know what’s out there.

So what happens when a church group from the Bronx ends up stranded in an untouched canyon inhabited by a prehistoric arachnid with an unquenchable thirst for blood?

Don’t Move is all about that idea of survival. Megan Forrester has just lost her family in a horrific tragedy that haunts her every waking moment. She sets out on a camping trip that was meant to be a turning point for her. But just like in my experience, her venture into the outdoors takes a turn for the worse when she realizes that she’s up against a creature that has survived for thousands of years by defying evolution at every turn.

And that’s the big idea. When life has seemingly taken everything from you, how do you go on? How do you pull out the will to survive when it seems fate is trying to take you down? Some of us use sheer grit and determination. And some of us use Penny.

← A Bit of Disclosure, Re: Sneak Previews and Special Events
How Jack Skellington Is the World’s Most Lovable Problematic Skeleton →