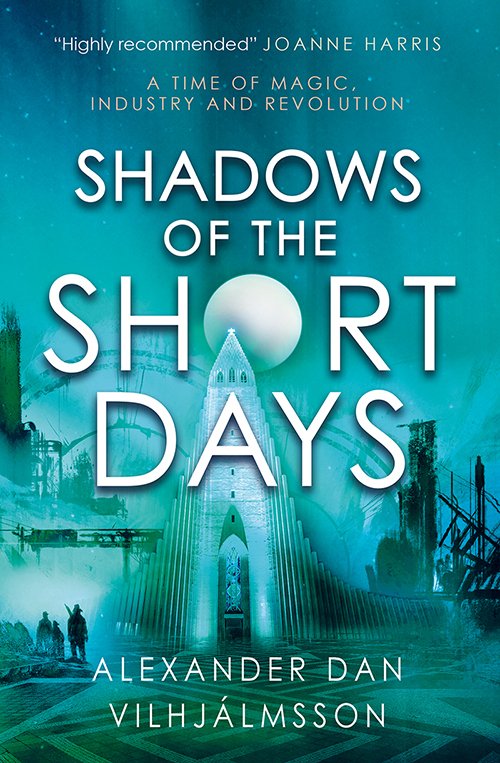 If you’ve ever tried to learn another language, or grew up bilingual (or tri or quad), you know that there are some words in each language that just simply can’t be translated. Author Alexander Dan Vilhjálmsson experiences this dilemma in the translation of his novel, Shadows of the Short Days. Read on to see how this Icelandic author keeps each word meaning exactly what it’s supposed to.

I never intended to translate my own book. The way it happened felt almost as if by accident.

I self-published a fantasy novel called Hrímland in 2014. I was exhausted after the process, but soon after I decided to try out translating it. Gollancz had opened their submissions for a limited time, and I used that for motivation.

It was just supposed to be an experiment to see how on earth I would manage to translate this work. I never imagined it would go anywhere. That book ended up becoming Shadows of the Short Days.

See, I knew this was the kind of book where I couldn’t just hand it off to a translator and get a good result without massive interference from myself. I wanted to find out how I could do it, and perhaps in doing so learn something new about how I wrote in English.

Writing fantasy fiction naturally lends itself to a lot of worldbuilding – and that worldbuilding is done through language. In Icelandic, I had pillaged my country’s archaic vocabulary when coming up with fantastical terms in universe, also looking up old kenningar, poetical words and phrases. I turned these words into species, warrior-castes, sorcerer names. Icelandic also lends itself well to making up new words – a language with a lot of compound nouns is fun that way. So, when I looked how I would tackle the translation, I had to decide what to keep and what to translate into English.

A whole lot, according to the glossary at the end of the book.

I decided to approach the text like I was writing it anew. I suppose this is what all translators do, but being the writer meant that I could rest assured that authorial approval was on my side. I thought about the English novels I’d read and how they approached which words to make up – and which they kept in English.

First off was, of course, the magic. The world of Hrímland has two types of magic: seiður and galdur. These words are derived from Norse mythology, and Icelandic folklore by extent. In universe, they are vastly different methods of magic. Seiður draws upon a magical resource found in the world, called seiðmagn (made-up word there), and channels that through the user to reshape the world. Galdur is a spoken-word type of magic – incantations and convoluted rituals – drawing upon an incomprehensible, otherworldly force. Galdur is derived from gala, which means to sing, or sometimes howl. I wanted all of this to be there, to be felt. These words have a heavy cultural connotation to them, but technically they could be translated. Galdur could be magic, and seiður sorcery, for example.

It might be easier on the reader to translate these words, but I felt that something important would be lost in doing so. A sense of identity, of a living world. Magic and sorcery are very generic words, and I wanted this world to feel specific.

Using this as a starting point, I went on to leave several words untranslated that still had a counterpart in English. Every time I asked myself: would I make up a word for this if I was writing a fantasy novel in English? Or: Is this an important aspect of the culture depicted in the book? When the answer was yes, I let the word stand in Icelandic. So it was that marbendlar remained untranslated, despite being piscine merfolk, the náskárar were not called Corvians or ravenfolk, and hrævareldar stood as-is, despite being a will-o’-the-wisp.

Some of these things might be familiar to an English reader, so why not translate them? To an Icelandic reader, a part of what makes the book fun is seeing something familiar rendered unfamiliar. Sometimes it’s a landmark in Reykjavík transformed into a thaumaturgical power plant, or a figure from folklore twisted into a dark reflection of what they were historically. These things would be unfamiliar to most English readers, having a different cultural background, but I still wanted them to experience this feeling of the familiar made unfamiliar – the uncanny.

This approach worked fine until I had to translate a náskári speaking to a human.

In the Icelandic text, the ravenfolk speak a very strange type of Icelandic (or, well, Hrímlandic). Their corvine vocal cords can mimic human languages effectively, but they care little for the ways of land-bound species. They much prefer to speak in the rough caws of their native skramsl (which is an archaic word for a raven crowing). They speak a faux type of Old Icelandic, like something you see when reading the Sagas of the Icelanders. The Sagas took place in the 9th to 11th centuries during the settlement of Iceland, written a few centuries later. In universe, the náskárar learned the human tongue then, and have since not bothered with updating it much.

So how do you translate someone speaking fake Old Icelandic in English?

What the hell was I thinking?

I considered several options. Perhaps they should speak in old-fashioned English, or I could use translations of the Sagas as a reference point. None of it felt weird enough. The more words turned to English, the more they lost their archaic and strange way of speaking. It was a big part of what made them unique from other peoples.

This is where it becomes convenient being the author as well as the translator. I did something a bit strange. I rewrote their dialogue and kept a lot of Icelandic words in there. Like, a lot. They almost speak Icelandic half of the time, although it’s the same kind of strange, faux Old Icelandic. The fusion feels like something from another world, a different time, and the English reader gets a real sense that these bastards really are speaking the old tongue. This was a big part of why I wanted to do the translation myself. I knew I wanted to do something unorthodox with them, as with so many other parts of the world.

Even if it’s just mundane things like not translating landi as moonshine.

Get Signed/Personalized Books for the Holidays!

I'm teaming up with my local independent bookstore to get you signed/personalized books for the holiday season. All the details are here. (US only.) You buy 'em, I sign 'em!