October Is Almost Over So Make Some Seasonal Treats While You Still Can!

It may very well be pumpkin spice season, but let’s not forget it’s also apple cider season! Fewer things in life delight like a warm mug of apple cider. Well, that is, if it’s my cider you’re drinking. And it could be yours too! I’m here today to share with you a recipe for apple cider so good, you’ll never be able to drink store bought again. If you’re not ready for that level of awesomeness, do not scroll any further.

I actually got this recipe online somewhere, and I can’t remember where because it was sophomore year of high school and I have terrible memory. But I do remember that the original recipe was for “apple pie moonshine” that was basically just apple juice and vodka. So all I did was leave out the alcohol and voila! A perfect cider recipe. 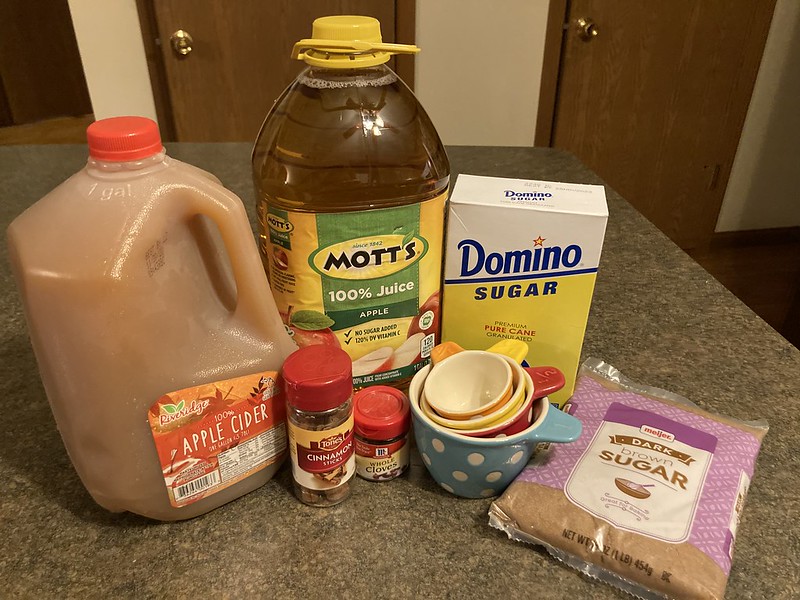 Pictured here is everything you need! As you can see, the secret ingredient to my cider is store-bought apple cider. All I do is add some sugar and spice and it turns out way better than it originally was! So, the recipe is as follows:

For the apple cider, I just grab whatever brand is at the store, it doesn’t really matter. As for the juice, again you can use any brand, I just prefer Mott’s. And for the brown sugar you can use light or dark, whatever you have on hand is fine!

So, combine the cider and juice in a big pot and heat it up, do not boil! You just want to get it warm enough so that when you add the sugars, they dissolve. After adding the sugars, reduce to a simmer and add the cinnamon and cloves, then put a lid on it and let it all come together for about an hour. Then remove the cinnamon sticks and cloves and it’s ready to be enjoyed!

I made this cider for my teachers sophomore year, and then I made it again my sophomore year of college for my dormmates, and I’m making it again this year for my family. It’s really simple and I’ve gotten a ton of positive feedback on it, so I really recommend this recipe.

If you try it out, please let me know what you think in the comments! And have a great day!

20 Comments on “October Is Almost Over So Make Some Seasonal Treats While You Still Can!”