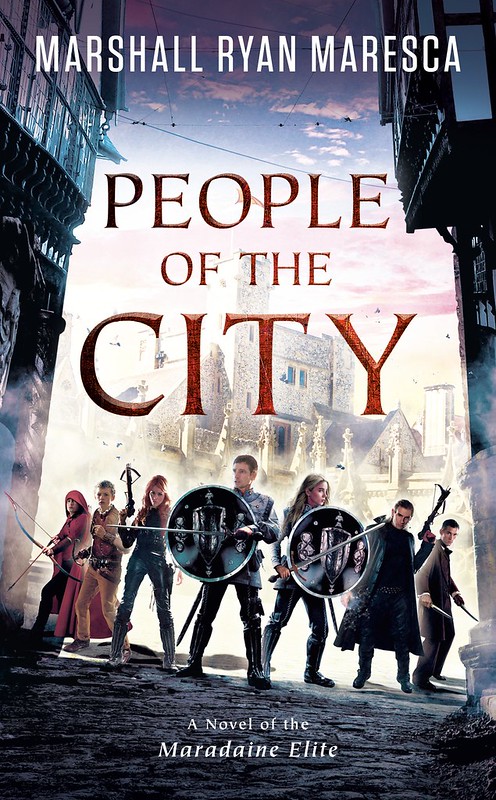 In Marshall Ryan Maresca’s newest novel, People of the City, seven heroes come together for an Avengers-style ultimate team up. Who are these heroes, and how does their chemistry make it all work? Read on.

Five years ago, when my debut novel The Thorn of Dentonhill was released, it was the first step in a larger, far more ambitious plan. A plan that was, frankly, more than a little crazy. But like all crazy plans, once it took root in my brain, I couldn’t let it go.

“There was an idea.  The idea was to bring together a group of remarkable people to see if they could become something more.”

You’ve heard this idea before, of course.  Regardless of how you phrase it— though the Nick Fury phrasing does resonate with me— it’s an idea we keep coming back to, largely because as long as we’ve had characters that occupy the same world, we want them to meet.

We love a team-up.

Let’s back up a bit.

Many years ago, I started outlining a vision for an epic fantasy.  Because, of course, I was thinking in terms of the grand epic.  A large cast of characters, with a different skills and backgrounds, who come together for a goal of the common good.  But, regardless of why they come together, the key element is they come together.

When I started to work out who each of these champions were, they each wanted their own journeys, and those were not coming together quickly or neatly.

Then the obvious answer jumped out at me: let it unravel.  Instead of trying to force the plot threads to weave together from the beginning, I realized I could explore each one of them on their own. I could make each one its own series.

From that seed, I cultivated the concepts and casts of characters that grew into the four series set in Maradaine, starting each with The Thorn of Dentonhill, A Murder of Mages, The Holver Alley Crew and The Way Of The Shield, respectively.  Four fantasy series, blending the genre with superhero narratives, police procedurals, heist stories and political thrillers.  With each of those series, I put my champions in place.  And, hopefully, got readers to fall in love with them.

Because, for any Big Hero Team Up to work, you need to love the characters involved.  You need to be invested in not just them and their stories, but the very idea of how cool it’s gonna be when they meet.  You want to build up to that moment where they’re all finally going to be in the same place and think, it’s happening!

So, who are these heroes?

First, from The Thorn of Dentonhill and following novels, we have Veranix Calbert, aka The Thorn.  He’s a magic student at the University of Maradaine, and also a vigilante fighting his personal war against the drug cartel led by Willem Fenmere.  When he thinks he can help someone, he’s going to jump into a situation with his whole heart and no plan.

Next, from A Murder of Mages, there are Inspectors Satrine Rainey and Minox Welling.  Satrine is a former street-rat, former spy and a working mother, who found her way into the constabulary after her husband was attacked and left for dead.  Minox is an untrained, uncircled mage from a large constabulary family, who uses his knowledge and skills to serve as an inspector, even though it means being hated and ostracized by circled mages.  They’re both serious, professional, and dedicated to having each other’s backs.

Third, coming from The Holver Alley Crew: Asti and Verci Rynax.  Asti was a spy in Druth Intelligence, but on one mission he was betrayed, captured and psychically tortured, leaving him with a shattered, damaged mind, and even though he returned home for a quiet life, the quiet life was not there for him.  His brother, Verci, a former thief and trapmaster, was about to open a gadget and tinkerer shop. The two of them were going to lead a simple, straight life on the right side of the law.  But then a fire destroyed everything. They are fiercely loyal to each other and the people in their run-down neighborhood, ready to do whatever they can to keep it safe, no matter what it might take.

Finally, from Way of the Shield, there is Dayne Heldrin, the pacifist member of the Tarian Order, trained in defensive fighting arts and passionate advocate for the civics that govern the city and nation.  Dayne’s closest ally is his friend and mentee, Jerinne Fendall, an initiate in the Order who makes up in energy what she lacks in training.  Dayne believes that violence should only be the last option, but will always fight to save every life he can. Jerinne is finding her own path, trying to face down her fear of failure, and pushing herself to meet the ideals she has set for herself.

But how can you bring together a rooftop-skulking magic vigilante, a pair of law enforcement officers, a team of thieving brothers and two members of an ancient warrior order?  How can you bring the plots of four different series together into one novel?  What kind of mad cat-and-chainsaw juggling act is that?

Throughout all four series, I’ve been seeding corruption and conspiracies, mentions of missing children, and a mysterious group called the Brotherhood. As more stories of child abductions reach our heroes, they’re each drawn in deeper, and have to confront each other, as well as the unholy threat to the city itself.

You’re probably saying, “Marshall, it sounds like I need to read eleven books before I even pick up this one.”  Strictly speaking, no: I make sure you are up to speed with what you need to know, if you want to jump right in here.  But, hey, I’m not going to tell you to not read all my books.  Frankly, I really want you to.

If for no other reason, so that moment where they come together in this book is all the more earned, all the more sweeter for you.