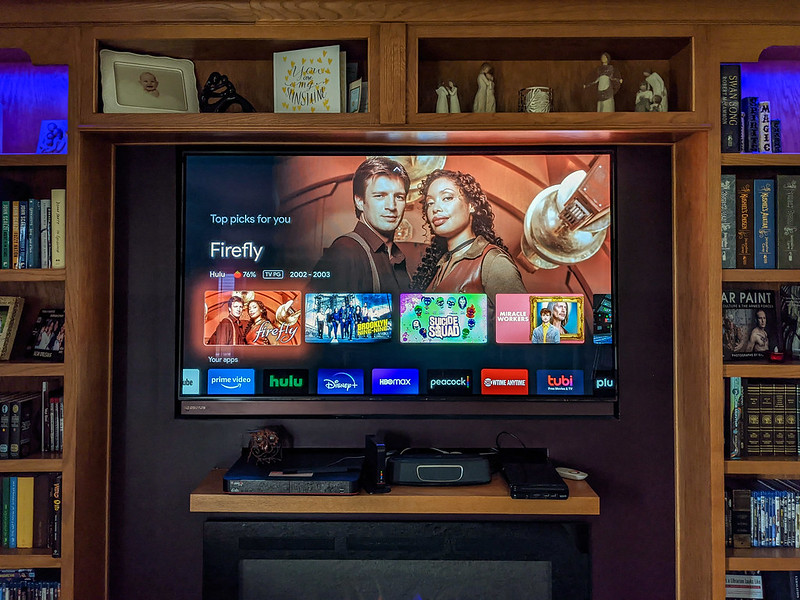 We’ve had Dish Network at the Scalzi Compound basically for as long as we’ve lived here. Back in the day cable didn’t go all the way out to where we are in rural Ohio, and then until earlier this year what internet was available to us was too slow to reliably stream all the time. We could watch Netflix on one TV, or we could use the internet for any other thing we might want to do, but we couldn’t do both at the same time. Beyond that, getting all the streaming services onto the TV was a hodgepodge affair — some had apps on the TV itself, others had to be streamed through my phone, and still others (I’m looking at you, Apple TV+), I had to stream off a friggin’ Web page because there was no app for an Android phone, because, apparently, fuck you, that’s why. So all told it was easier to keep Dish Network for its ease of use, breadth of content, and because my Internet sucked.

In the present, however, two things have happened: One, my internet speeds have finally been upgraded enough that we can actually stream to more than one TV (in 4k, even!) and still have bandwidth for checking email. Two, Google released its “Chromecast with Google TV” dongle, which I have bought and installed on my television. And now, suddenly, dropping Dish Network is actually viable idea for us.

It’s not Dish Network’s fault, really (well, it kinda is, Dish Network gets into carriage fee fights all the time so you never know what channels will just suddenly up and disappear; we haven’t had HBO through Dish for more than a year now). It’s doing the thing it does, offering up a ridiculous number of channels, of which we watch about five. But the fact is like many people, we’ve pretty much switched over to the whole streaming television lifestyle. Much of the most interesting television is available via streaming, and it’s there when we want to watch it.

And — importantly for me — the new Chromecast does a very solid job of putting all the streaming services I subscribe to (except Apple TV+, because, once again, fuck you, that’s why) into one coherent accessibility and viewing experience. I don’t have to hunt around for the streaming app or remember whether it’s on the TV or the phone, because they’re all natively on the Chromecast (if there’s an Android streaming app for your service, it’s on the dongle). You can tool around the various services by using either an included remote or (in my case) the remote that comes with the TV; no streaming from a phone or computer required, although that capability still exists. This is important because previous editions of the Chromecast needed the phone or computer to cast from, which was not great if, say, I wasn’t at home and someone wanted to stream something from an app that lived on my Pixel. The Chromecast can stream in 4k with Dolby sound and HDR, so everything looks good — as good as it will look on satellite, anyway.

The problem for Dish is that most of their content providers are now beginning to have their own streaming services, so even the five channels we habitually watch are largely replicated at this point. The new Chromecast, has largely made navigating the streaming services as easy as navigating Dish Network was (easier, actually, since Dish hasn’t really updated its user interface since the early aughts). So, sooner or later the actual economic question will come into play, which is: Why are we paying for 300 channels we don’t watch, and replicated content on the five channels that we do?

(Also, and related: I would be personally deeply pleased not to have another penny of mine sent to Fox News; currently about $1.50 of my monthly bill goes there. Suck it, Rupert Murdoch. Less militantly, I don’t watch any sports channels and vaguely resent that they constitute the single largest percentage of my Dish Network bill, in terms of programming.)

I suspect that at the very least, we’ll soon be downgrading the Dish package we do take — or alternately, just subscribing to Sling, which is Dish’s streaming service. Even Dish knows which way the wind is blowing. Ditching Dish was not a palatable prospect before, but now it is, and all because of one little dongle (and, uh, internet that doesn’t suck). I realize that “cord-cutting” is not exactly a new phenomenon, but, living in rural Ohio as I do, it is new to me. Progress: It will have its winners and losers.

← Foliage Break
Learn More About Me: My Favorite Song →

38 Comments on “Dish Network and the New Google Chromecast”