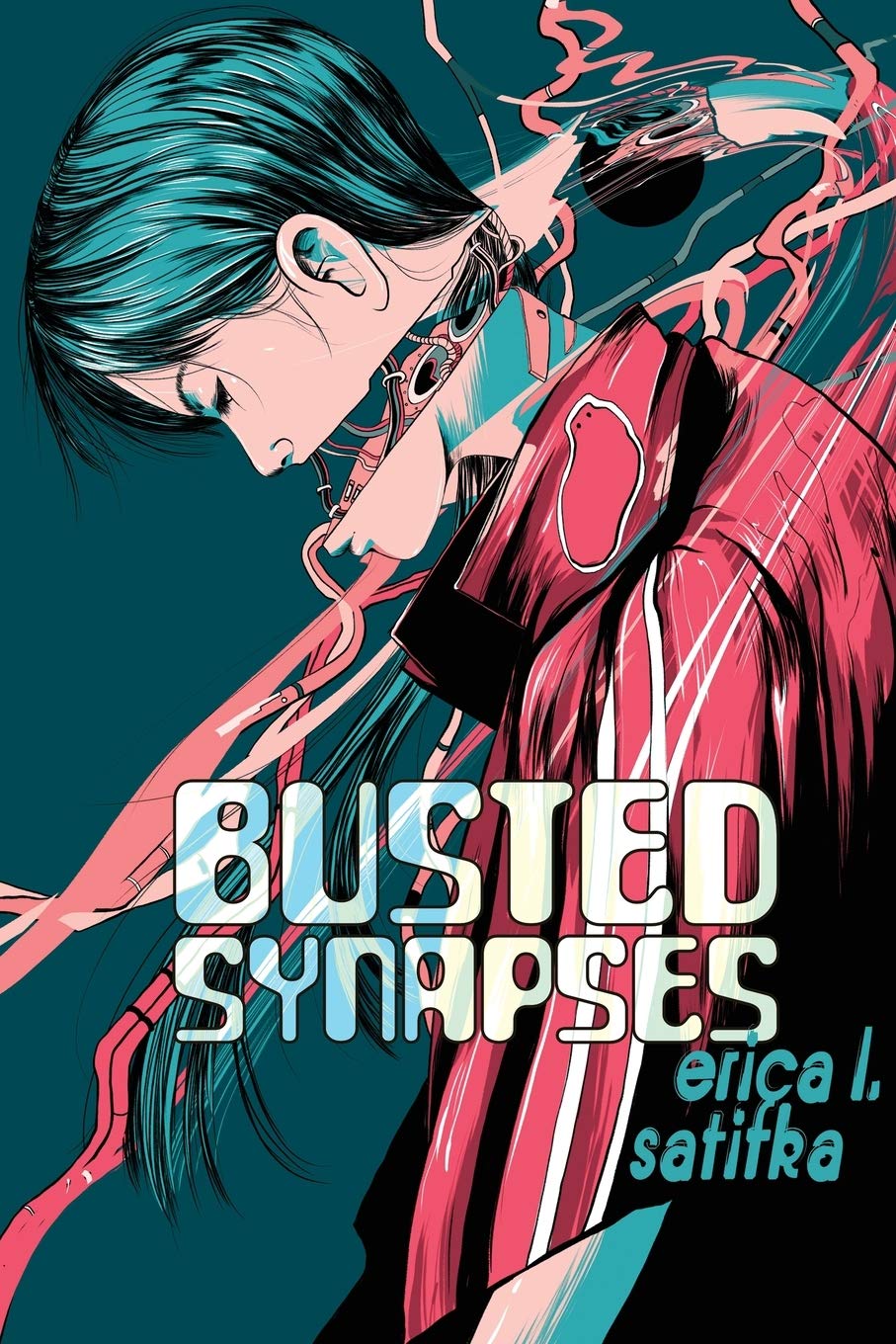 What does a futuristic, high-tech world look like for those who can’t afford said high-tech? When cities start to look like Blade Runner 2049, what do the rural areas and boondocks look like? In Erica L. Satifka’s newest novel, Busted Synapses, she explores a kind of dystopian future that perhaps isn’t so far off from where we are now.

There was a popular tweet a few years ago that stated “If you’re under sixty years old, you weren’t promised a flying car. You were promised an oppressive cyberpunk dystopia. Here you go.” As a congenitally pessimistic person I’ve always been drawn to cyberpunk, both for the aesthetic and because no other type of science fiction seemed to really describe what I thought life was going to be like in the future (i.e. bad). Cyberpunk also tends to focus on more everyday types of characters as opposed to starship captains and scientists. It’s these types of characters, and this type of bleak future, that are the basis of my novella Busted Synapses, a cyberpunk novel that takes place near where I grew up in small-town Appalachia.

Most cyberpunk stories take place in cities, of course, the type of cities where twenty-foot-tall televisions invite you to the off-world colonies. But in Busted Synapses, cities are for the wealthy and powerful only, thanks to a gentrification program centrally planned and carried out by the fictional Solfind Corporation. Everybody else is priced out to the crumbling suburbs and rural towns that aren’t worth Solfind’s investment, towns like Wheeling, West Virginia. In my take on the very near future, people are only worth what value they can give back to the billionaires who have effective control of the government and all other arenas of power. (This is a purely fictional situation, of course. We’d never push eight million Americans into poverty and leave millions of others unable to pay rent to prop up the stock market. That’s sheer fantasy.)

The “hero” of the story, if you can call her that, is Jess, a recent college graduate who tried to make it in the new “development zone” of Pittsburgh but was forced out, leaving her resentful and disgusted by the Wheeling residents (including her own family) she now lives among. Her unhappy life turns upside down when an android – dubbed a “New Woman” by Solfind – who was designed to drive humans from the labor market shows up in town. While Alicia the New Woman is much more personable than the automation that’s disrupting our society, the frustration of being a human in a world that’s rapidly losing the need for humans is all too real.

And of course, people need an escape hatch to deal with all this dystopia. In Busted Synapses one of those escape hatches is Trancium, an analogue to the opioid and meth epidemics that have devastated rural communities. The third focal character, Dale, has a foot in this underground economy, though he at least has the decency to feel a little bad about it. Many other people, like Jess’s own mother, find their escape in never-ending feeds that cascade their users in a flood of vapid Solfind-approved infotainment. In both cases, the goal of these distractions is to keep citizens narcotized and obedient, and prevent them from seeing what the Solfind oligarchs have really done to their society.

Some people might say that you can’t have cyberpunk without an urban setting, and it is true that Busted Synapses looks superficially more like our world than Neuromancer looked like 1980s Japan. But the spirit of alienation, techno-pessimism, and anti-corporatism are still there. If walled-off (either physically or economically) cities are our future, then the real revolutionaries have to be located outside of them, in the places where the neo-aristocrats of the very near future fear to tread. Bruce Sterling once called cyberpunk a combination of low life and high tech, and in this light Busted Synapses is about a gang of low lives dealing with the highest tech that capitalism lets trickle down to them, which isn’t much.

Tonight, an election will be decided, but regardless of who the victor turns out to be it’s hard to imagine that the many problems caused by extreme economic inequality and corporation-backed gentrification will vanish within the next few years. The causes of the opioid crisis and other “deaths of despair” will still be with us. While I hope it entertains you, I also hope Busted Synapses makes you stop and think about where we are headed. Jess’s world may not be inevitable if we act now to stop it.

← Election Eve Sunset
It Is a Good Day to Vote →