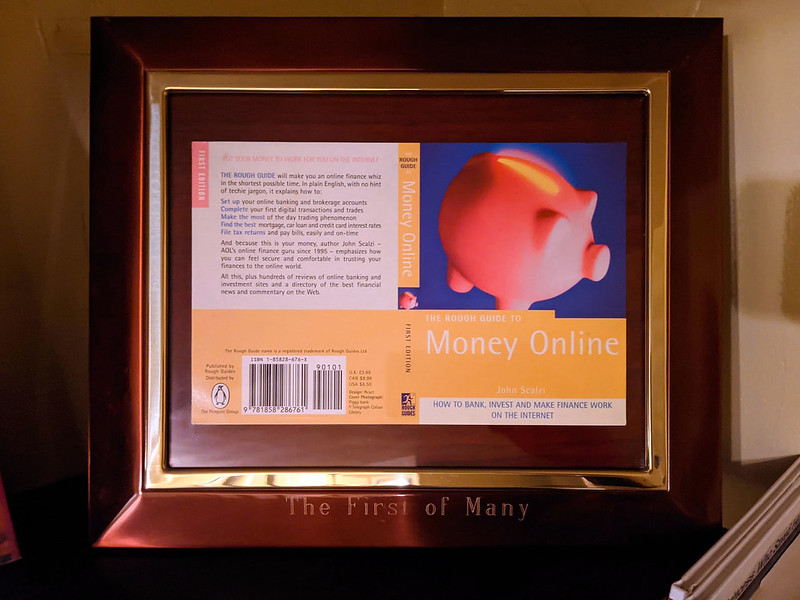 Today’s a special occasion for me: Twenty years ago today, I became an author. Not a writer — I had been writing professionally for more than a decade at that point, and had been writing non-professionally even before then — but an author, someone who had written a book and then had that book put out into the world. Today, twenty years ago, The Rough Guide to Money Online came out into the world.

But wait, some of you say. Wasn’t Old Man’s War your debut? It was my debut novel, yes. But a quick glance at my bibliography shows that I had actually published four books before then, all non-fiction: The Rough Guide to Money Online, The Rough Guide to the Universe, and the Books of the Dumb, 1 & 2. Prior to becoming a novelist, I had quite a reasonable career as a non-fiction author going on, which has been a continuing thing as well — I have eleven non-fiction books, the most recent dating to 2018. In 2005, when Old Man’s War came out, I was often introduced as someone who was “primarily a non-fiction writer.” Which was at the time entirely true.

I’ve told the story of how I got signed to do Money Online before, so I won’t go into great detail about it now. But to briefly recap, in 1999, Rough Guides, which had great success with its Rough Guide to The Internet, wanted to publish a sequel relating to financial services online. One of the Rough Guides editor was talking to my then-agent Robert Shepard about it, and Robert said “I have just the guy for you,” and mentioned me, because at the time I was writing a financial newsletter for America Online. The Rough Guides editor said, “great, ask him,” and then Robert called me and said “I have a book lined up for you, do you want to do it?” And, well. Yes. Yes I did. 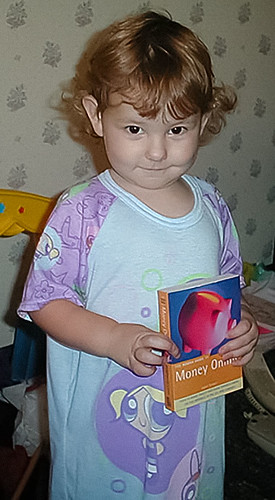 Overall the writing of the book was a fairly painless experience. I submitted an outline (a fact that will make my fiction editors bowl over in shock), we had a little back and forth about it, and once it was finalized, I mostly worked from that. The nature of the book was pretty cut and dried — lots of explaining how to sign on to financial sites on the Web, and also how to use then-common financial programs — but I was allowed to drop in some personality here and there. The only time they really gave me any pushback was when my section on day trading consisted of a single word (“DON’T”) in the largest possible type. They felt this was a tad incomplete. They weren’t wrong, and I revised to explain why and then show people how to do it if they still felt the need. But to this day I stand by my initial draft.

I turned in my manuscript in the first quarter of 2000, and my Rough Guides editors were very happy with it, and assured me that even if it sold only a tenth of what The Rough Guide to the Internet had sold, it would be a smashing success. They did a nice amount of pre-publicity, including the mailing out of promotional plastic piggy banks (I still have one) and scheduled me on a six-city book tour, which included stops at Bloomberg and CNBC. They scheduled the book for early November, on the basis that after the Election Day results came and went, there would be a bit of a news vacuum. I and my book would be perfect to fill that. Everyone involved was expecting big things from The Rough Guide to Money Online.

There were reasons for that. To begin, between me turning in the manuscript and the book’s publication, the first Internet bubble had popped, and people were losing money on the Internet left and right. No one wanted a book that told you how to put your money onto the Web, even if it was more instructional than aspirational. To continue, the 2000 US Election was not, shall we say, a cut-and-dried affair; it dragged on for a month. There was no news vacuum to fill, and in at least a couple of cases our scheduled segments on news shows were cancelled. No one had time for my book when there were hanging chads to be discussed. My first book store event — a weekday lunchtime slot at a Chicago Barnes & Noble — had one audience member, a staffer who graciously spent her lunch hour listening to me while she ate her sandwich. After two stops on the tour, Rough Guides cancelled the rest of the dates and sent me home. I could not blame them.

Rough Guides gave me an $18,000 advance for Money Online and everyone assured me that they anticipated the book earning that out in the first couple of months. It never came close to earning out; only the fact that it is now out of print keeps it from still being in the red.

How did I feel about my first book being a commercial failure? I mean, it wasn’t my favorite thing. I would have liked it to have been more of a success. But no one blamed me for it being a complete bomb. The book was good and did everything it was meant and designed to do, except sell; it just had the misfortune of being released at the worst possible time for a book with that subject matter. Sometimes you do everything right and you fail anyway. Life is like that.

The book was a commercial failure. But here’s the thing: It wasn’t a failure for me. Rough Guides, who had been pleased with the content of the book and with me as a writer who did not induce headaches for them, asked Robert and I to pitch them another book. We pitched the book that would become The Rough Guide to the Universe, and that book was a success — it went into two editions, in fact, the first and to date only book of mine to do so. That led to The Rough Guide to Sci-Fi Movies in 2005, which was also a success. Money Online, although a commercial failure, opened the door for more work as an author. It doesn’t always work that way, but in this case it did.

It was also useful for other work. At the time I was doing a lot of corporate consulting and marketing, and core clientele were financial services companies and tech companies. Money Online straddled both spheres, and being able to point to a published book that covered those topics was an advantage with clients when selling myself for their various projects. It reassured clients that I knew what I was talking about, and that I wasn’t a complete flake. I wrote a book, after all. You need an attention span for that.

But more than that, for me it represented a personal milestone. I should be clear that one may have a long, happy and profitable career as a writer and never once write a book, and many writers have done just that. Likewise, having written (and having published) a book doesn’t mean you’re a better writer than someone who hasn’t. It’s a medium, not a medal. For all that, I think that it’s accurate to say that books feel special to writers, and almost holy — they represent an achievement and to a great extent make you feel like what you’ve written has achieved some sort of permanence.

I certainly felt that way. My career up until the publication of Money Online had been primarily in newspapers and online. In a decade I had written hundreds of thousands of words, and all of them were essentially disposable, meant to be read once and recycled (in the case of the newspaper writing), or scrolled away from for the next thing (in the case of the online writing). None of it was meant to stay, held in a form you could hold, and put on a shelf, and take down and refer to anytime you wanted. 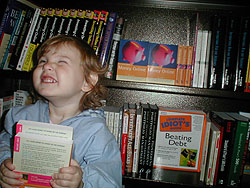 But finally I had that — I had a book. I had written it, it was real, I had been paid for it, and it went out into bookstores. I remember calling a local bookstore the weekend before the book was meant to come out, to see if they were planning to have it in stock, and they said, “Oh, we already have it out. We have lots of copies.” So we took a family trip and I got to see my very first book, in a bookstore. Multiple copies! That anyone could buy! How great was that? Answer: it was pretty great.

Twenty years has tempered my expectations on the permanence of books, I will note. Money Online itself brings that home. It was mostly off bookstore shelves in a couple of years, and the accuracy of the information inside the book began to decay almost instantly, because the Internet is not set in stone, or even in paper and ink. If you were to read the book today it would be comically inaccurate and functionally useless. Rough Guides took it out of print several years ago, along with my other books for them, when they decided to refocus on travel and ditch all the other things they had branched out into. You can still find Money Online if for some reason you are absolutely determined to have it (try eBay); the question is why you would be so determined to have it. Books, like everything else, pass out of sight. Very few books achieve cultural permanence. My very first book was not destined to be one of them.

For all that I am still excited for every new book of mine. It is never not amazing to see your book for the first time. And Money Online will always hold a special place in my heart. It’s the book that made me an author; once it was published, even if I never published another book, I could still say I wrote a book. That was satisfying in itself, and would have been enough, if that had been all there was for me.

It wasn’t. When Money Online was published, Krissy presented me with the framed cover flat for the book, and on the frame were the words “The First of Many.” She was right; twenty years on I have written 32 books, not counting books I’ve edited or anthologies I’ve contributed to, and I will get beyond 40 before all my current contractual obligations are fulfilled. That’s a lot of books.

And it all started on this date, two decades back, with that one little book. A small start. Look where it’s gotten me.

← How I Got Over Phone Anxiety
Playlist for the Day →

27 Comments on “Twenty Years an Author”