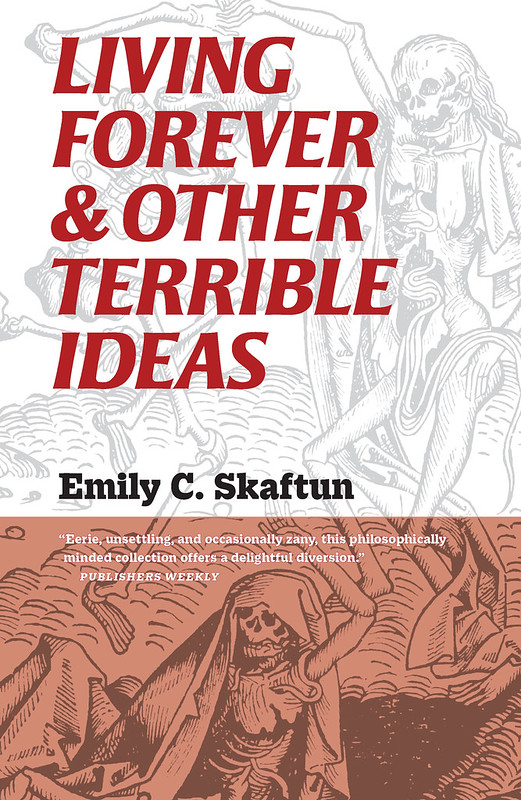 In today’s Big Idea, author Emily C. Skaftun is thinking about death… for starters. With a book title like Living Forever & Other Terrible Ideas, perhaps this is not entirely surprising.

Death! There is no bigger idea.

The theme that emerged as I was putting together my favorite stories to create my first collection—and no one is more surprised than I that a theme emerged at all!—is something like:

Death. Maybe it’s not the worst thing that could happen?

Or: Be sure to read the fine print about your life after death.

We humans take it as a given that death, you know, sucks. We’d really rather avoid it, thankyouverymuch. And it turns out that in my short fiction I’ve explored a bunch of weirdo ways to be not dead. A lot of them aren’t necessarily preferable to the null of not existing that is the only actual post-death scenario I can conceive of (sorry, religious upbringing, I never really bought into that “heaven and hell” stuff you tried to sell me).

Like, for example, what if reincarnation is real, but there isn’t much life left on the planet, so your soul gets shoved into whatever anthropomorphizable thing it can find, like a pink plastic yard flamingo or a taxidermy jackalope? And what if in that form you can’t be killed, so all you have to look forward to is an eternity of hopping around on thin metal legs in an increasingly overgrown tacky suburban neighborhood?

That would possibly suck more than being dead.

Or maybe you become a zombie! That could be kind of fun; you could check a few more must-see sites off your bucket list, nom on some still-human tourists, all without a care in the world. Except: what if you did still have all your cares, all your heartbreaks and regrets risen along with your rotting corpse from that grave in the Hollywood Hills?

Maybe you thought you could cheat death with science, and had your head frozen. Except, oops! It turns out reincarnation is A Thing on a galactic scale, and while humanity was in no hurry to unfreeze your antediluvian brain, you could have lived dozens of lives as a tentacled star drive mechanic, a hybrid organic computer, a giant feathery lizard soldier, a rumrunning space squirrel, and countless other wondrous beings. If only you’d died.

Death is the one really unavoidable thing about life (since even taxes can be cheated!), and I think it’s important to honor that.

If all you read and/or watched was fantasy and science fiction, you might think death was a temporary condition. It’s gotten to the point that I reflexively think they’ll be back, even in what seem like the most hopeless of (fictional) cases. Run through with a sword? We’ve got band-aids. There is an antidote to every poison, a cure for every disease. And in the rare cases there isn’t—well, there are robot bodies, alternate dimension selves, doppelgängers, and of course ghosts.

The first time this really burned my cheese (is that a phrase? It is now) was when I rushed out to buy a copy of Michael Crichton’s The Lost World, in hardcover for fuck’s sake, because I’d heard that Ian Malcolm was the protagonist. I’d adored both the book and movie of Jurassic Park, because, hello, I am a human being, and I maybe also had a little eensy-weeny nerd crush on Jeff Goldblum (what can I say? I was ahead of my time). In the book Jurassic Park, to which the book The Lost World was presumably the sequel, it was absolutely clear that Malcolm was dead. Not only dead, but his body left on the island when the survivors evacuated. I rudely ignored my mom at lunch to find out how he had been resurrected. “It turned out I was only mostly dead.”

After that I could put the book aside and eat my lunch.

But I did end up reading the whole thing, and not just because I’d sunk all that hardcover money into it. I read it because I loved dinosaurs, and I loved Ian Malcolm, and I wanted to spend more time with both of them. I was ultimately happy to have my favorite character back, even if his rebirth was sloppily executed. (Just think how awesome a sequel starring Ian Malcolm’s smug ghost—or clone—would have been!)

Death doesn’t have to be the end, in fiction.

But I believe there should be a cost. It’s probably there in the fine print.

The terrible thing about death, in my view, and in many of my stories, is not so much death itself. It’s the way death separates us from the people we love.

So even characters in that wild and joyful reincarnation galaxy can still find themselves lonely on an interstellar scale, their loved ones scattered across staggering distances by the whim of rebirth but their memories of them intact.

And the doomed plastic flamingos might just be okay, if they can remain a pair.

The zombie is fucked, though.

← An Unexpected Side Effect
How To Get Signed & Personalized Books From Me For the Holidays, 2020, PLUS a Very Special Short Term Deal →