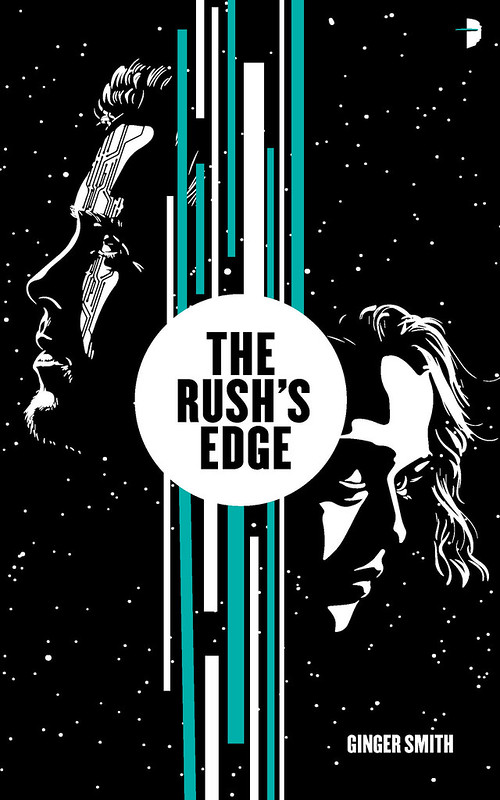 What does one do with themselves when their purpose is fulfilled? How do you adjust to a life you weren’t built for? In Ginger Smith’s newest novel, The Rush’s Edge, she explores finding meaning in a world so different from the one you’re accustomed to, and finding brotherhood along the way.

Sebastian Junger, has been a war correspondent for fifteen years. He speaks very eloquently on the brotherhood that soldiers miss when they come back to a lonely civilian world. He explains it’s more than friendship. It’s knowing that someone has your back and would give their all for you and that you would do the same for them. This sense of brotherhood between soldiers makes up one of the big ideas of The Rush’s Edge.

I didn’t realize right away that my book would tackle some of the issues that veterans face. It crept up on me and became a subplot as I added backstory and characterization to Hal and Ty, two of the main characters of the book. As time went on, I felt like a painter building up layers of light and shadow. The light was the sense of brotherhood the two former soldiers share. The shadow hinted at the darker things that the two of them, especially Hal, had undergone as a solider in the service of the Armed Forces of the Confederation of Allied Systems (the ACAS). It wasn’t until later that I realized what had inspired me.

As the daughter of a veteran, I often think about my father’s service and the lasting effects it had on his life. Like the characters in The Rush’s Edge, his life was a painted canvas of lights and darks. My father enlisted in the United States Navy during the late 1960s. His service coincided with the widening conflict in Vietnam as more and more American soldiers were being funneled into the country. One of my father’s closest friends was killed in action. His name is now etched forever on a black granite wall in Washington DC.

I am sure that his friend’s loss was painful and left deep scars on my dad’s psyche. My father did not talk much about the things he experienced in the Navy during that time, but he was able to talk to my husband, a military historian. Dad relayed the story of how he was present as the USS Forrestal came into the Philippines after a terrible shipboard fire had killed over a hundred crewmembers and wounded many more.

As I look back, I think how this must have shaped him. The light in the canvas of his life was that he was fiercely independent. He always took care of me and my brother and taught us to be hard workers. My father and I were both readers, and he taught me to love science fiction and fantasy from a young age. When I was five, he began reading The Hobbit to me every night before bed. Later on, he let me read from his own stacks of SFF paperbacks. It’s a small wonder, I suppose, that I am now a science fiction author. If he was still alive today, he’d probably be pretty proud.

But my dad’s time in the military came with a dark side too. He suffered from anxiety and alcoholism as he got older and refused to let anyone help him deal with his problems. There were just some shadows from his past that were too hard for him to shake. Now that he’s gone, the opportunity for questions has regrettably passed. But delving into the effect of military service on Hal and Ty was my way to explore the struggle veterans face after life in the armed forces.

Hal Cullen, the main character of The Rush’s Edge, is a VAT (Vanguard Assault Troops) super-soldier. He was grown in an artificial womb in a Coalition-run facility and was trained subliminally by the interface implanted in his brain. The other vat soldiers he’s served with make up the only family he’s ever known.

Vat soldiers are genetically engineered to experience the rush, a reaction to threat that allows them to think faster and fight harder than natural born soldiers. After their release from service, a vat’s drive for the rush leads them to seek out trouble that usually leads to their demise. They just don’t adjust well without the structure and camaraderie of the ACAS. Most vats turn inward as the loneliness of life on the outside eats them up. Hal’s story would have ended the same as any other vat, if not for Tyce Bernon, his commanding officer.

Vats are forced to leave the ACAS after seven years of active service. When it was time for Hal to go, Ty quit as well. He found he could no longer stomach what the military was doing to soldiers like Hal. So instead of being alone, Ty invites Hal to help him run a one-ship salvage business, recovering parts from crashed ships past the Edge’s border.

The Edge, like our own world, is a lonely place for veterans, but together, there is hope that Ty can help Hal avoid the dark fate other vats face. For these two, the bonds of brotherhood extend past soldier and commanding officer, past vat and natural-born. When I contemplated what the big idea of my book was, my mind kept returning to this sense of brotherhood they share. I can’t help but think my dad would have benefitted from having such a connection in a lonely world, and I hope that, once home, all veterans will somehow find this again.