The Sore Loser, and the Malign Loser 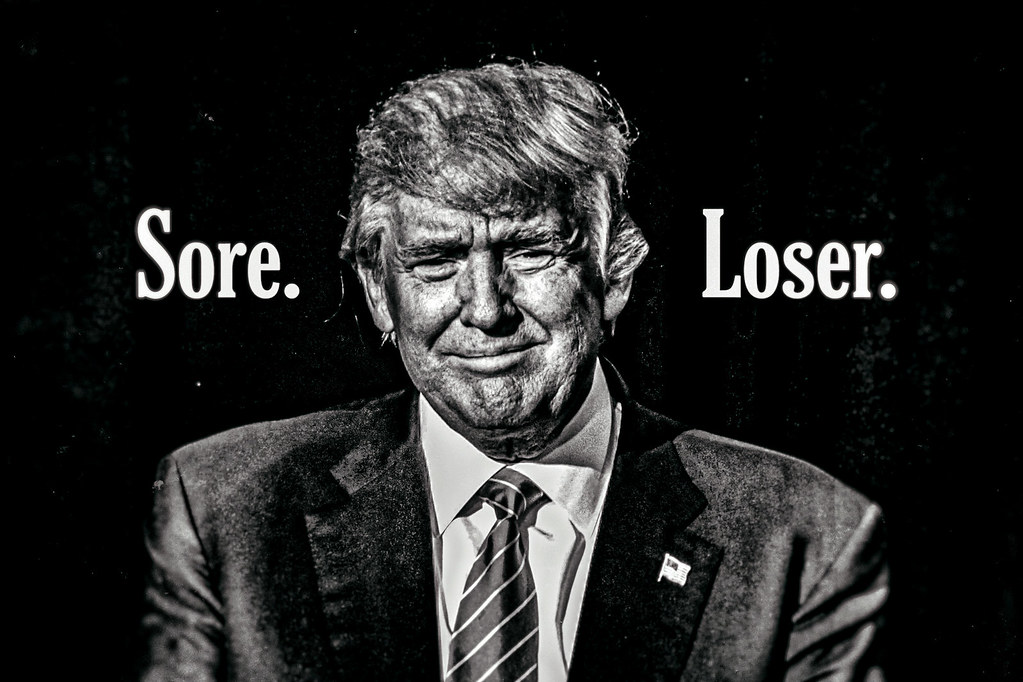 Donald Trump has lost the 2020 presidential election and has absolutely zero chance of winning it now. This is because the election has already been run, and it resulted with Joe Biden winning, with, to date, 77 million votes, 50.8 percent of the voting electorate and 290 electoral votes, with another 16 likely to come once the recount in Georgia is done. The margins by which Biden has won these states are impossible to overcome, as historically recounts change the vote totals by hundreds of votes, and Biden is up by 14,000 in the closest race of the states where numbers are being contested (that’s Georgia). The suits that the Trump campaign has filed regarding election fraud have been shot down as hearsay or because of other flaws in the filing; they are historically flimsy suits, and even the ones that aren’t affect a number of ballots that will not change the results of the election. There was no systemic or systematic electoral fraud.

The idea that the Republican legislatures in the “contested” states will rebel and name their own electors is a pipe dream, you decide which kind of pipe, and in any event the legislatures in at least some of the states have signaled they have no interest or intent to get involved. That leaves an autocoup attempt, I suppose, but given how much open contempt this president has had for the military forces in the United States, and the seriousness with which our military takes its oath, let me just suggest I don’t see that move ending up happily for Trump.

To repeat: Donald Trump has lost the 2020 presidential election, definitively and decisively. If you believe this, congratulations, you have some minimal relationship to reality as it exists in the world. If you do not believe this, either you have been trapped in a bread box at the bottom of a well for the last two weeks and are just now catching up, or you have some injury of the brain which does not allow you to process information in a reliable manner, or you simply choose to live in a fantasy world for your own, probably at this point frantic and malign, reasons. Or, alternately, you know Trump has lost the election, but you choose to pretend this fact is not real, because you are, in fact, a mendacious piece of shit.

Which brings us to President Trump and the GOP.

There is no scenario that exists in which the GOP’s “brain trust” — I use that phrase advisedly — believe that there is a path to Donald Trump winning a second term in the White House. None. They are smarter than that and they have been doing this too long. They are going along with this nonsense because, bluntly, they don’t want an angry retaliatory Donald Trump, and at this point that’s more important to them than any damage they’re doing to the country or its institutions. It’s frustrating for me to continually have my nose rubbed in the fact that the GOP literally does not give a crap about anything other than the GOP and the GOP’s interests (coddling the rich; tossing civil rights over the side to keep its white supremacist base engaged), but here we are in November 2020 and the GOP is acting absolutely to spec.

In the White House itself, I imagine everyone around Trump knows it’s over (it certainly seems that way), but there’s his ego to be salved and money to be scammed off of the president’s dimmer supporters, and at no point has Trump ever been interested or concerned in anything other than Trump. So again, this is all to spec.

(Note well that all of this elides the fact that Trump (and his family) are going to spend the next several years at least, and probably the rest of his life, fighting criminal suits and creditors, and dealing with the inevitable reveals of just how massively he sold out the country for his own interests. The Trump family has grafted (and grifted) itself onto the GOP like a parasite in order to scam money and lawyers from somewhere. I suppose the GOP will have to decide whether it wants to spend the next several years propping up a bad businessman’s debt and a bad president’s reputation. Neither of those is going to be a good deal for the party in the long run. I have some popcorn set aside for how this plays out.)

Trump lost the election. I didn’t expect him to concede; I still don’t. He’s too insecure and pathetic for that, and we all knew that going in. At this point, most of my actual ire is with the Republican party, which really has just gone over to the working principle that it only acknowledges elections that go its way, and that all other elections are illegitimate. It does this because over the years its cultivated its base to be ignorant and reactive and resistant to facts — which is why we had Trump at all.

The GOP, as it is, is a cancer of American democracy. Not because it’s conservative — there will always be conservatives, and if we must have political parties, then conservatives should have one no less than anyone else — but because it fundamentally no longer acknowledges either the necessity of American democracy or the need for an informed electorate. It wants a mob that is open to authoritarianism whenever it loses a vote.

Trump is a sore loser. But the GOP is a malign loser. We can and should blame Trump for not conceding this election and starting the transition process to the Biden administration. But even more, we should blame and condemn the GOP for supporting and encouraging a position that endangers the county, internally and around the world. It knows better, and simply doesn’t care.

88 Comments on “The Sore Loser, and the Malign Loser”