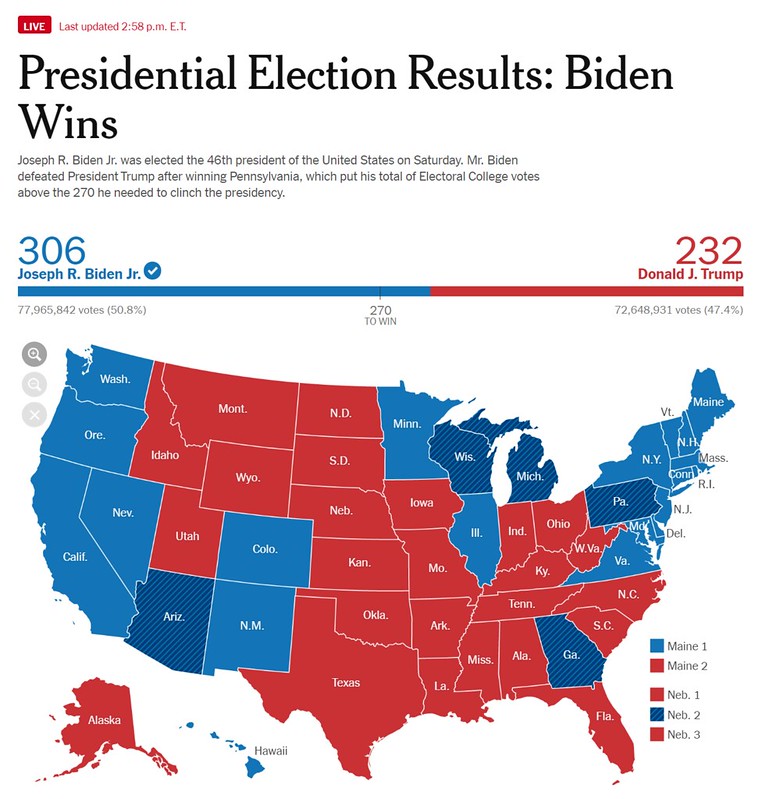 News organizations have finally called the last two uncalled states (see the New York Times graphic above), with Georgia going to Joe Biden and North Carolina going for Trump. With those last two pieces set into the election puzzle, Biden has 306 electoral votes, and Trump 232.

You may recall that in 2016, when Trump won 306 electoral votes, he termed his victory “historic” and a “landslide,” even though he lost the popular vote by a few million. I doubt Trump will call Biden’s equivalent electoral vote victory historic or a landslide, despite the fact that Biden has won, to date, roughly five million more popular votes than Trump has. Indeed Trump, like the whiny, pissy baby he is, continued not to acknowledge his “historic, landslide” loss at all. There are still some votes to be counted, and Trump has unleashed a barrage of dubious and ineffective lawsuits, but everyone who is not either delusional or a sad partisan hack recognizes that this cake is baked. It’s been baked for about a week now, and it’s well past time to start serving it up. 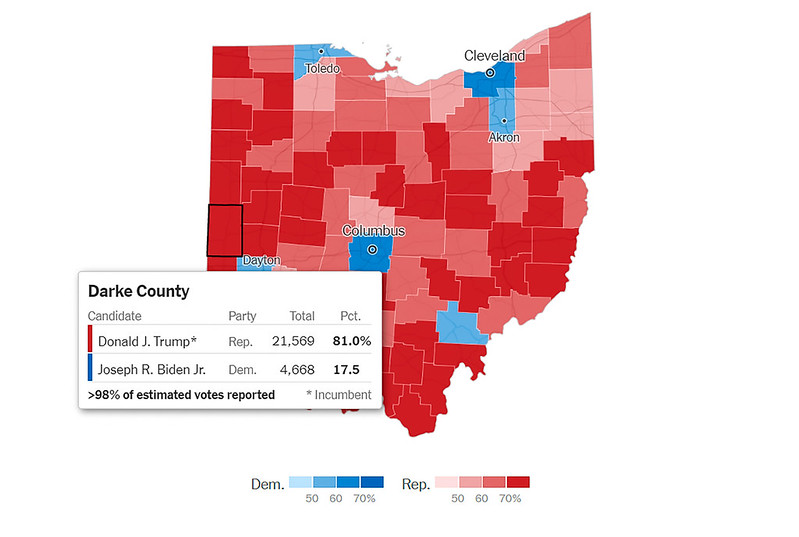 Locally, the 2020 election is notable in that Ohio, where I live, has now officially shed its status as a bellwether state; for the first time in at least half a century, I think, it went for the loser of the national election. Nor was the vote all that close; Trump ended up getting 53.3% of the Ohio vote, about eight percentage points more than Biden. This was roughly the same vote percentage gap that Trump had over Clinton in 2016 as well (although in 2016 Trump the overall vote percentage was a couple of points less). I don’t know if this means Ohio is now officially reliably red, but it certainly was reliably Trumpish.

In my own neck of the Ohio woods, Darke County, it was a blowout for Trump: 81% of the vote and just 17.5% for Biden (including my own vote). This is the highest percentage of votes that any presidential contender has gotten from the county in any election going back to 1856, the second place going to Trump in 2016, when he won just under 79% of the vote. Those couple of extra points seem to be because of higher turnout, not because of voters in Darke turning against the Democrats (well, any more than they already had). Biden got more voters in Darke than Hillary Clinton did, by a couple hundred votes, but Trump got about 1,500 more votes than he did in 2016. While I’m not thrilled with the results, I am generally happy about increased voter turnout. People should vote if they can.

I’m going to be very interested in what the trend will be for 2024. Not in Darke County — it’s been Republican for most of a century and as a 98.5% white rural county is likely to remain so — but in Ohio. Trump is making noise about running for president again in 2024, but I doubt he’ll be able to, in no small part because he just might be in prison. I am curious to see how Ohio reacts to a Republican presidential candidate who is not him. We’ll have to see.

That said, I’m not going to give it that much thought right now — that’s four years from now. Right now Ohio will have to stand there in its wrongness and be wrong. No cake for Ohio! Let’s hope it’s learned its lesson.