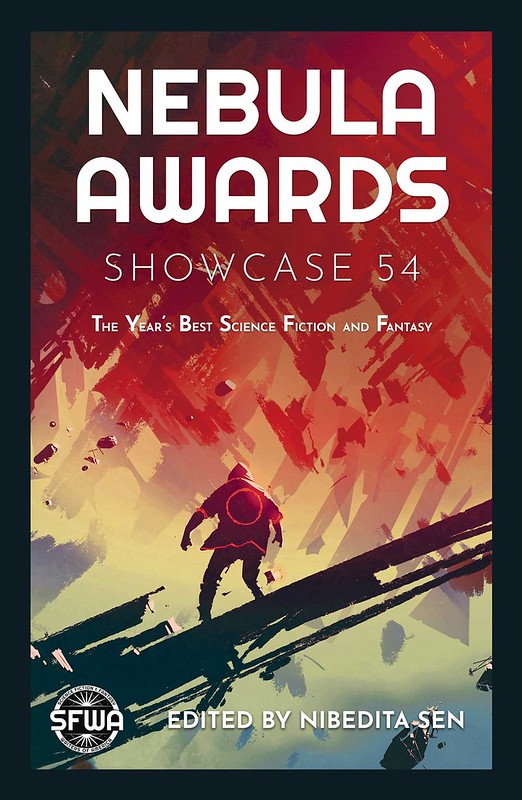 In today’s Big Idea, editor Nibedita Sen delves deep into the nature of the anthology she’s worked on, Nebula Awards Showcase 54, to examine what it is, what it means, and how to do honor to the concept.

What’s the purpose of an awards showcase? For that matter, what’s the purpose of awards? To honor the best and brightest in a field, you might say, but while that’s definitely a goal worth aiming for, it’s also one I’d go so far as to say is almost impossible to achieve. ‘Best and brightest’ has a tinge of meritocracy to it, and the fact of the matter is that SFF publishing has never been a level playing field. Even if we presume that honors are awarded purely on the basis of talent and nothing more, a work must reach readers’ eyes before its talent can be recognized, and marginalized voices are systemically denied the same exposure as their more privileged peers.

This doesn’t mean awards are meaningless—just that we must remain aware of the inequality built into the system, and continually boost underrepresented voices when and where we can. Awards can raise a writer’s profile and confer visibility in and of themselves. Award ceremonies can draw a community together in occasions of shared celebration and connection that open many doors.

Besides, if we accept that queer and/or BIPOC writers are unfairly disadvantaged, isn’t that all the more reason to celebrate their success when they earn it? Having your work recognized by the ‘establishment’ is a dubious honor, but it can be an honor, nonetheless, for those whom that establish has historically shut out and sidelined.

So, what’s the purpose of an awards showcase? I would posit two things.

First, to honor the contributors.

Second, to reflect the nature of the field at the time of the showcase’s release, and if possible, where the field is headed in the future.

Let’s start with honoring the contributors. Editing the Nebula Showcase #54 wasn’t an opportunity for me to self-aggrandize or dominate the stage; it was, in many ways, not about me at all. My task, and that of everyone who worked to bring this book into being, was to cast a spotlight on the writers whose fiction and essays were contained within, because they are deserving of praise, and deserving of honor.

Then there’s accurately representing the field. As we saw at the 2020 Hugo Awards, there’s an unfortunate tendency among the old guard of SFF to aim their eyes backward, choosing to recycle rose-tinted nostalgia for a bygone past rather than engage with the ways their field has transformed since then. In the process, they ignore the many ways in which that past was exclusionary, oppressive, and actively hurtful to marginalized voices.

As the inimitable Max Gladstone and Amal El-Mohtar said in their acceptance speech for This is How You Lose the Time War at those Hugo Awards, “[Y]ou can’t write back to the past. You can only write to the future.” SFF will look to the future or it will perish. You might think that true of every field of human endeavor, but it’s especially pertinent to SFF, the genre of projecting our imaginations forward and sideways. All art is political; SFF especially so. It’s why I chose to start the showcase with the two original essays written for it, both of which recognize transformation within the genre—the long-overdue inclusion of game writing as an awards category, and the truly remarkable, genre-changing piece of art that is Into the Spider-verse.

I could say more—but this TOC speaks for itself. The times, they are a-changing. Not always for the better, no, but editing this book, looking at the wonderful writers I am lucky enough to call colleagues, leaves me hopeful for the future. And, as I say in my introduction to the showcase, I can’t wait to find out what stories that future holds.

← The End of Casual Hugging(?)
The Dispatcher: Murder By Other Means Limited Edition Print/EBook coming in April; Pre-Order Now! →