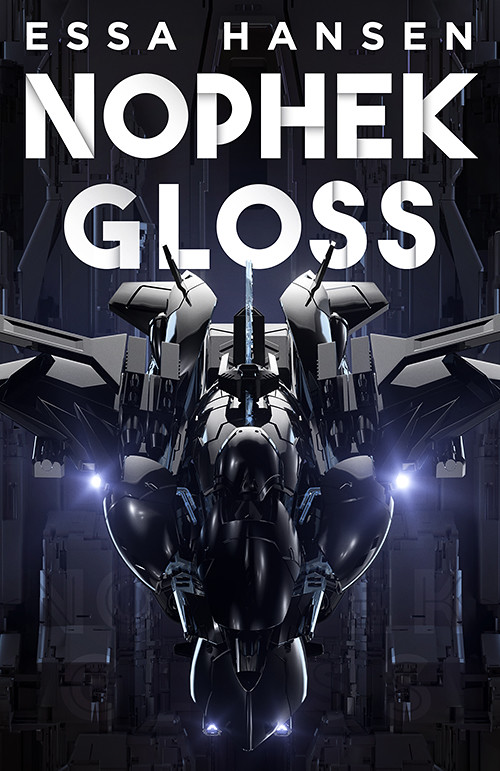 When given a choice between adventure and stability, what would you choose? When staring the unknown in the face, do you choose to explore it, or stay in your comfort zone? Author Essa Hansen asks the tough questions in the Big Idea for her newest novel, Nophek Gloss.

Which would you choose: a safe, predictable utopia or a dangerous frontier of rich new experience?

Science fiction often centers on confronting the unknown, either because it’s sought out—“to boldly go where no one has gone before,” says Star Trek—or because the unknown has intruded on a comfortable world. A protagonist embarking on a quest of any kind is choosing adventure over comfort, but when there’s no threat to the world, no Dark Lord or “Call to Adventure,” what would the majority choose? Are the adventurous too foolhardy, and are utopians stunted by lack of challenge?

I’m endlessly curious about the big idea of how we value the safe and predictable versus that which is risky yet promises unique experience or gain. Humans may have an inherent drive to explore and expand as part of our survival instinct, but at the same time we so often fear the unknown. One thing I love about this genre is that it neatly explores both of these traits together. At the same time, readers get the best of both: to mentally explore new ideas and worlds from complete physical safety.

I wanted to explore this dichotomy of safety versus discovery in Nophek Gloss, both in the protagonist’s themes and the physical world on a huge scale. The bubble multiverse is perilous: physical laws vary between universes, and might transform or destroy things that pass from one to another. Species for whom transformation is normal might not fear this “removal of the permanence of being,” but humans and species like them find comfort in identity and predictability. Who heads in first when faced with a universe never before entered, which might fry the skin off you, or transform your parts or functions? Granted, it’s possible that transformation might make you better.

At the heart of these many worlds lies Unity: the original universe from which the others bubbled off, massive and unbroken, with stable physical laws that are completely understood. Unity is ruled by a government dedicated to creating one perfect dimension where anything is possible. Those who value safety and order congregate here to enjoy free energy, perfect health, and expertly managed economy and ecology. Would you live in such a place, or does this sound like a boring reality? Are mental frontiers broad enough to keep such a world engaging?

In contrast, the outer multiverse is a messy situation of mysterious worlds full of unpredictable dangers. Seeking profit, explorers dive into new territory and traders exploit translations between universes. Is novelty worth the risk? Cartographers make the multiverse safer by selling knowledge and chartings while paying for new data retrieved, incentivizing explorers to carve into the unknown. Slowly they are uniting the multiverse through shared understanding of its variety—but is that enough to stop war and exploitation?

I quickly realized it would take more than one book to explore this big psychological idea in the physical world. However, these themes embedded in the first book’s central character. Caiden’s arc begins on an isolated world with a singular function. His life is safe, he’s provided for, his knowledge limited and tasks predictable—but he longs for more understanding.

Caiden ends up thrust from safety into a mature world of diversity and danger. He struggles with complete sensory overwhelm, PTSD, reactionary impulses, and visible oppression in this immense world—all of which drive his choice to throw himself at danger and into new experiences that he’s unequipped to navigate. The adult cast around him tries to steer him back to safety, but his momentum toward justice and his idea of his purpose is all that’s keeping him together.

Usually heroics are successful and glorified, but Caiden faces insurmountable obstacles, frequently missteps, and makes heroic choices that aren’t rewarded. Like all of us, Caiden comes up against “safety versus discovery” in everyday choices big and small: do we challenge ourselves, do we risk, do we do the thing that might hurt? Or do we stay in our comfort zone, seek stability, set boundaries? Do we make that move across the country, will it be better? Do we stay with our partner and try to work things out, or move on alone? Do we keep walking when we see discrimination, or do we risk a fight and step in? I personally like to define big ideas as those that apply broadly and continue to make me think more deeply about the choices I encounter day to day.

So, which would I pick of the two? While it’s appealing to think I could perfectly craft a reality of my choice, with all the successes and material luxuries I want, I believe there is something to be said for being surprised. Delightfully surprised, one would hope, but even challenges and dangers have huge value, for through them we grow in myriad ways. I can look back at dark times that shaped me, and add sweet into those bitter memories, because if I had picked the easier road, would I be the same person, would I now have big ideas such as this?