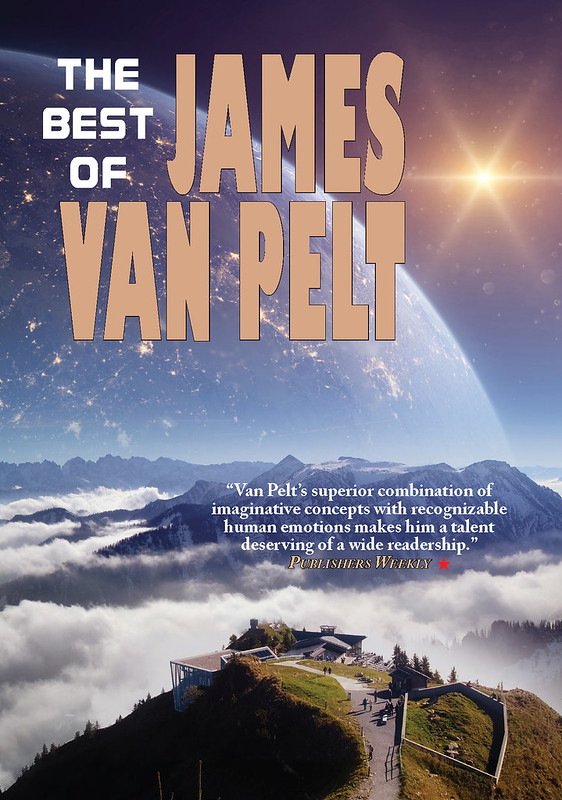 What would the inside of your head look like if someone went exploring in it? What is behind the closed doors of your mind? In author James Van Pelt’s Big Idea, he invites us to tour the back alleys of his creativity, and tells us of how he tries to fit all that into his new collection, The Best of James Van Pelt.

Imagine entering a huge, windowless building in the middle of the night. The doors slam behind, plunging you from the starlit darkness to utter blackness. Feeling blindly along the wall, you find no light switches, but you have been tasked with reporting what’s inside the edifice.

You do have a camera with a flash, so you point it toward what you imagine must be the middle of the room and trigger it. A tiny fraction of the building’s character has just been revealed and captured. You spend years wandering, finding your way by touch, through hallways, up and down long staircases, opening doors, hearing weird sounds: music, voices, animals, machinery, weather, rocket ships, armies, lovers, screams, laughter, and stifling silence in long stretches, all the while taking pictures.

You’re not sure, but some pictures seem to be of aliens, monsters, dinosaurs or children.

When you stop to inventory, after wandering with your camera most of your life, knowing you’ve only scratched the building’s surface, you realize that you’ll never be able to photograph it all.

You have been exploring the house illimitable.

That’s what collecting three decades of publishing short stories is like. The big idea of The Best of James Van Pelt is that the stories create an outline of my obsessions, neuroses, fears and hallucinations.

When I taught high school English, I asked students to find books to read for fun, and then to report what they read to the class. These were low-key book reports. I didn’t want them to do deep literary analysis. I told them to treat the class like a bunch of friends and that they were telling them of a book they just read. What was the book about? What did they like? What was cool? Who else might like this book? That kind of stuff.

Occasionally a student would pick one of my novels or short story collections. Our school librarian shelved all my books (which is why I generally have a PG-13 sensibility in my stories). A student reading a book of mine made me vaguely uneasy. How intimate writing is! I was afraid they’d finish and learn too much about me. That’s what Mr. Van Pelt thinks about? Gross!

What they would find is that I think about high school classrooms both from a teacher’s and student’s point of view quite a bit, but the classrooms always have fantastical things happening in them. I like old movies. I like outer space. I like plucky people who struggle against their fates. I like musical lines of words that trip off the tongue well, and mythology and dreams and regular people struggling with the surreal as if the surreal were ordinary. I’m fond of the occasional ghost story.

What they wouldn’t see are the few stories that are my favorites. Other authors have told me that I’m not alone in hoping that readers would perk up at certain stories. Sadly, my favorites and readers’ favorites don’t often coincide. Everybody’s taste differ, but I want you to know that I’m particularly proud of “Nor a Lender Be” because the protagonist is my ideal teacher, “Night Sweats” with its combination of ghosts and the WWII birth of the nuclear age, “The Radio Magician” with its undefeatable optimism, and “The Hareton K-12 County School and Adult Extension,” which is my homage to Bradbury’s “There Will Come Soft Rains,” a story with an inanimate object as a sympathetic character.

Oh, and “The Silk Silvered Skulls of Millen Mir,” which dramatizes everything I love about books and reading.

A common piece of writerly advice is “Write what you know.” I don’t think that’s helpful since if you took it literally, everything would be strictly autobiographical. A better suggestion is “Write what you think about.” It’s better, but not easy. Most students, I’ve found, don’t really know what they think about. It’s akin to asking fish to identify water. What people think about is so integral to who they are that it’s hard to step back to look at the thoughts. I know because it’s taken me a while to identify what’s going on in my head. Once I started doing it, though, my stories improved. I quit writing what I thought a story should be, and I started writing what truly mattered to me. Regardless of what got me going on the writing of each piece (a snatch of dialogue, an odd image, a bout of indigestion), at some point I had to stop and ask myself, “Why is this important? Why do I care?” I couldn’t continue writing until I answered those questions.

Writing, all writing, whether I mean it to be or not, is an act of self-exploration. I hope the stories are entertaining to others, but they aren’t written just for an audience or to earn a payment. They’re snapshots in the house of my head.

And that’s the big idea.

← This Vacation Blows
I Was Going to Write a Political Piece Today But Then Was Struck By Ennui, So Here’s a Relatively Obscure Men At Work Song Instead →