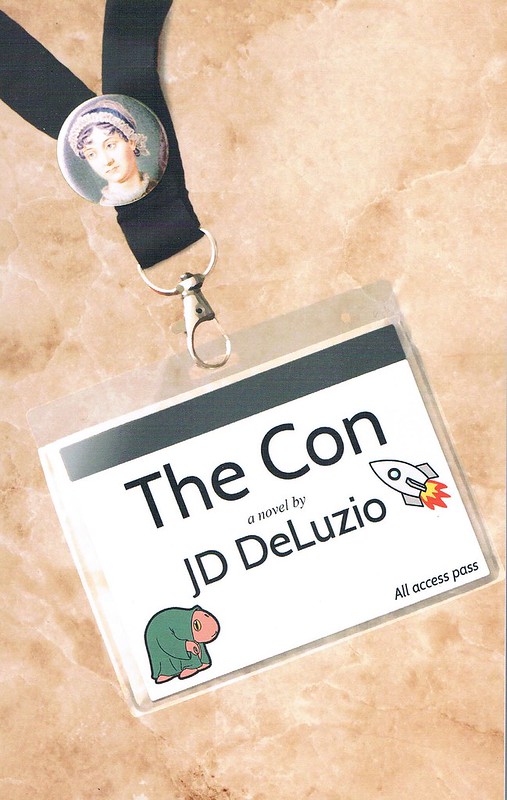 The word “con” has more than one meaning, and for JD DeLuzio’s debut novel, The Con, this is a very very relevant fact. Read on to discover more.

A woman recalls the arrival of Haile Selassie to Jamaica in April of 1966, and the seven mystic white flying greyhounds that swept down from the heavens and escorted his plane. No one else reports this wonder and none of the media present records it. But she firmly believes it. Perhaps a decade after the event TV brought her to me, a child living in a religious, but not fanatical, household. My father, the Canadian-born son of Italian immigrants, was Roman Catholic. My mother grew up exposed to a number of Protestant traditions. Her maternal grandfather had been a Methodist minister, she attended a Baptist Sunday School, and some of her relatives joined the Salvation Army.

Both my parents had careers based in science and technology. They understood critical thinking. The Old Testament—the earliest books, in particular—they read as poetic metaphor, written for a time when human beings understood the world differently than we do now. They were a little stickier about the New Testament: that had happened pretty much as reported. Inconsistencies were something devout folks just had to wrestle with or accept on faith.

Outrageous beliefs from other groups, of course, could be dismissed. Flying greyhounds? Blame the ganja.

I’m no longer a devout anything, but I’m steeped in religious tradition, and keep copies of every major sacred book by my bedside. I have given skeptical-leaning seminars on folklore and the paranormal. I’m also a long-time SF fan and a member of the Jane Austen Society of North America. These things (among others) shape the world I see.

So I wrote a novel called The Con. It unfolds at a hotel hosting both an SF Convention and a smaller meeting of Janeites. The principal narrator insists there’s also an actual alien present. The novel sold because the publisher liked its characters and carnivalesque plot, and that’s what most people take from it. The Con concerns the usual things: characters, personal conflict, intrigue, misunderstandings, star-crossed lovers, robot battles, and so forth. But like all books, it holds ideas.

Fandom and faith, for example, have a lot in common. Devotees read relevant texts. We gather in groups, honor our saints, wrestle with contradictions, develop rituals, and engage in activities that outsiders find bizarre and occasionally alarming.

We don’t believe in the literal truth of our stories—not if we’re sane– but we see the world differently than others, because those stories affect our conceptual lenses.

Telfryn Tyde, The Con’s guide through the chaos, insists that an extraterrestrial probe guided by a simulacrum of an alien researcher named Azogo latched onto his brain years earlier. If he’s telling the truth, The Con is SF. If he’s delusional or yarn-spinning, it skews realistic. Of course, neither genre nor reality need be either/or (bilaterally symmetrical species love too much our binary metaphors). Azogo’s existence, for example, would not preclude Telfryn also being disturbed. Indeed, he claims his sporadic mental breaks result from alien activity.

Others characters encounter Azogo, which is doubly odd, since (1) Azogo may not exist and (2) if it does it’s supposedly a computer emulation of some alien’s brain. Is Telfryn inserting an imaginary extraterrestrial into the narrative? Is the growing brain-to-brain interface causing others to see what Telfryn sees? Is he attaching a long-standing delusion to a really impressive work of cosplay? Has Azogo itself, or another of its kind, finally arrived on earth? In fiction, carefully-phrased writing can sustain the uncertainty.

Our secondary narrator tries to maintain an Austenian style. Her account continually breaks against circumstances Jane would never have imagined. Sometimes we need to change our metaphoric lenses.

The characters, like real humans (and the inhabitants of Azogo’s world, Uirtkauwea’ki), see through lenses which limit their vision, and are driven by things which may or may not be real. Religion shapes two of the characters’ thinking, socio-political views are not absent (It’s not just Fen and Janeites who clash. Our con mixes Canadians and Americans), music plays a key role, and feelings, love especially, drive everyone.

Religion? We do great things—good and evil– in its name, with very little evidence to confirm the existence of our particular flying greyhounds.

Politics, which has dire consequences, gets organized into fantasy league teams called “parties.” These often get defined by the binary metaphor of “right-wing” and “left-wing,” as though the beliefs and members of each team necessarily belong together. In the American model, unrestricted capitalism, denial of rights to queer folks, and access to firearms all end up on the “right-wing” side, despite those concepts having no intrinsic connection. The “left-wing,” meanwhile, gave you president and vice-president elect Joe Biden and Kamala Harris, who on my side of the border would fit comfortably with the Conservative Party. Harris could run for the Liberals, but she’d definitely be on their right flank. (Some Americans believe that Biden and Harris didn’t win, and that belief, though demonstrably false, will have far-reaching effects).

Music? My wife, a soprano, has a voice that moves people, sometimes profoundly. I have seen and felt it. But to what end? Music matters so much that no human culture exists without it, and yet it serves no easily-defined purpose.

Love? We’re often most motivated by emotions, which, viewed objectively, are unstable states based on chemical reactions.

And so I wrote a book that concerns several characters and their adventures in the carnival world of a con. You need not read for any more reason than that. However, along the way, those characters pose questions about the illusory, ineffable forces that motivate and define us.

A con, short for convention, is a gathering of like-minded people. A con, in another sense, is a deliberate deception. We must continually ask if the things moving us are really real, or just a con.

← I Was Going to Write a Political Piece Today But Then Was Struck By Ennui, So Here’s a Relatively Obscure Men At Work Song Instead
Showcasing My Collection: Enamel Pins, Volume Two →