Because, hey! Just because I haven’t done one for a bit doesn’t mean I can’t do one now. 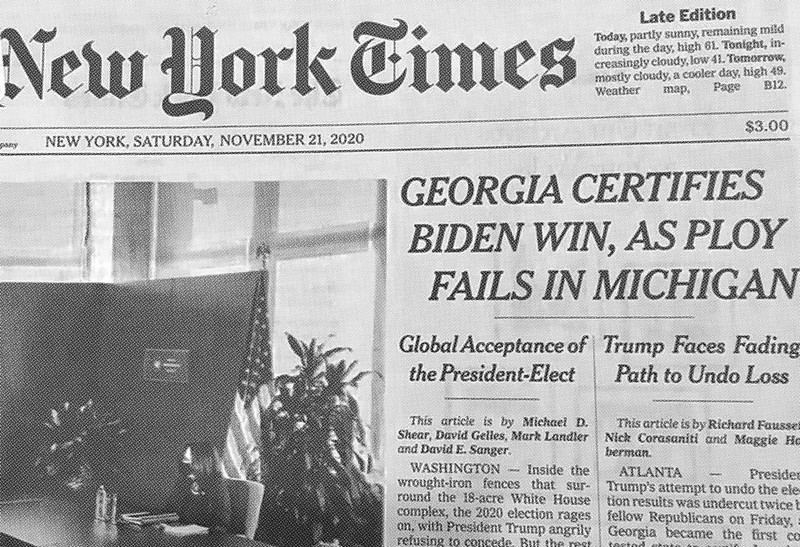 Trump loses again, again: Yesterday saw Georgia definitively go into the Biden win column, and (presumably) Trump’s grand plan to steal Michigan via the state legislature go into the crapper. There may yet be Michigan drama if the state certification board does some dipshit thing, but the remedy for that is straightforward. Trump also got dunked in Arizona and Nevada yesterday (the latter being a court case he didn’t bring but was relevant to his interests). It’s become increasingly difficult for Trump to even pretend he can steal the election, and by and large, the actual adults have been moving on. There have been rumors that Trump knows he lost, he just wants to be an asshole about it, which is, of course, on brand for him.

I do think there’s a bend in the curve where Trump’s bullshit starts hurting him even with base, and that we may be near it. Not with the full-on racist crapbags, of course; they’ve signed up to be conned by him long-term and aren’t going to back down now. But the ones who voted for him and may have had some concerns about vote fraud, based on what they’d been told by semi-legit sources, may begin to hike back to reality. It may take longer to insult their intelligence than I would like, but eventually you do get to that point, and I suspect the multiple court defeats and Giuliani literally melting down have begun to take their toll. It doesn’t mean they’ll suddenly support Biden, mind you. Merely that the magic is over and the longer Trump keeps this nonsense up, the fewer supporters he’s going to have at the end of it.

I know. Call me optimistic.

Adios, Arecibo: This makes me hugely sad: The massive radio telescope in Puerto Rico is being retired after having taken too much damage recently. Like any space geek, Arecibo always loomed large in my imagination, and honestly seemed to be to big to fail — but fail it has. It has a pretty good run of nearly 60 years, however, which in itself is an impressive feat; there’s not a lot of tech that stays in use that long. I’ve been to Puerto Rico a couple of times, and both times I could have taken a tour of the telescope but chose not to. Fool! I’ll not get that chance now.

More love for my Pixel 5: I noted this yesterday on Twitter:

Just a note about the Pixel 5 battery life: it's ridiculously good. pic.twitter.com/Bdf8ro1nGJ

If you can’t see the tweet. It shows a graph with the battery of my Pixel 5 at 38 percent after about 30 hours of use. I got another four hours out of it before I plugged it in; it had gotten down to 17% by that point. I’ve never gotten that sort of battery life out of any phone I’ve had before, and certainly not out of a Pixel. Yes, yes — let’s see where we are a year from now. But I’ll tell you what, for now, I’m loving this phone, and not just because of the battery. Nor am I the only one — I’m seeing a fair number of articles like this, in which the author sort of amazedly admits to really really liking the Pixel 5, despite other, higher-specced phones being available. It’s apparently the mid-range phone that could.

Alan Dean Foster: Speaking of my Twitter feed, I was reminded that a lot of you who visit here don’t pay much attention to it, because I’ve gotten emails and other queries asking why I hadn’t written about Disney stiffing beloved SF author Alan Dean Foster out of royalties. In fact, I wrote extensively about it on Twitter, the gist of which is this:

As I noted yesterday, Disney attempting not to pay Alan what they contractually obliged to pay him is bullshit, and the company fronting a legal argument that they've bought contractual rights but not contractual obligations is bullshit AND dangerous. Pay him! #DisneyMustPay https://t.co/IHXTS9Y5Le

I’ve been pleased to see that Alan’s cause has gotten some traction on social media and at news sites, but honestly it should have not taken SFWA shaming Disney in public to deal with this. Alan’s royalties are probably a very tiny percentage of the craft service budget on a Marvel shoot; Disney will not miss what they owe him. Which is neither here or there about whether they should pay him — he’s got a fucking contract, of course they should pay him — merely to make point that Disney bought itself a lot of public shame over a sum that’s relatively trivial to the company, but which actually matters to Alan. Inexplicable.

Krissy and Smudge: I think this is my favorite picture yet of the two of them. 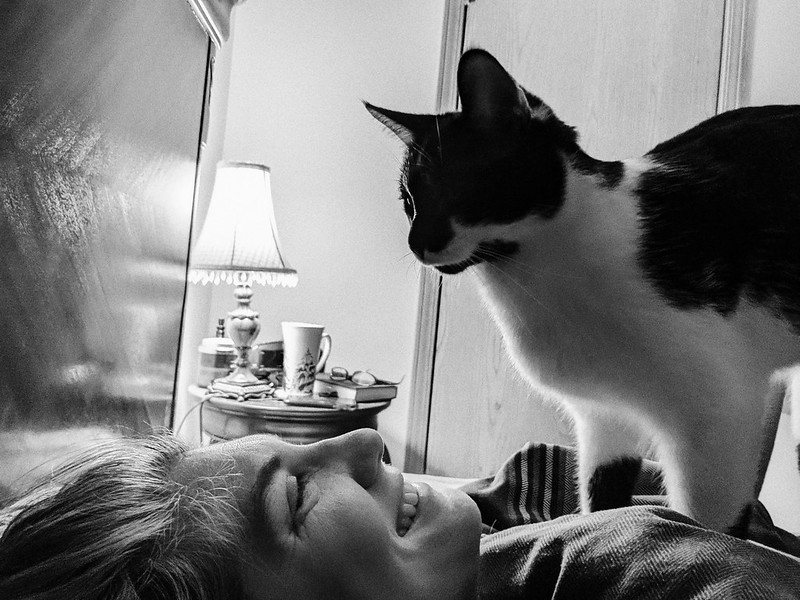 It pretty much captures both of their personalities, which is what you want a picture to do. And of course, they are both ridiculously photogenic.